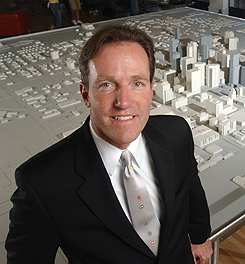 On Thursday, The School of the Art Institute of Chicago named Wellington Reiter, an architect and urban designer as its next president, a choice reflecting the broadened scope of its disciplines.

After considering candidates since the fall, the school selected Wellington Reiter, dean of the college of design and an architecture professor at Arizona State University in Tempe, Ariz., for the last five years. Before that he was an associate professor at the Massachusetts Institute of Technology. He is to start Aug. 25, four days before his 51st birthday.

Reiter will succeed Tony Jones, who has led the school for 18 years, a period of great expansion in enrollment, programs and Loop real estate for the school. Jones will become chancellor for a year and then retire.

Jones said the school sought the best candidate, not necessarily one with a design background. He said he thought Reiter would further efforts to “rebalance” a curriculum that once was weighted toward the fine arts but that now includes fashion, design and architecture, media and technology, and the humanities.

Reiter said he would try to smooth the relationship between art and design and would consider literally breaking down walls if more-open settings facilitated instruction and discourse.

The private school’s reputation has spread widely-18 percent of last fall’s 2,932 undergraduate and graduate students were from outside the U.S. But Reiter said the school needs to raise its profile in and “deepen its engagement” with Chicago.

He said he plans to introduce himself to all the design firms here. He said he met Mayor Richard Daley in April when they both spoke at a conference in Phoenix. Reiter’s topic: the 1909 Burnham Plan of Chicago.

The School of the Art Institute has about the same enrollment as the college of design at Arizona State. As that school’s dean, Reiter helped shape a major expansion of ASU’s Phoenix campus, a project transforming the downtown. He also lobbied for a $879 million bond issue passed by Phoenix voters in 2006 that allocated about $232 million to the new campus.

“That project is under way and, frankly, doesn’t need my supervision,” he said. “I am not leaving anyone in the lurch.”

ASU President Michael Crow said Reiter “has been a force within ASU and in metropolitan Phoenix. It is no wonder that other institutions have had their eye on him.”

Reiter also has worked on projects in Boston, Philadelphia, Pittsburgh and Ft. Worth, Texas. He has designed public art, buildings and museum installations, and his architectural drawings are in the collections of several museums.

Reiter has architecture degrees from Tulane and Harvard Universities. He is married and has two sons, ages 20 and 17.