The twentieth-century saw an influx of artworks and movements de-centring objecthood in pursuit of the immaterial, from the Modernist reduction of the traditional art object, to Conceptualist and Fluxist instructions for artworks, often created in the mind. It also came in the form of performance works and happenings privileging experiences over object encounters, audio installations and walks that construct and enliven spaces, and even olfactory art. Then there are artists who obscure their own artwork and biographies, like David Hammons, who recedes from the commodification of the art world by shirking interviews and galleries, and has camouflaged his work amongst a shop’s merchandise so that the viewer can’t tell one from the other. 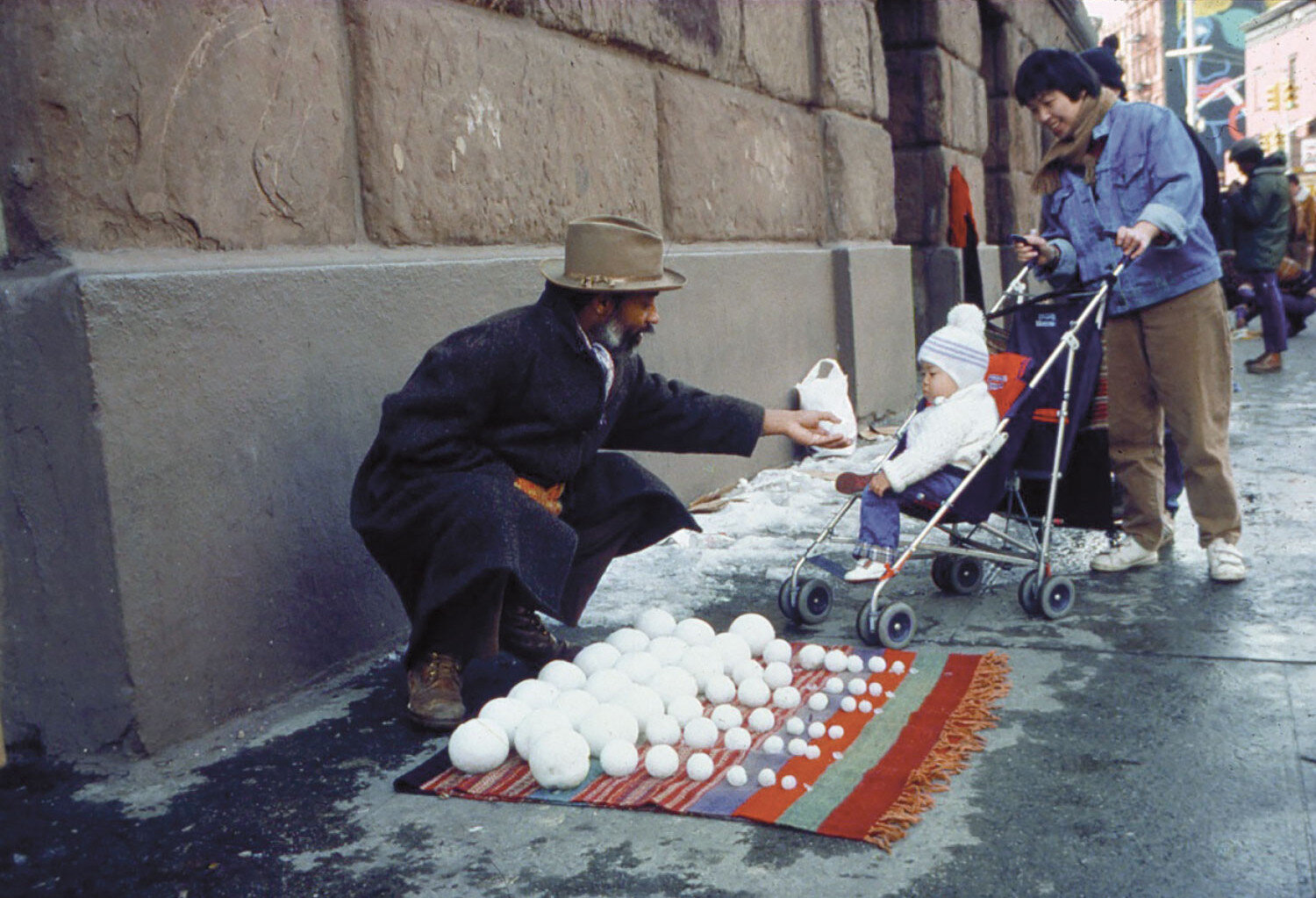 In 1985, Jean-François Lyotard’s and Thierry Chaput curated the iconic Les Immatériaux exhibition at Centre Pompidou. As a philosopher cum curator, Lyotard’s aim was to create a context where linking scientific and artistic modes of thought was encouraged, where artists became philosophers asking, “why does something happen rather than nothing?”, and where the exhibition itself became an artwork. He believed that all the progress made in the arts and sciences was (mistakenly) working toward knowing objects, be they objects of thought or of matter. Yet in an interview with Bernard Blistène for Flash Art magazine, Lyotard described the ear as “the material for the reception of the message,” hinting at a truth behind the appearance of emptiness: the immaterial is also material. The stem of each derives from the Latin mater, meaning ‘mother’ – the chicken of the proverbial egg. Nothing can be created from nothing. Matter rearranges itself, transforming solid to liquid to gas. Water droplets containing trace minerals build stalactites. The sweet, burning garlic fumes of bis(2-chloroethyl) sulfides suspended ‘invisibly’ in mustard gas cause skin to blister and lungs to bleed. Immaterial horror, quick and calculated, and immaterial beauty, requiring eons to show face. Cells in a slide filtered through light zigzagging between the mirrors that expose them. Knowing how shit tastes from how it smells. The porous microfilm that is the boundary between absence and presence is telling. 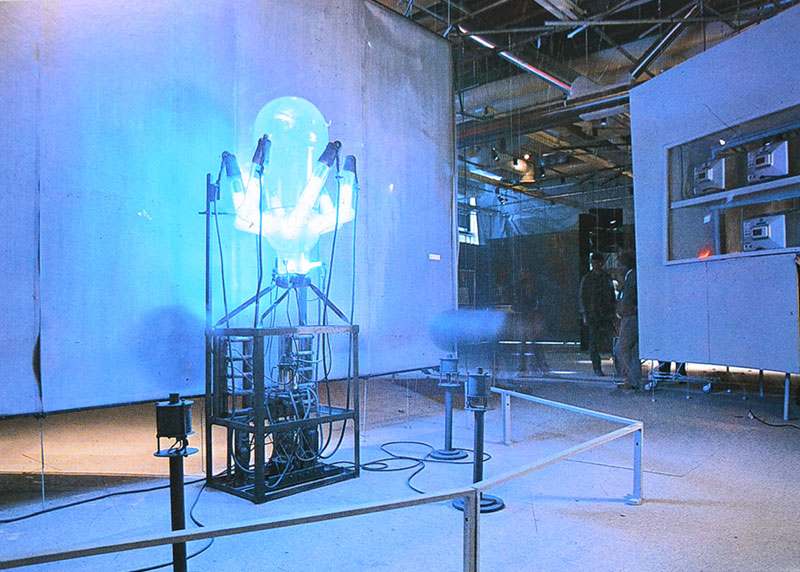 As an artist, my works tend to be about as material as work can get. However, I do have a penchant for works that fall on the material edge of alleged immateriality, and have one work in particular that oscillates in this way. This year marks the fifth anniversary of the installation of my permanent public artwork, “Galleryfill” in Saint John, Canada, commissioned by Third Space Gallery. To make the sculpture, unwanted artworks were collected from artists in the City of Saint John, and Chicago, Illinois, where I was living at the time. These unwanted artworks were then used to produce an underground gallery installed to landfill standards by layering stones, sand, clay, leachate barriers and felt. A granite plaque in front of the sculpture provides a short description of the work, leaving the contents of the resulting modest hill to the viewer’s imagination. This marking of time has me thinking again about material-immaterial works that inspire me. 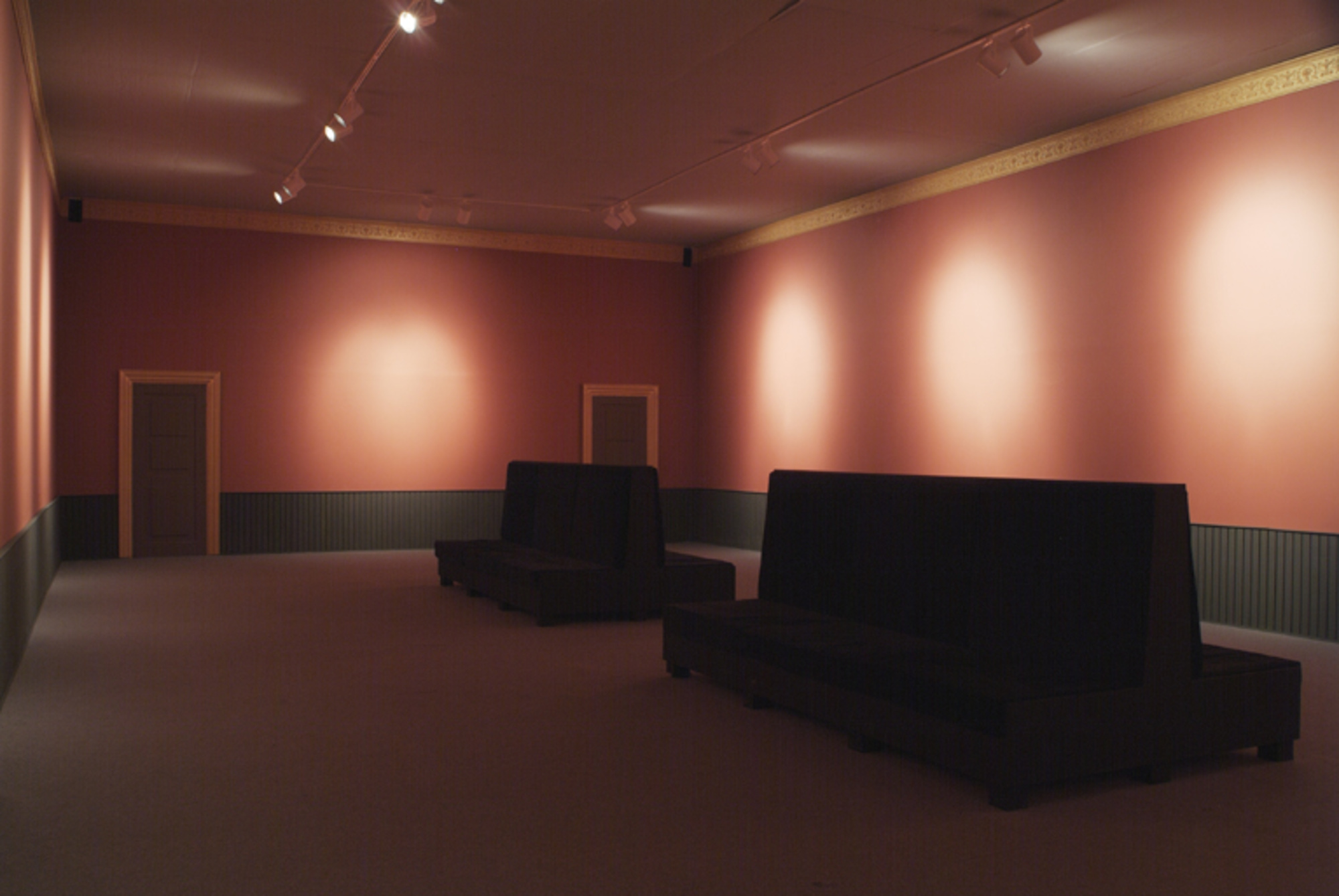 Ilya and Emilia Kabakov, “The Empty Museum,” The Sculpture Center, 2004

One way to produce such works is by sculpting ‘nothing’ in proximity to something – a form of staging, really, like an effortful John Cage. Take for example artists Ilya and Emilia Kabakov, who create artworks that reimagine life in the former Soviet Union. In their 2004 piece titled “The Empty Museum,” the pair replicate a 19th-century gallery inside of the exhibition space, complete with red walls, wooden baseboards, stoic viewing furniture, and track lights that showcase the lack of art the walls, all while overtures of Bach’s Passacaglia plays over the room’s speakers. The melancholy and institutional criticism built into this both stark and gratuitous artwork takes on new significance when considering the literal swan song of Russia’s last independent radio stations, as they protested their closures to the tune of Tchaikovsky’s “Swan Lake.” A related work by Teresa Margolle treats the institution as a container for macabre air. The piece, titled “Air/Aire,” is a simple but chilling gesture: the air of the gallery is cooled and slightly humidified by means of an air conditioner, one that runs on water once used to cleanse unidentified corpses in Mexico City prior to their autopsies. We find ourselves inside of a grisly “Condensation Cube,” our bodies kept alive with climate-controlled air laced with the physical traces of death. 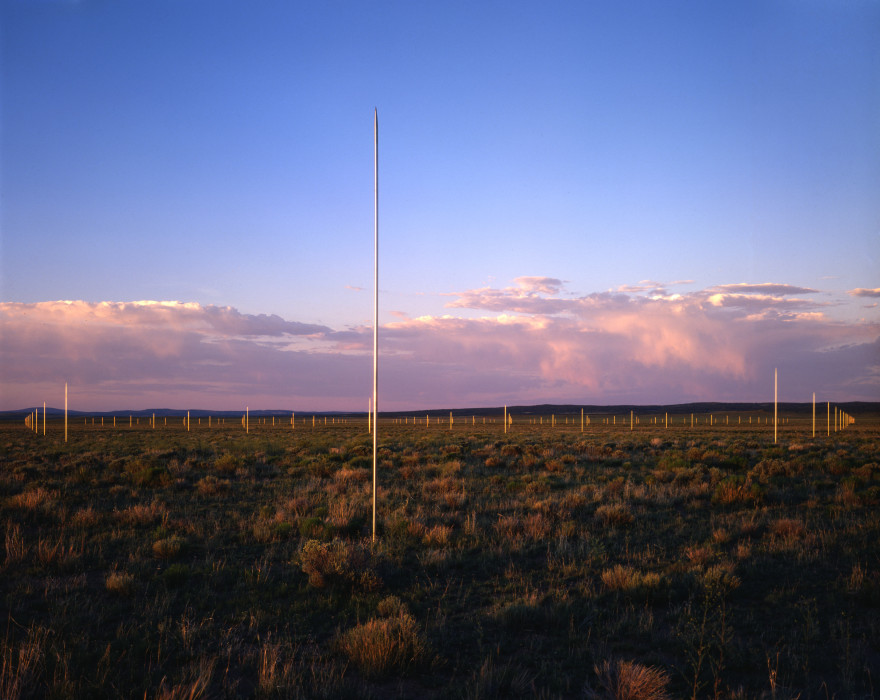 There is also a charged absence in the literally electrifying tension produced by Water De Maria’s “The Lightning Field” (1977), located in a remote desert in New Mexico. This piece is known in the public imagination through iconic documentation in which several of its 400 stainless-steel poles are lit up with angry, jagged bolts. However, when scheduling a visit to witness such sublime electrical currents, one is forewarned that seeing lightning is, of course, not guaranteed. Nonetheless, many visitors who’ve gone and seen only poles and sunsets insist that the piece is observably electrified, with or without the lightning. De Maria may just be the master of the material-immaterial genre. A piece that I have yet to witness in real life, but which has impacted my imagination for at least a decade, is his “Vertical Earth Kilometer” (1977) located in the Friedrichsplatz Park in Kassel, Germany. The piece consists of solid brass rod that measures one-kilometer-long and five centimetres in diameter, the full length of which is inserted into the earth. The only visible trace of this monumental earth work is a brass circle flush with the ground – the top of the rod. De Maria has created a deeply material reality of brass and earth and depth, with a nearly exclusively imaginary presence. I get tingles every time I think of this work, which it will be my privilege to experience in the flesh at Documenta 15 this June. 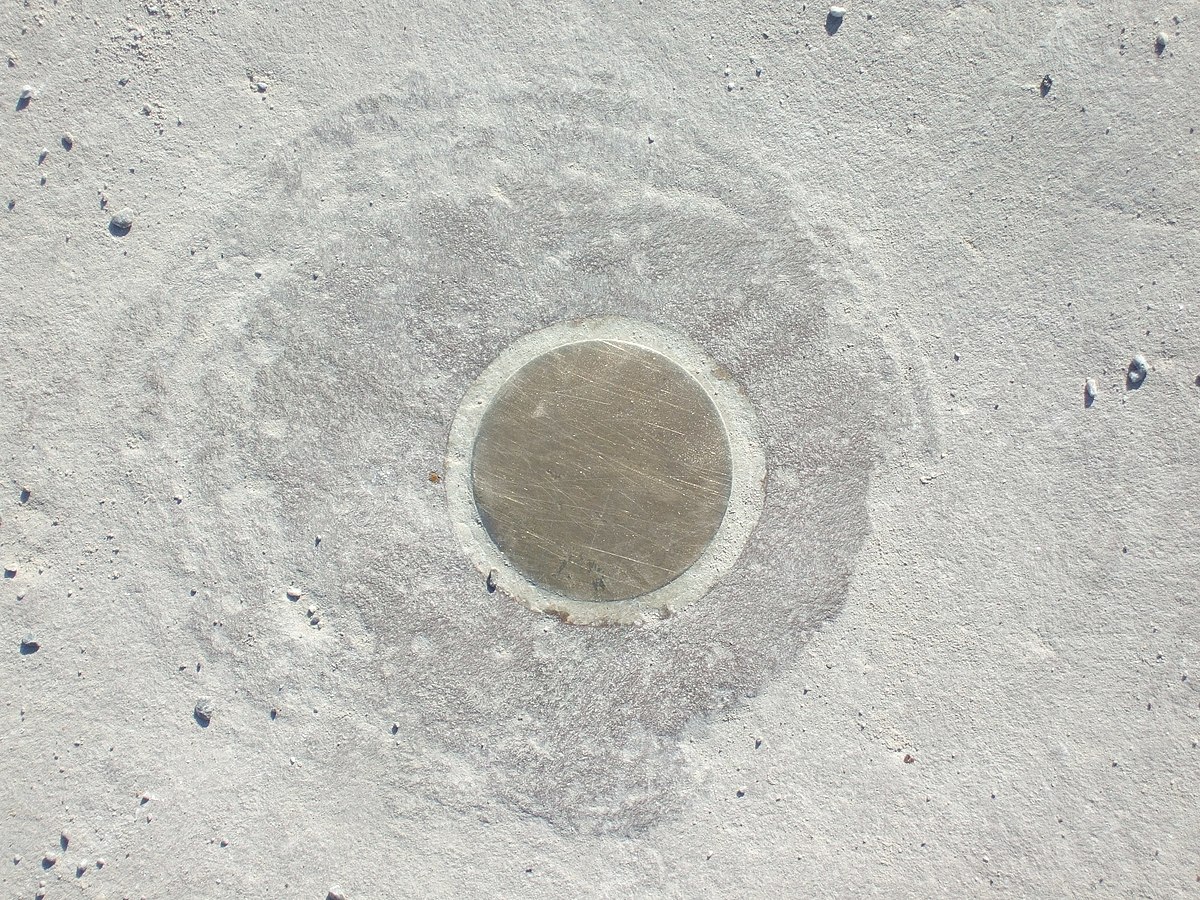 Then there are works that emanate and off-gas, like Robert Barry’s “Inert Gas Series” (1969). For these works, the artist released five volumes of odourless, colourless noble gasses into the atmosphere in various locations around California. For Barry, this was an exhibition with neither location nor date, publicized via a blank poster. He describes these gases – helium, neon, argon, krypton, and xenon – as beginning from “a measured volume to indefinite expansion.” Documented only by some suggestive images of gas canisters and landscapes, this series had a physical, atmospheric impact that Seth Siegelaub described as “definitely changing the world, however infinitesimally […] Something real but imperceptible.” The inverse of this work can be found in Barry’s “Radiation Piece” (1969), which is comprised of a tiny amount of caesium-137. Caesium-137 is a radioactive isotope released into the environment during nearly all nuclear weapons tests and in some nuclear accidents, most notably Chernobyl and Fukushima. Though it distributes fairly uniformly throughout the body, it mostly affects the pancreas, and depending on the exposure, can be *fatal. It has a biological half-life of 70 years that can be decreased to 30 with the aid of **Prussian Blue. One has to wonder if Barry was aware of Yves Klein’s proposal to paint A- and H-bombs in his patented ultramarine pigment, even requesting that “not only the explosions but also the ‘fallouts’ ought be inalterably tinted in blue by my IKB procedure.” In his Dark Ecology, Timothy Morton suggests that we take our plutonium and place it in the town square, thereby putting to rest NIMBY once and for all, and making it a public responsibility to manage and store the ***hyperobjects we’ve produced over the last one hundred or so years. 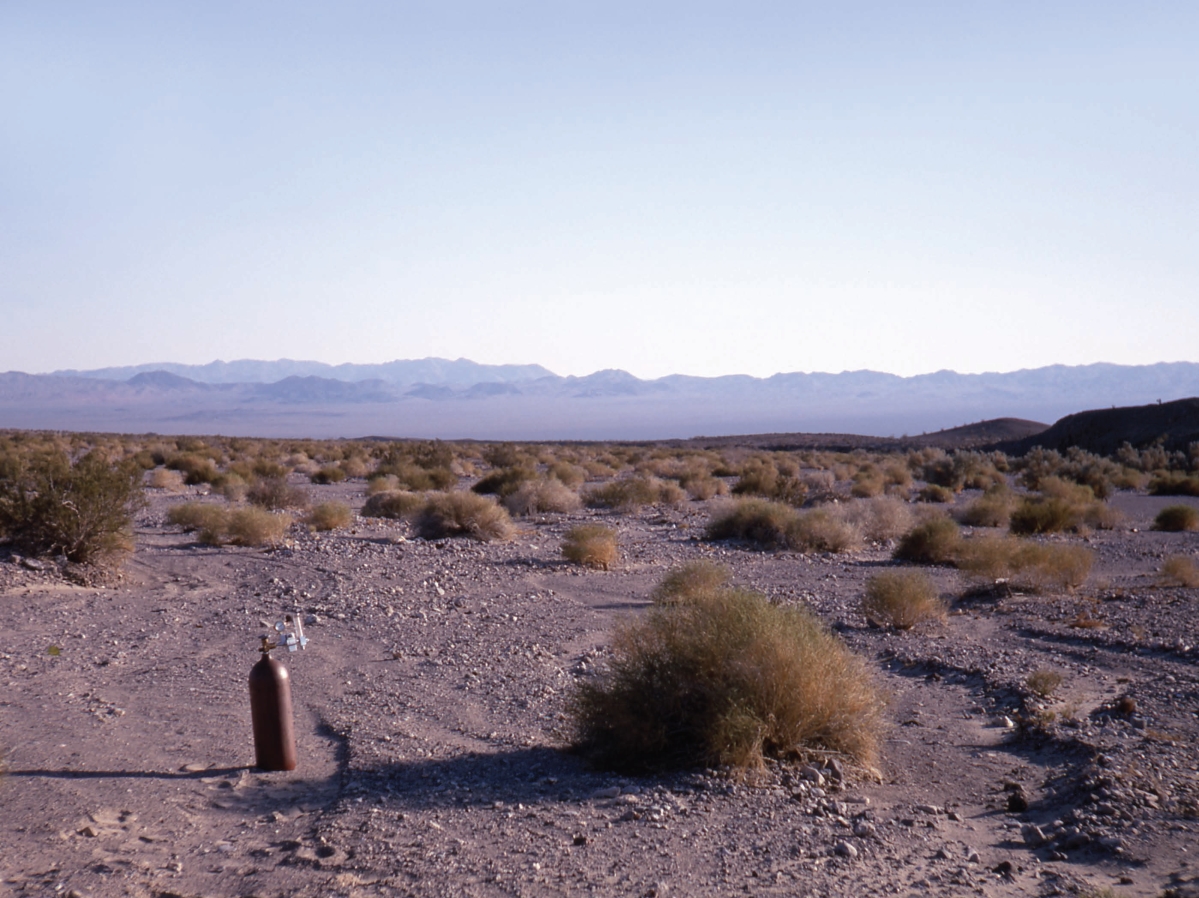 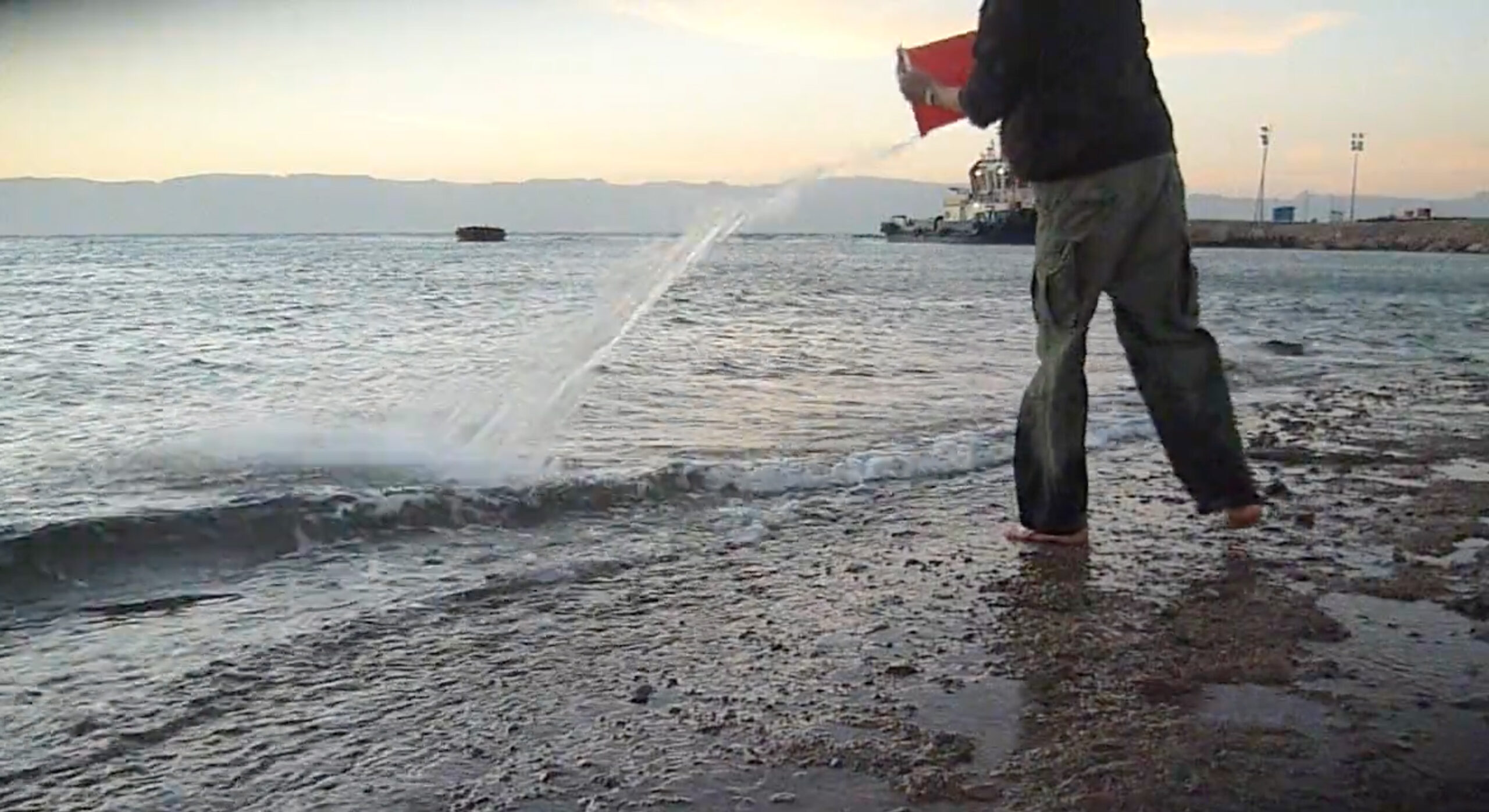 Another means to evoke the immaterial via the material is by doing perceptibly (or literally) nothing with something. As a lifelong Buddhist and a Fluxist artist, Nam June Paik had more than one motivation to seek the void. His “Zen for Film” (1965) does as much to showcase a meditative state of blankness as it does the dust collected on the 16mm film. Seen in person, the film hums steadily to the tick of the projector, while light produced by the bright white projection creates shadows that implicate other viewers sharing the space. These viewers seem to either exit as quickly as they entered, or succumb to mesmerisation like flies to fluorescent. Perhaps my favourite performance artist of all time, Francis Alÿs is as much poet-philosopher as political critic. In a beautiful work titled “Watercolor” (2010), Alÿs documents himself filling a bucket with water from the Black Sea in Trabzon, Turkey, and then pitching it into the Red Sea in Aqaba, Jordan – a distance that spans 1600 kilometres. The video, a mere minute and twenty seconds in length, is rife with symbolism, history, and metaphor. The Black Sea has always been an important connection point between Asia and Europe, with a storied history that has most recently become a battleground for confrontations between Russia and Ukraine along the coast of Crimea. The year this work was created, these two countries signed the Kharkiv Pact treaty extending Russian naval access to these waters, beginning what would come to be an over decade’s long buildup between the Global West and affiliates of Russia over the identity and future of Ukraine. Meanwhile, in the Red Sea, we find an aquatic link between Africa and Asia shared by some of the most troubled (and powerful) countries in the region. With its deep its religious history, its ties to slavery, and its strategic military and trade advantages, the Red Sea has borne deep narrative significance to many, from the book of Exodus’ accounting of the Israelites crossing its waters, to West Africans who traversed it on ship in Medieval times for their “hajj” – the pilgrimage to Mecca. In these two seas blood has been spilled, oil has been extracted, coral has flourished, and spices have been traded. The deepest waters in the Black Sea are anoxic, acting as a perfect tomb for the preservation of sunken ships from 500 BCE to present. Black defies distance to meet red, and in their mixing some new substance (a colour?) is made. You can’t see it, but it’s there.

*It is difficult to find documentation or descriptions of how this work was displayed, and what the true risks to viewers were for exposure. An article even suggested that one of his radioactive pieces may have been installed on the top floor of the Kunsthalle Bern where it remained up until at least 2016, though I could not verify this.

** Prussian blue a dark blue pigment produced by the oxidation of ferrous ferrocyanide salts that can be used as an antidote for certain kinds of poisoning.

***Hyperobjects are objects that humans have the capacity to affect or create, that are larger or longer lasting than the human mind has the capacity to comprehend. Examples of this are global warming, or toxic human-made chemicals created in an instant, yet persisting for tens of thousands of years.