From the moment Homo habilis first manipulated stone, humankind has been defined by its use of materials. Of the seven Ages, four were metal: Bronze, Iron, Steel and Aluminum. Metals are as malleable as putty in their molten state, similes for hardness when cool (“strong as steel,” “iron resolve,” “adamantine will,” etc.). Their strength, durability and conductivity make them so valuable that they have naturally manifested a largely-unregulated global recycling market with astonishingly high rates of capture. The same goes for art making. In bronze casting, it’s a given that one’s cast-offs and scraps will be gathered as fodder for new sculpture, perhaps having been sourced from another sculpture’s scrap to begin with. Whether a rust-chewed truck rotting in a farmer’s field, or a dusty beer can collection in a shed, there is a buyer to be found, and money to be made. 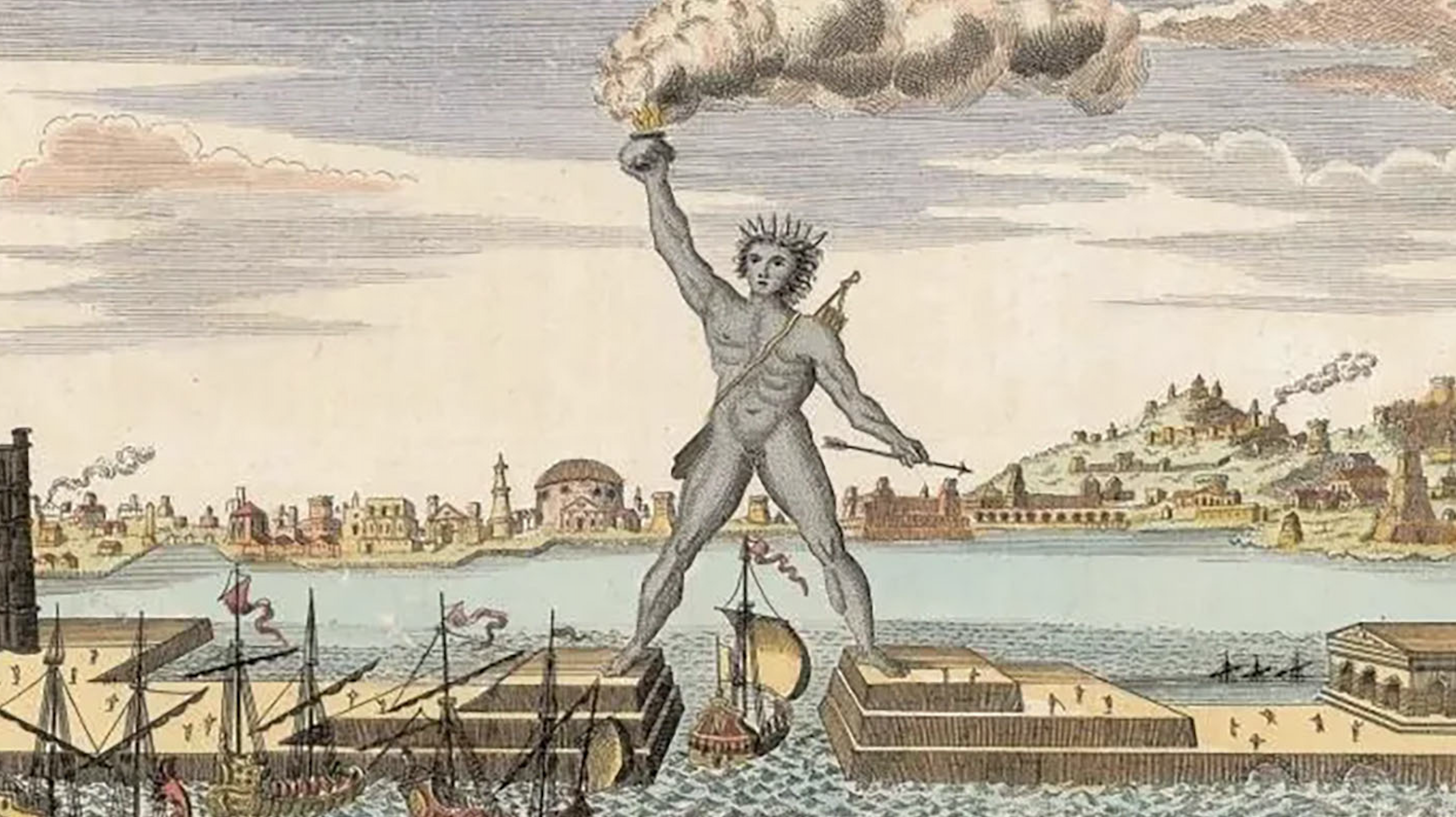 In fact, because of its resale value, many historical bronzes have been lost to scrapping. Take the Colossus of Rhodes, one of the Seven Wonders of the Ancient World. This 110-foot-tall bronze of the sun god Helios built in the third century B.C. stood for 56 years before toppling in an earthquake, and being sold (centuries later) for scrap. When not being laid to rubble through the unfortunate combination of scale and natural forces, bronze sculpture holds its own among the top candidates for the longest-lasting remains of human culture. Some speculate it could last indefinitely, if protected from corrosion. Many artists avoid bronze, however, on account of its association with bad public sculpture. It is used worldwide in municipal and metropolitan public spaces to monumentalize (often problematic) historical figures, and as such is instantly recognizable as an art material ‘for the people’ (even polishable with the acid of the human touch). Its profusion is easy to explain: extremely high weather tolerance and nearly non-existent maintenance make it an easy sell to civic arts commissions, whether they are art experts or (more often) not. As Mel Chin offered a presentation at Rotterdam’s Kunstinstituut Melly (formerly known as Witte de With), the undeniable accessibility of bronze constitutes a draw, not a drawback. It is approachable and communal. 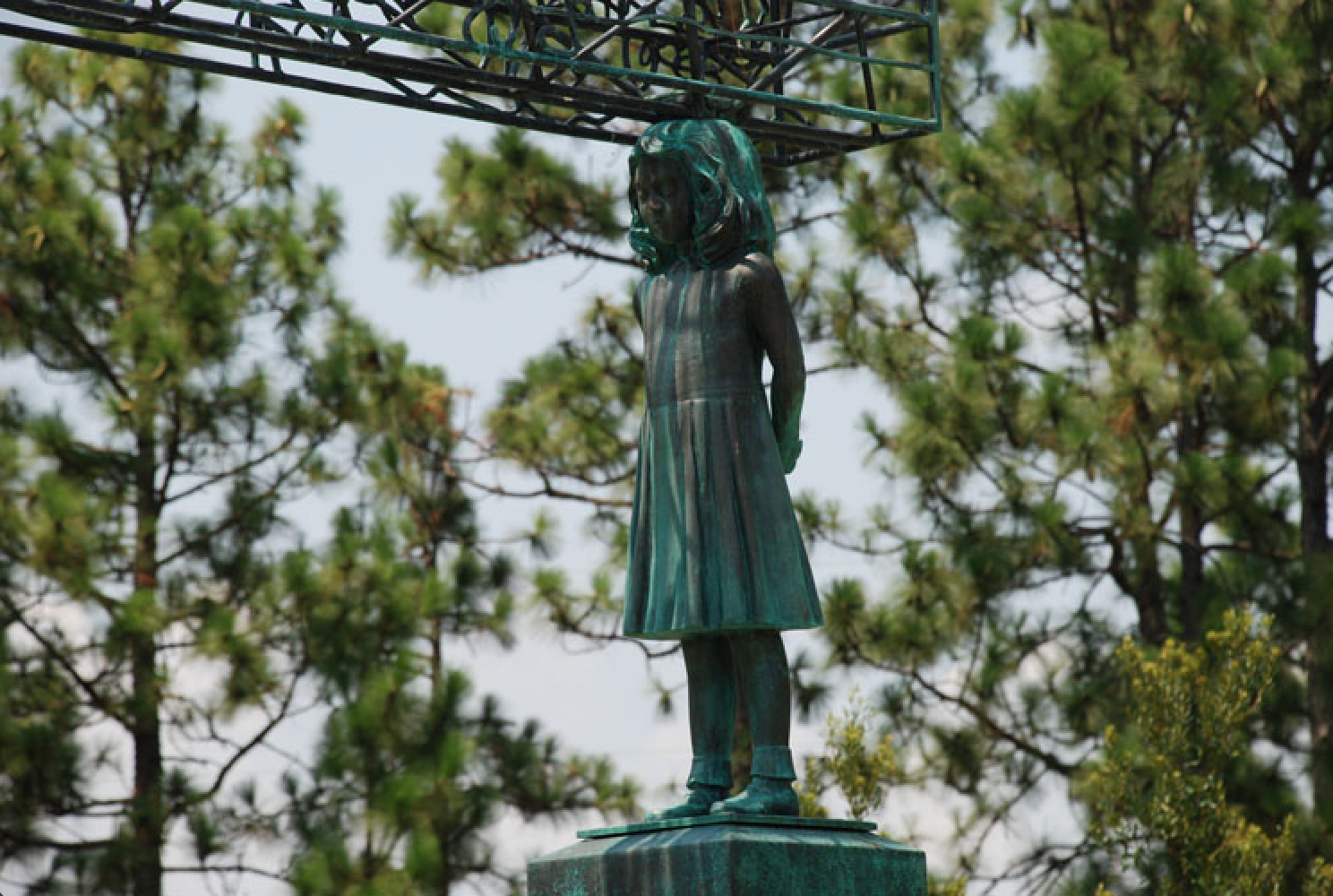 Mel Chin, “The Structure of Things Given and Held”, bronze (2009). Installed at the Cameron Art Museum, Wilmington, NC (close up).

Infinitely-recyclable shapeshifter that it is, metal can act as a signifier for the stories it carries. As long as humans have been using steel, they have been casting and shaping it for new purposes (often symbolic). “Beat your plowshares into swords, and your pruning-hooks into spears,” goes the famous biblical call-to-arms (Joel 3:10). In a sculptural project of antithetical purpose, artist Lin Evola has been creating so-called “Peace Angels” from decommissioned nuclear missiles, guns, and weapons of war. Though somewhat unfortunate in their aesthetic and formal quality, the symbolic potency of Eyola’s material is undeniable. 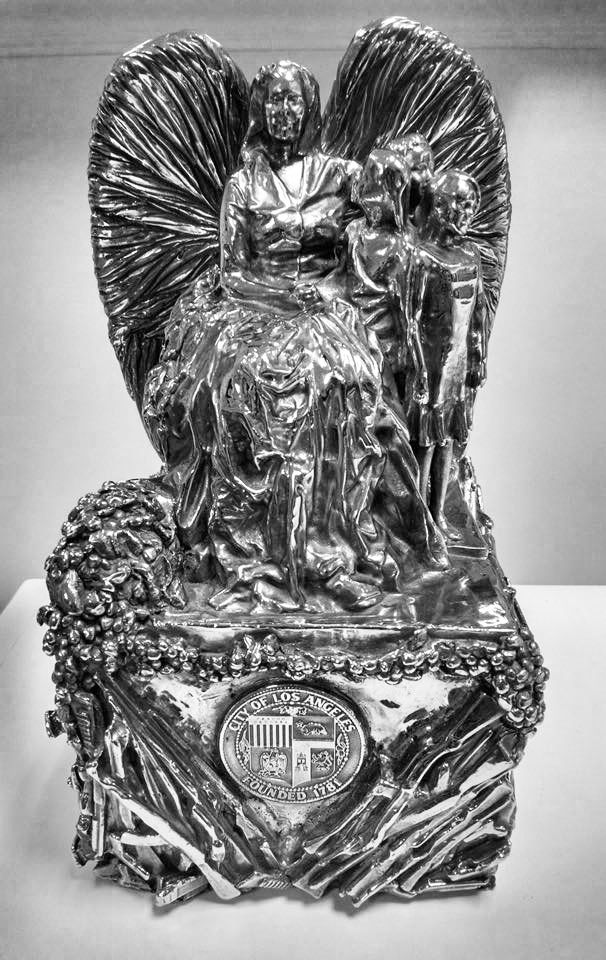 A similar gesture more in keeping with my personal tastes can be found in Russell Gordon’s “Copper Ingot and Document, 2013–14.” Gordon produced this series of fourteen sculptures with approximately 25,000 Canadian pennies per multiple, melted down to the dimensions of standard trading bars for precious metals (with permission from the Canadian Ministry of Finance). Funnily enough, the pennies were much more valuable in this form than as a currency, prior to their decommissioning in 2012 (indeed, the reason for said decommissioning). Gordon keeps a trade calculation which updates copper’s current market valuation every 5-20 minutes, tracking the literal material appreciation of the work (ranging from 203.97-245.95% at the time of this writing). This valuation is based on physical material flows, geologic abundance and scarcity, and the production and transportation of an earth resource – in many ways diametrically opposed to the speculative digital logic of the NFT. In the auto-wrecking industry, the average American car is shredded with $1.65USD inside. Meanwhile in China, recyclers have created special Christmas light shredders that use water to float and sort materials of different weights in order to extract the valuable copper within. 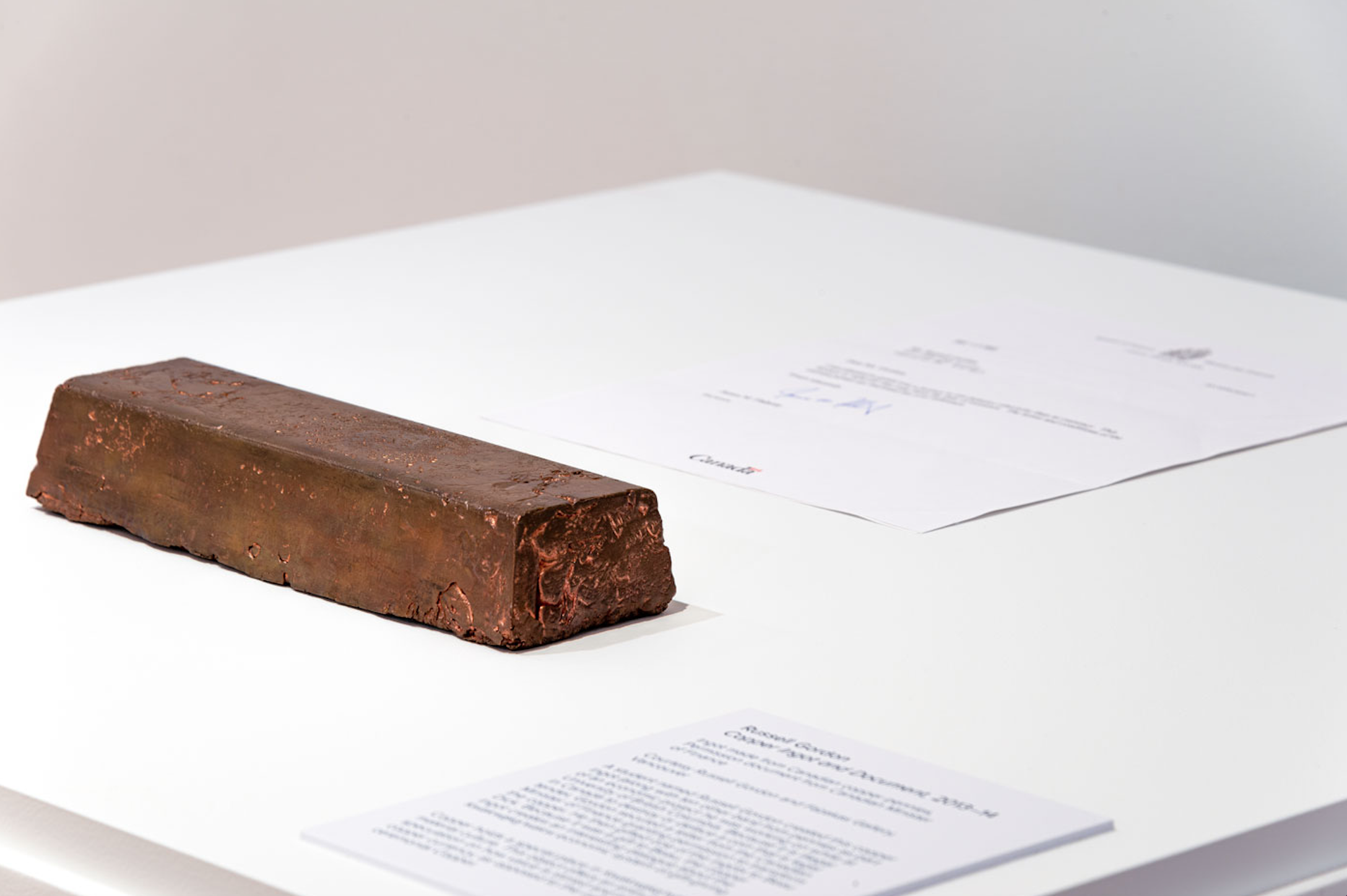 This sort of pioneering scrap behaviour is unsurprising when you consider the sheer resources required to extract metal from the ground. Aluminium is produced from bauxites, a brick-red substance mined from the tropical region of just five countries: Guinea, Brazil, Jamaica, Australia and India. The aluminium oxide is extracted from bauxite using caustic soda, high temperatures, and water. It takes about 4-5 *tonnes of bauxite to produce 2 tonnes of alumina, from which about 1 tonne of aluminium can be made, while aluminium cans can be recycled infinitely using 95% less energy than required to produce them from ore. I am reminded of Simon Starling’s eloquent, gut-wrenching work: “One Ton, II (Five handmade platinum/palladium prints of the Anglo American Platinum Corporation Mine at Potgieterus, South Africa, produced using as many platinum group metal salts as can be produced from one ton of ore).” As the title does well to describe, these photographs bring together the mine as an image, the physical material mined there, and the absence of the ore left behind as a waste product. The bas-relief of the quarry in the earth is mirrored in the negative space left by the literal ton of missing ore that facilitated the presence of the platinum and palladium suspended in Starling’s prints. I think of this piece as a contemporary “One and Three Chairs.” 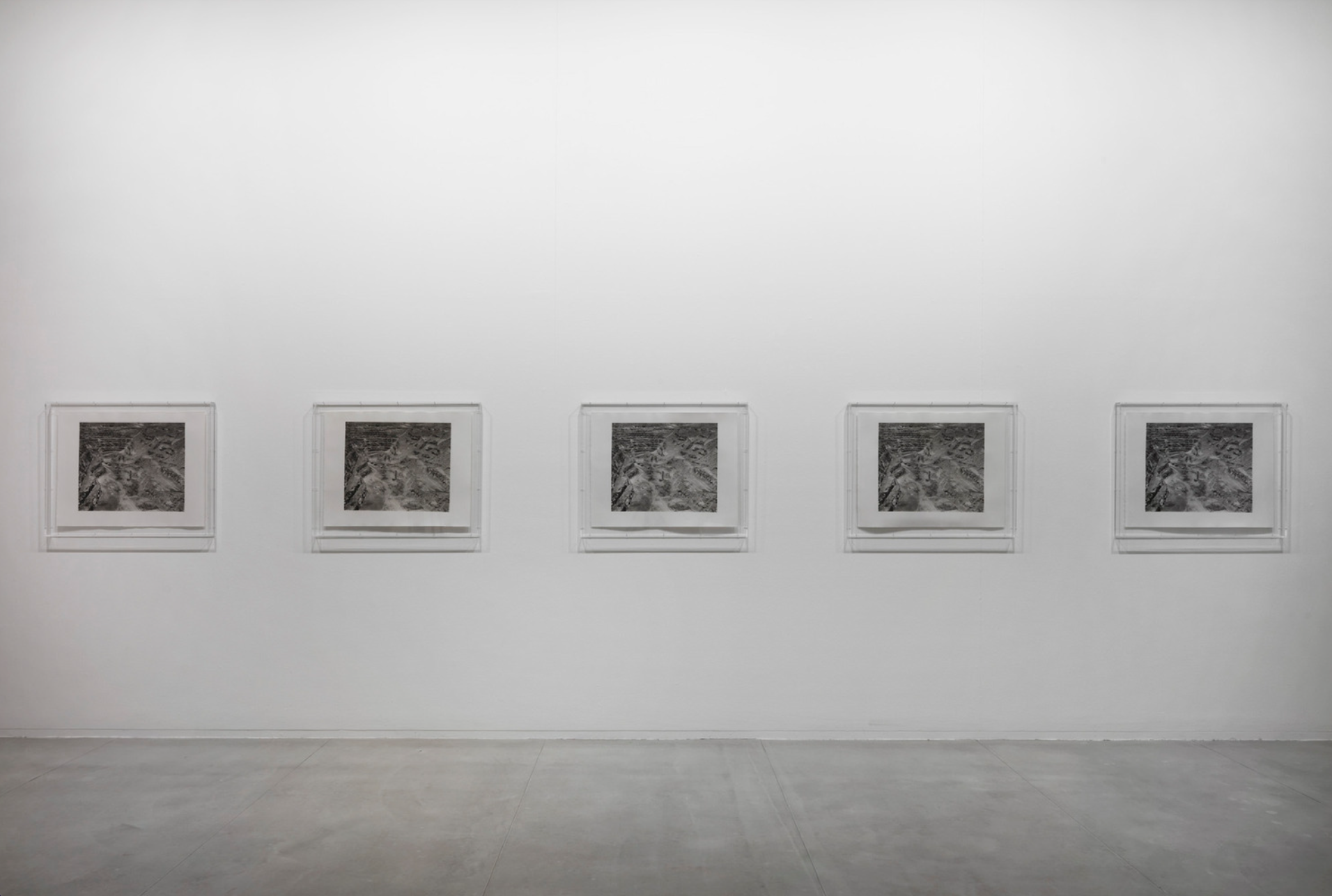 When thinking of metal in twentieth-century art I think of Donald Judd’s pristine aluminum boxes, which as **fibre artist Karen Reimer once astutely remarked, was successful not in removing the hand, but in removing the artist’s hand. I think of Richard Serra’s “Hand Catching Lead” (1968), and the porous vulnerability of the tough, working-class skin clutching the toxic metal, which likes to migrate to the bones and the brain. I think of Carl Andre’s various metal plates, often scaled phenomenologically in reference the human body (as so much Minimalism was) and meant to be walked on, while I meditate on the missing body of Ana Mendieta, never and always present, leaving a stronger, softer, harder, and longer impression. Materials like metal maintain value outside of their stories, but those stories are embedded within their material makeup, even when long forgotten. To quote Alan Kaprow: “one cannot emphasize enough the clear-headed decisiveness of those who choose to employ as media tissue paper, the un-programmed visitor, or growing grass.” Metal is a foil for human history, and won’t stop reflecting us until we aren’t around to shape it anymore.

**Also: I spell like a Canadian and I’m not going to stop. 😀