The Water’s Mirror of the Sky: “All In” at The Riverside Art Center

I’m watching a fly float over the clouds in the water’s mirror of the sky. It skitters, flutters and floats–leaving behind a turbulent wake that appears in my imagination as an erratic line, proofing the fly’s movements through space. The trace loops through the three dimensions of the surface. As I approach the water, the lines shorten in the distance,(we know the rules of perspective)and the view becomes topographical. Im now standing over the water–looking down to see the fly. Time is illustrated in the dissipating image of the oldest movements. As the fly plunges closer to the eye, its jet wash hurls swinging vortices in fattened, pressure soaked movements. I see the speed of the fly quicken as its impression gains purpose. The history of the fly becomes an image–a propeller–under which an amorphous yellow, seeps through like a memory of its former self, struggling to evolve. The water’s mirror seizes this propeller at the concrescence of meaning. The lines become the language of the apparatus. The metaphor dissolves. My fly disappears. It is just a painting again–Christopher Smith’s painting, Untitled IM32 in the north gallery at Riverside Art Center. 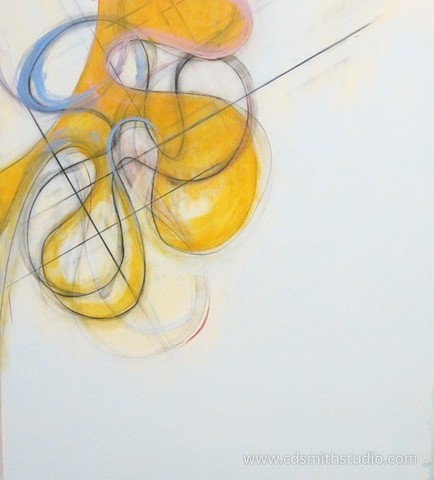 I pull away from the painting in the intimate room in which it is hung–weaving, in a backwards motion, through a crowded opening at this cultural oasis in the obscurity of urban sprawl currently demanding (through persistent quality offerings) our attention and travel. In RAC’s latest offering, All In, curator Karen Azarnia has selected a group of painters who display a range of approaches to abstraction. From the cannon that binds them to the execution that separates them, these artists convey their painterly chops while maintaining a singularity whose description is, admittedly, just my reflection in the water. My ideas. Their images. I try to link them here–I try to create metaphors from visual cues to create meaning. I create meaning to locate my interaction with these images within my own experiential dictionary. I am both limited and liberated by the extents of my exposure.

Creeping into my frame at stage left in my back pedal, are two small paintings by Magalie Guerin. At first glance, I glean my expectations from her work. I calculate immediately that what I am looking at, and about to engage further, is figurative abstraction. I see the anatomical forms that I have come to know and believe I understand of her work. However, I also believe in looking further. I believe in experience as the means of dissolving boundaries built from previous experiences, and I pivot to an about face with the work, intent on discovery. 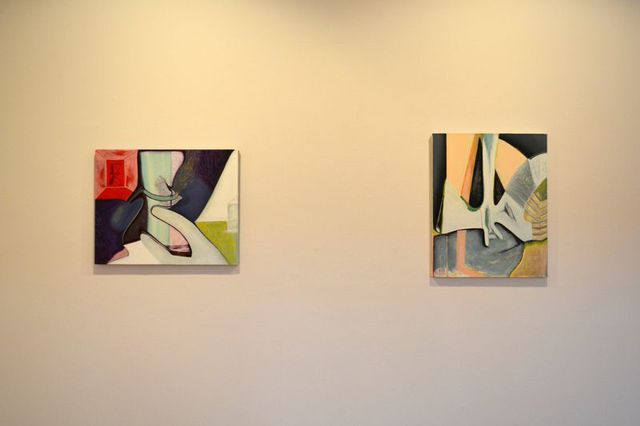 Scanning the paintings, I consider my entry. I consider having entered my reflection in the water by movement through it–I see the ripples as causation rater than effect–as they distance, the image clears. My eyes are directed to a deep space in the upper left corner of the painting Untitled (hat–red room) 2014. In this portion of the image there is, in fact, the painted description of a human profile topped with a hat in front of a red backdrop. The angled lines tunneling to it, suggest the architecture of the title as well as the essence of the total. Herein, I find the strategy for extrapolating from the learned historicity of painted space as a means of creating new visual syntax.

I see Guerin’s visual clues to Matisse’s red studio and to a number of his blue paintings wherein, Matisse forces the viewer to consider color fields as space, utilizing line only sparingly to describe perspective and scale. I see the clues she leaves behind about the figure and its relationship to space. I visualize the discourse Guerin alludes to when I discover what I think she has done with it. Out of the deep corner in the red room, the figure emerges. The painting is made of the figure. It is repeated over and over again. The figure is the space. The space is the figure. The repetition is utilitarian while maintaining enough ambiguity to force the viewer to work for the strategy.

The painting that commands this room looms large over my left shoulder as I circle around to it. John Phillips’ Untitled 2014, is a slick veteran painting that showcases the artist’s unflinching commitment to abstraction. It looks like bubble gum and cotton candy–the colors of nurseries and lawn storks. It is atmospheric while sharp. It is rigid and loose. It equally distributes the wealth throughout the gridded structure that maintains its form. Here the metaphors escape me and I’m left to decipher an analytic code–a code writ large in the history of abstract painting. The oval form that Phillips deploys isn’t a reference to his massive record collection. They aren’t planetary. They aren’t a representation of anything. They are a serviceable geometric form that Phillips has utilized throughout his career to organize space. 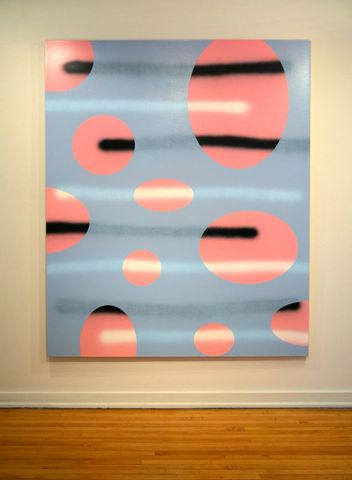 My eyes make contact with the edges of the painting, where Phillips seems to be particularly deft. He encapsulates the expanse by maintaining his boundaries, pushing objects into a deeper field. The bars breaking up the painting horizontally, pulsate in and out of space. This undulating motion is dictated by where a bar meets an oval. The ovals assume the surface level and thus, control the space. Through a manipulation of perceived space that is his own, Phillips stamps another canvas with his potent investigations.

As I segue to the south gallery, I meet Melody Saraniti’s work in a narrow walkway between galleries. The path and the crowd draw me into close proximity with the work, forcing an intimate encounter with the materials. It is through this piece, that my own thematic emerges. 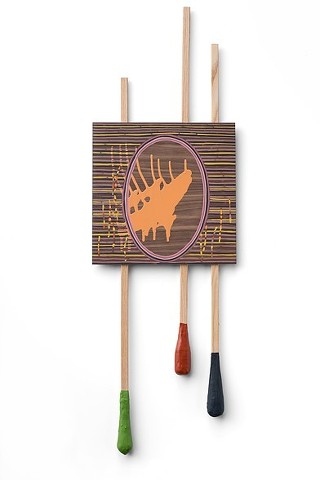 I see Saraniti’s dialogue. I can See what she means. We use this expression often, whether looking at an image or not: “I can see what you mean.” It conveys the sense of dialogue. I became fixated on this idea, and how it resonated throughout the exhibition. In Hexylene 2015, Saraniti draws from the well of modernist vernacular to assume the position of the viewer. She amplifies this vocabulary by making three dimensional models of painting moves, such as the drip, the smudge, or the straight from the tube application. Within this framework, she views her own process and materials.

A similar trajectory can be found in the contributions from Diana Gabriel and Alexander Herzog, wherein painting grammar and language systems guide the viewer through their work. In Herzog’s piece, Graft 1 2015, I was convinced that I was reading text in the cascading block forms in the foreground of the painting. I could see what he meant. I could see the connections he was making to visual language and the syntactical arrangement of painting gestures. Herzog seems to commit to the lexicon of language itself–to breed this existing familiarity within the act of seeing. 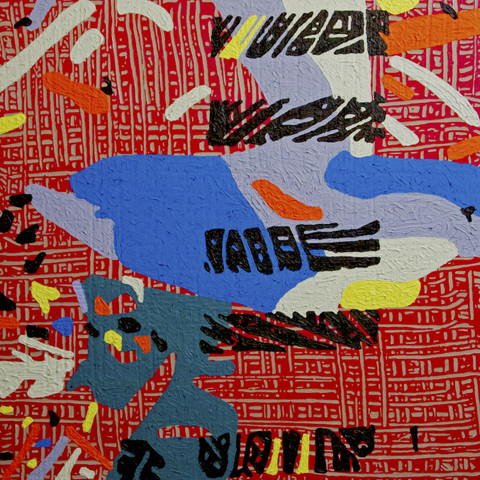 The behemoth of the show, Scott Stacks, Untitled 2013, is on its own plane–working with perspective one ardent line at a time. His persistence appears honest and painstakingly carried out. The matrix of lines projects a techno-narrative slant wherein I find yet another form of language manifested in paint.

At the exit, I take one last glance. I return to what I see. In this exhibition, I see more than seven different styles of abstract painting. I see the history of abstraction and the nature of its survival over time. I am reminded of a Bruce Lee quote:  “Notice that the stiffest tree is the most easily cracked, while the bamboo or willow survives by bending with the wind.”  The parameters that have bound various historical art movements were also the factors in their inevitable deconstruction. Abstraction has survived time because it mutates in the eye of the receiver. It becomes them. It becomes their reflection in the water.