“Ahoy down there” I yelled,  acting out a drama I had seen before and would see forever–over and over. Again and again.

I thought I was calling down to her from the top of a gigantic sand dune. From the peak of the tallest mountain. From the apex of the world. Only she could hear me. She would call up to me in response, “ahoy up there.” The image of her I create now, for that memory, is one from a picture I have of another time. It is the only picture of her in my possession–one I have carried with me. From home to home. Place to place. Year after year. She was undoubtedly younger on the beach–as was I.  In the picture she is wearing a matching pink. Pale. Soft. Sheer. Pants, of course, I don’t think I ever saw my grandmother’s legs. Her top fit like a sweatshirt, though it was short-sleeved. It was puffy like, with some sort of white pattern embroidered in the middle–likely flowers. She has a full head of curly hair–hints of a dirty blonde tinting a grey field. Her hands are folded atop a stack of importance. At the bottom of the pile is her purse–a black leather clutch with a gold clasp. Then a little pouch that housed her Pal Mal cigarettes and lighter. The lighter facing up for easy access and to avoid an uneven surface had it been facing down. Her hands complete the stack. Smoking hand on top. A burning Pal Mal protruding from her fingers. In the photo she is still. She is stoic. No smile. She didn’t know how to smile for a photograph. In the memory she is alive. She is present. She smiles. I’m satisfied with this being all I have, because it is somehow everything she was.

The way we see is historical. Cultural. Social. The way we see is created by our experiences and over time. It is perpetually evolving. The way we recall our memory of these experiences is also a product of this same evolution–we associate memories with images. Images that are not necessarily adept at defining the memory, but rather serve as a stand in for the lost pictures of experience. When a memory is continually visited, the images become unusually vivid, as if actually visible. They become our understanding of our world and our time in it.

In Claire Sherman’s most recent exhibition at Kavi Gupta Gallery in Chicago, I saw this kaleidoscopic vision of the way one sees conflated with the imaginative experience of being present in one’s memory. On these canvases, Sherman seems to be at once a native of the places depicted–an observation of the self within the physical act of making a painting–and a stranger trying to find the natural world at work in her own psyche. 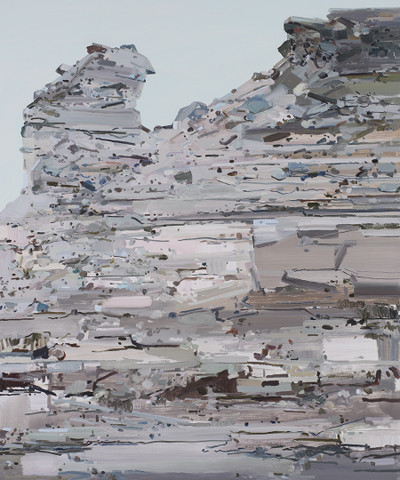 The main gallery is draped in predominately white canvases that wrap the room like stone monoliths–their energy–creating a circular movement in a rectangular room. For a paint enthusiast, this room is almost overwhelming. One painting would be plenty to satisfy the most robust appetites–the rest are a gratuitous banquet for the glutton. These paintings are top notch–a fine example of an artist hitting their stride–finding herself in her work.

Funeral Mountain is a real place. A real mountain. It has histories–some of which, we cannot know from any written words or photographs. The name of this range, that makes the eastern border of Death Valley at the California/Nevada boundary, is born in myth. Lumberjack folklore. Casket-headed beasts with wobbly legs that travel in herds and walk in procession is to credit for the Funeral portion of its title. In myth, there is often truth. The climate is challenging here, and no doubt, crossing death valley may have ended with many funerals in the mountains beyond. It is arid. It is hot. It is unforgiving.

This climate is felt in the main gallery. From afar, the paintings appear to be dry flat grays with the jagged edges of rocks. Powdery whites and chalky pastels. The room feels bare and stark. Naturally lit by a hot sun bearing down through a cloudless afternoon sky. It is this picture and this feeling of place, that I carry with me through the exhibition. 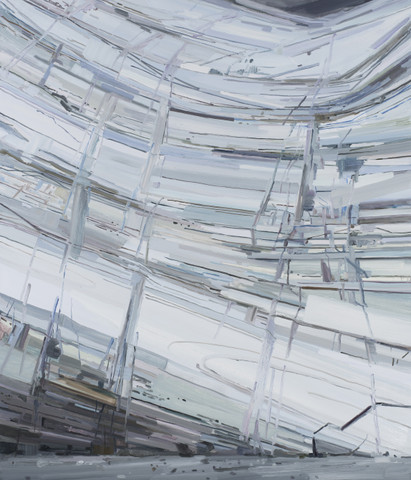 As I approach the first painting that is beaconing me, Rock Wall 2015, I realize how important this action is to understanding this exhibition. The in and out. The perspectival changes. The idea of making paintings versus making images. The threshold between representation and abstraction is somewhere in the middle of this room. The closer you are to these works, the closer you are to entering a smaller world of direct experience, indirectly known through the symbolic language of  painting.

Rock Wall appears, from a distance, to be exactly what the title suggests, but it has a vortical flow insisting the viewer nearer. There is a lot of impact in this painting–both small and large– generously buttered onto the canvas to depict the striations and gradients of stone. Working wet paint into wet paint, Sherman achieves the deep cracks and fissures that penetrate the stone of the mountains by penetrating the wall of paint she has amassed on the surface.  I get the idea that Sherman is using her photographs of these spaces she visits as a way of situating her memory of her own experience, but uses the paint to feel the place again. And again. And again. These paintings in the main room place the artist outside looking in-an alien’s approach to an unknown landscape. 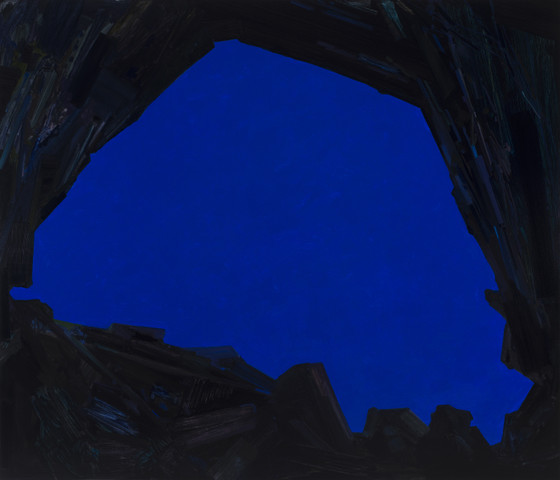 In the adjacent smaller gallery, two large paintings act as the antithesis to its counterparts in the main room. These works place the artist inside looking out–emerging from womblike darknesses into a world of painted light. In, Cave and Sky 2015, an electric blue commands the space of the physical room and flattens the surface of the painting at a distance. Again, a movement toward the painting reveals more. Manic brushwork in the dark, mixed purples, and reds make the black of the cave walls. The blue covers you. The painting unfolds by enveloping you–you feel the darkness on your sides as you stand at center covered in sky. It is sublime. 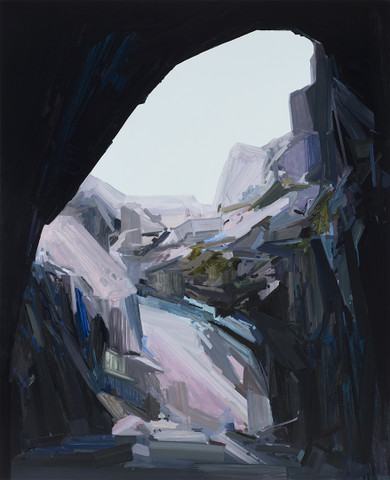 The history of landscape painting is vast. The sublime in nature is an abyss of discourse concerning abstract ideas, easily congruent with most attachments. To read a bare list of names, theories, and ideas of lore is to become aware of a widely distributed and loosely tied family resemblance of contingent traits that would merely undercut this body of work. We can always find the history of constructed things, if thats where we look to define something new. To me, this work is about encountering oneself in an eidetic place–a place that exists between one’s ears, and made real by the act of painting. It is about the power of memory to fill in the holes that inevitably crater our reality. Sherman finds just enough memory to reproduce a feeling remembered. That dialogue continues over and over–from paint to place and back again.