Suddenly, and with little warning, the sun came out. After months of winter grey, the yellows pierced the clouds, warming surfaces in its reach. I was lost in a hardwood puddle of twilight orange on the gleaming floors at Corbett vs Dempsey when it came to me. The sunset squeezed through the blinds and the small rectangular allowance at the base of the window, drawing highlights of its manufactured geometry across the deck of the gallery. It was, as Agnes Martin describes, a “moment of perfection.” To her, a moment of perfection occurs at the moment of recognizing its existence. Perfection does not happen in the eyes. We do not stumble upon it. It happens in the mind–its always there–waiting for you to recognize it.

In this moment, it was apparent to me that somehow light is perfect. It is a blanket in the cold. A guide in the dark. A beacon in the void. We attempt to reflect, refract, and reproduce light to our affection. It is a shared physical reality, only partially explainable with measurement. More importantly, light is a force of nature that we have created metaphors, myths, and legends for, in an attempt to describe its unnameable qualities–its attributes that make it inherently perfect. Much like the light, the echo claims similar traits. It is a phenomena of our tangible universe that, beyond its quantifications and practical applications, we are left with the residue of myth–an intangible substance that occupies real space in our minds. 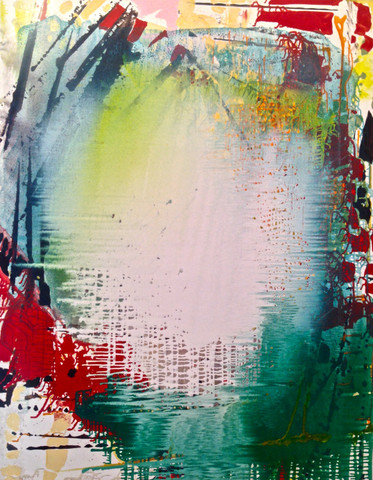 In her most recent exhibition at Corbett vs. Dempsey, Jackie Saccoccio delivers “Echo”–a series of abstract portraits whose titles steep them in populated discourses, that are merely auxiliaries in arriving at a singular and psychological entanglement between the artist, the viewer, and the work.

When I try to imagine my last experience of an echo, the place I imagine is not likely to be the actual place of observation. Instead, I reproduce a space in my mind in which I know an echo would exist. A canyon. A vast expanse. Mountains. Water. It is idealized. It is perfect. I recall the dynamic quality of the experience–I remember how special of an anomaly an echo is, and I repeat an indistinct noise over and over to hear myself projecting into the infinite space where echoes occur. A similar facade monopolizes my mind when I think of a portrait. The image I concoct is one built from history–a resonance of the renaissance. I expect the form to be central and I expect it to be human. I expect the figure to be the display, as well as the model from which an idea is propagated.

While the infrastructure of renaissance portraiture may exist in Saccoccio’s paintings, the centralized figure remains only as the most distant resounding of an echo. As the portraits recede into the deep spaces Saccoccio creates through perspectival maneuvers and layers of controlled spills, new possibilities emerge. 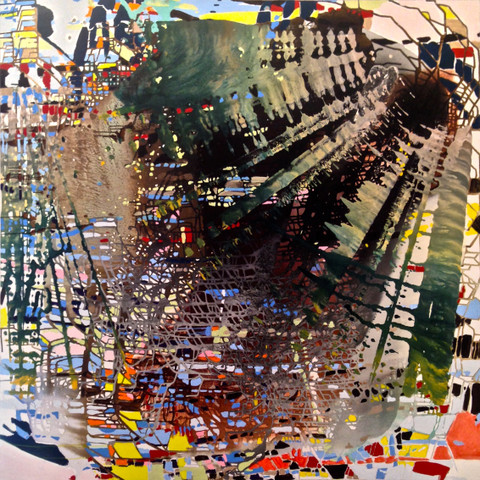 In Square in the Hole, the artist leaves little trace to the portrait. While a figure might be unearthed from the light wash of brown ground hovering in the depths of the painting, my eyes are drawn into the green jet streams blasting into the corner at top right, and the more subtle version of itself that brings the eye in the opposite direction on the other side of the painting. Those finishing moves–executed with some sort of straight edge or squeegee, are the major forces in this piece. These lines do more of the heavy lifting than any other part of the painting. They are the conceptual foundation of the title–directing the eyes to the round hole that the title suggests the square painting is trying to fit into, as well as a hint into the density of these works as a whole.

To me, Square in the Hole, was the blueprint for the exhibition. It alluded to the role of the titles within the physical and conceptual spaces manifesting on the canvases. What I initially saw as a physical engagement with the various properties of paint–getting lost in tracing each step in the process and spinning them around in my mind as I followed the trajectory of the curated spills–I could now understand as a guided experience. The artist knew where I would go with my eyes and my mind, and the painting is designed this way. The titles simply gave me the necessary nudge into this read of the work.

To me, these paintings are simultaneous self-portraits–as maker, viewer and sitter. I could see the artist stepping in and out of these roles to make aesthetic decisions–wrestling with these large objects in the studio while grappling with a psychological understanding of what an abstract image is and how it functions within a world of language systems that play vital roles in projecting this knowledge. 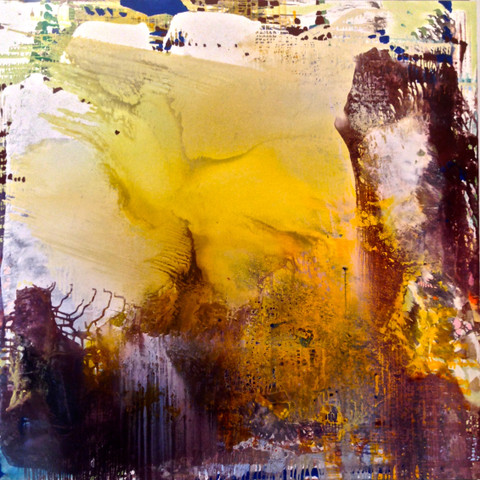 The more time I spent with this work, the more my experience felt like a dialogue, rather than an individually perceived moment. I felt as if I was being told–through the images–that the way I think about and process an image is echoing throughout the paintings as a precondition of the language systems that govern our perceptions.

I left the exhibition thinking about the residue of myth–the power of language. I left thinking that my experiences of physical space and thus, images, are just as crucially dictated by language as they are by the primary areas of physics–the areas that would explain, with language and diagrams to boot, how an echo works.

If the echo is a metaphor for the psychology of understanding language systems–it is a perfect one. The further you track it, the more distant it becomes.