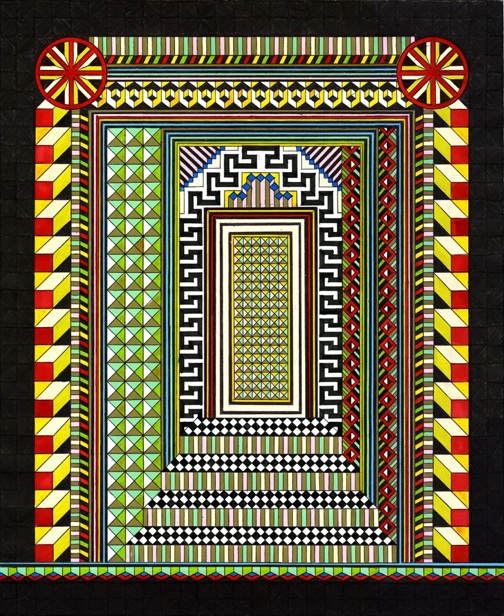 On view currently at Chicago’s Thomas Robertello Gallery are 15 pen, ink, and gouache drawings on paper by local artist, illustrator, and author of theÂ Gaylord Phoenix volume of comics, Edie Fake. Titled ‘Memory Palaces,’ the exhibition is a stunning showcase of Fake’s exceptional, and exceptionally idiosyncratic, formal skills in composition, pattern-design, and color, as well as a moving meditation on loss. Specifically, Fake pays tribute to the passing of five friends, colleagues, activists, and artists (Mark Aguhar, Nick Djandji, Dara Greenwald, Flo McGarrell, and Dylan Williams) in a series of drawings titled Gateway, and to ten real or imagined spaces of queer congregation no longer, or never, existent. 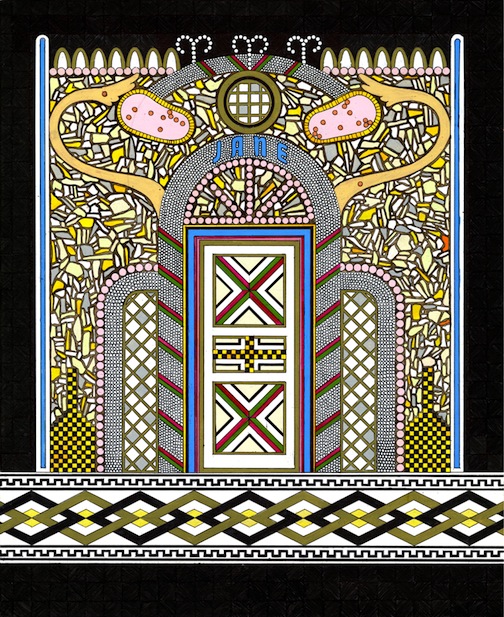 Put simply: depicted are places Fake, or the rest of us, may never go. They are hopeful spaces vividly imagined by those living in a contemporary urban environment largely ravaged and rid of countercultural nightlife by neoliberal vice and zoning laws, class-targeted antidrug policies, and corporate gentrification efforts throughout the late 20th century. As such, the collection of building facades Fake depicts – described as a neighborhood – can only be psychically located between utopian fantasy and interpretive research. Doing so foregrounds how the imagination and it’s shadow, desire, propels individual or collective searches for heritage, lineage, and belonging. What might be made possible for someone whose very personhood and politics teeters on the brink of unviability by the realization that, yes, La Mere Vipere (a burned down gay/punk venue in the now-gentrified Boystown), Killer Dyke (a radical lesbian periodical), and JANE (a clandestine feminist-led abortion service) did, indeed, exist here in the 1970s? Comprehension of these disappeared, criminalized spaces and services entails not simply an intellectual recognition, but something much more sensorial and perhaps even spiritual when translated through the prismatic hallucinations offered by Fake. 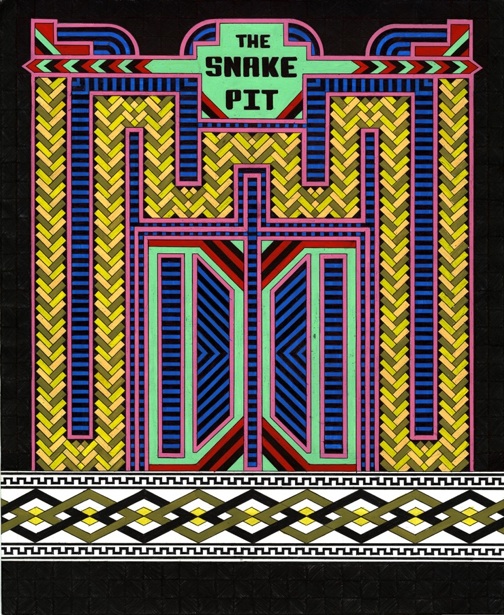 The flatness of the paper Fake has drawn upon is only a format, as his palette of offbeat hyper-colors and remarkable geometric drawing skills translates a deeper, pulsating dimensionality, like the embedded optic phenomena of a Magic Eye poster and a horror vacui painting. A handful of the places recreated here include dance venues, sex-clubs, and art spaces, all of which Fake has foregone a faithful architectural re-approximation of in favor of getting at something much more enigmatic – the mind-altering life practices they facilitated. Representing nightlife from psychedelia through disco and punk, up to rave, Fake renders his spaces with the fluorescent sensibilities and colors of escape developed via dance-floors and acid-trips. Neon hues that should clash, but somehow don’t, cohere in vibrant mosaic facades Fake has lent to 80s voguing-hub Club LaRay and former host of 70s gay anarchy nights The Snake Pit. Seeming inspired by the hypnotic, transportive potential of repetition and detail in geometric art, Fake’s designs are infused with a mystical content in the style of Islamic tile work or Huichol yarn and bead art. 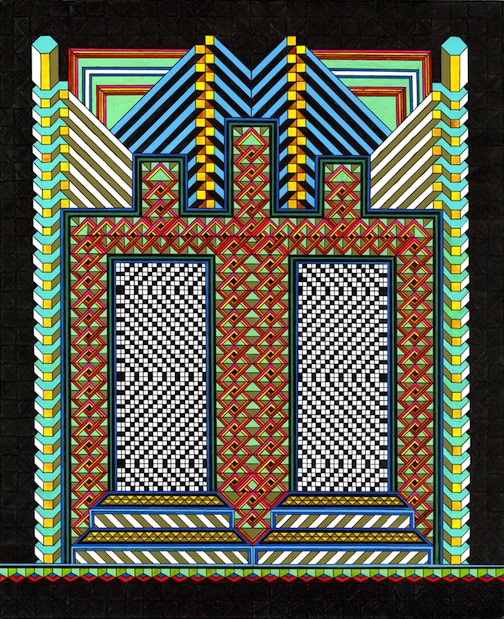 The evocation of non-Western, nondenominational, and anti-representational spiritual aesthetics acquires political significance upon realization of for whom Fake has drawn a Gateway. Fake has imagined entryways into the hereafter markedly more colorful, robust, lavish, and peculiar than the pearly ivory luster of Judeo-Christian concepts of the afterlife. Those mourned are imagined as entering a kaleidoscopic, palatial elsewhere, rightly undoing inherited notions of heaven too tidy, too conservatively patriarchal, for housing the spirit of trans-queer-feminist artist of color Mark Aguhar, the anti-racist feminist dance parties of Dara Greenwald, or the critically outsider sensibilities of punk/metal-comic pioneer Dylan Williams.

It is here where Fake’s project best comes into full relief; it is only through the physical manifestation of improbable psychic longing that another world becomes possible, knowable, inhabitable. After hours, off the books, and after life; Fake honors such phenomena, and those residing there, with an informed, aspirational intensity apparent in the meticulous, strange, gorgeous labor of his drawing. 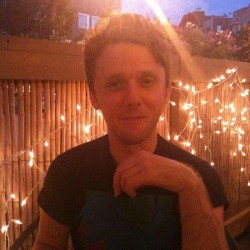 Danny Orendorff
Danny Orendorff is an independent curator, writer, researcher, and activist currently living in Chicago, IL.Much of his work and research has revolved around issues of non-normativity, queerness, feminism, and the contemporary class-politics of experimental, craft, and Do-It-Yourself (DIY) cultural production.