It is easy to conceptualize of something incorrectly and not even realize it until faced with the reality. This is what happened to me last week when I was lucky enough to see the Maurizio Cattelan exhibition All at the The Guggenheim just days before it closed. Iâ€™d read a bit about this show, which is all of Cattelanâ€™s tangible work hung (or perhaps strung-up) in the atrium of the museum. Considering what Iâ€™d read, I was thinking of this as a swan song of a retrospective, but the reality is that All functions as an exciting, unified single piece.

A few individual sculptures stood out, not just to me, but the hundreds of other viewers who were there with me. Possibly it was the adrenaline rush 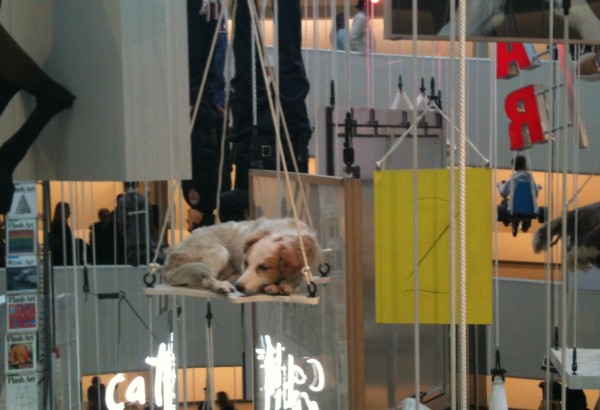 of staring death in the face, or even the perverse thrill of eluding the reaper, because by far the works that drew the most attention were the taxidermies. Squirrel, horse, cow, donkey, rabbit, pigeons (lots and lots of pigeons), and quite a few dogs. The first dog I came across startled me. So lifelike, yet obviously dead. Hanging from the ceiling, there is no way to mistake it for a living dog as might happen in previous gallery installations. As I stood looking down on it, trying to overcome the ick-factor, people passed by, stopped, and then talked fondly about their own dogs both past and present. Instead of reminding people of the lurking nature of death, Cattelanâ€™s dogs reminded people of something they loved, perhaps even evoking life. (Pictured: Stone Dead, 1997)

Lingering in the middle of the mobile is a large, black granite tombstone, that references a wartime memorial. The catalog likens Untitled (1999) to Maya Linâ€™s memorial for those killed in The Vietnam War, but to me it echoes the memorial for The Great War that stands in front of City Hall in the town where I grew up. I expected to see names of soldiers engraved, but instead there is a list of all of the matches in which the English national football team was defeated. I have no idea what Cattelan is attempting to provoke from his viewer with this, but I immediately thought, These are menâ€™s things. War. Football. Sometimes they are even treated as equals, but their losses, they are not equal. Both war and football delineate a place free of women, though sometimes we are allowed to trespass. Men’s conflicts. Men’s defeats. 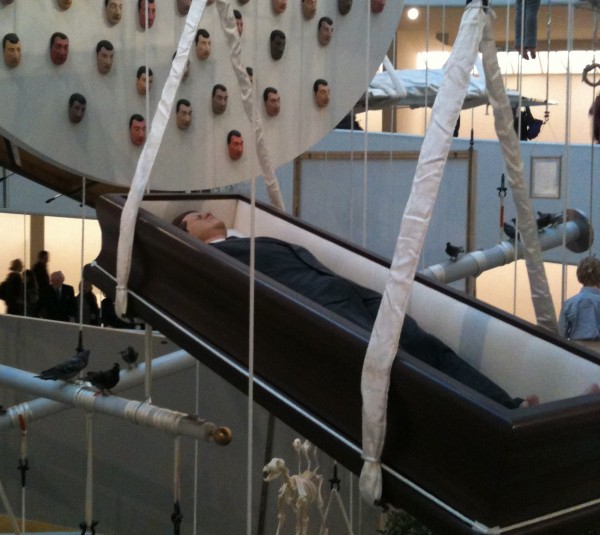 Near to the bottom of the massive installation hangs a casket. Although I could see the casket from nearly every vantage point, what I couldnâ€™t see was its resident. When I finally made my way down, there was a crowd gathered â€˜round. The security guard stepped aside and took me by the elbow to get me a better spot, which Iâ€™ve never had happen before. There in the casket lay Kennedy, looking as perfect as if he had never been shot. Put simply, it was strange to see Kennedy there. I had to ask, whose loss was this? Kennedyâ€™s? The nationâ€™s? Now was made in 2004, but I wondered if Cattelan could see into our future eight years later. Here we are as a nation fetishizing this moment in history, arguably, one of our nationâ€™s most devastating moments. But unlike today, it was a moment that was simple. Grief is simple.

For those who couldnâ€™t make it to the show, The Guggenheim website has much to offer. There is a great time-lapse video of the installation, which is as laborious as any I can imagine. There is a reprint of the article from the brochure, by Nancy Spector. If youâ€™re inclined, an â€œinteractive, multi-platform appâ€ for 4.99. Still, after shelling out for admission and fifty bucks on the catalog, somehow another five seemed steep. It looks great, though, with John Waters hucking it. Call me old fashioned, but when I want to re-experience an exhibition, I turn to the catalog for that.

The catalog for All requires special mention. This is written by Nancy Spector, Chief Curator. It is effectively a catalogue raisonnÃ©, but I wouldnâ€™t count my chickens before theyâ€™re hatched in that regard. The book itself is lovely, and looks like an old encyclopedia volume. It is worth purchasing, or at least borrowing from the library. However, presenting the works individually does undo the singularness of All, transforming a unified whole back into discrete works. Still, All was a rousing salute to a lifeâ€™s work and the catalog reflects this.

Finally, for a good time, do check out Amanda Browderâ€™s previous Haiku Review of All.