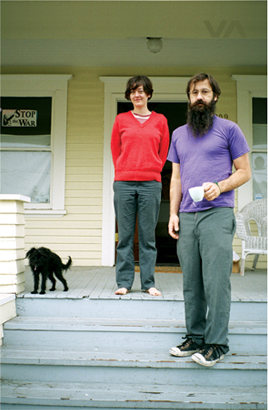 This week: Duncan talks to Chris Johanson and Jo Jackson from Ox-Bow this summer!

“Johanson was born in suburbanÂ San Jose, CaliforniaÂ in 1968. He has no formal training in art, learning some technique by painting skateboards and houses. He moved toÂ San Francisco, California‘sMission DistrictÂ in 1989, where he became a member of the local art community, initially drawing cartoons on lampposts and bathroom walls using blackÂ Sharpies.” from Wikipedia.

Through out the nineties Johanna (aka Jo) Jackson found herself in art school in Maryland and later at SFAI but with her artistic sympathies moving toward aÂ similar “street informed” aesthetic.Â In the lateÂ ninetiesÂ and early “aughts” She and Chris both became associated with the SF Mission Â school along withÂ notablesÂ Barry McGee and Margaret Kilgallen. Both were featureÂ prominentlyÂ in the documentary and publication “Beautiful Losers.” Â In 2004 they bought a home and moved toÂ Portland, Oregon. They now split there time between Portland and LA.