MoMA’s Live Streaming Marina-Cam Invites Everyone To Be Present 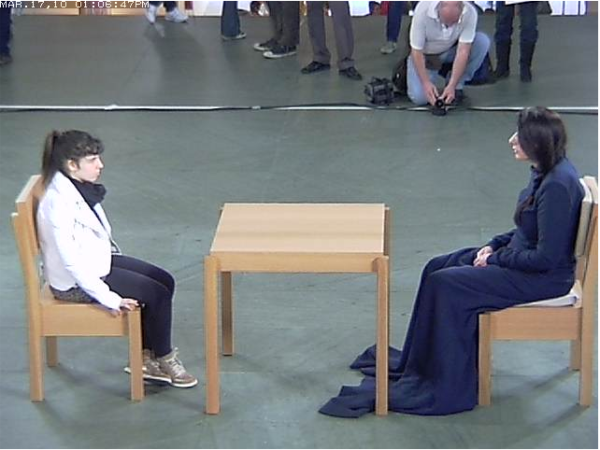 Screen grab from Live-Streaming Video of “The Artist Is Present”

Does the Museum of Modern Art’s live feed of Marina Abramoviç’s performance “The Artist is Present” defeat the purpose of the piece, or enhance it? “The Artist is Present” is the title of both Abramoviç’s retrospective, which opened at MoMA on March 14th, as well as her new live performance, which takes place in MoMA’s Marron Atrium throughout the run of the exhibition.  In her performance, Abramoviç sits on a wooden chair in front of a wooden table. The chair across from her is occupied by different museum visitors, who are invited to take a seat across from the artist and gaze at her while she gazes at them. Visitors are allowed to sit in the chair for as long as they want. (One man stayed for seven hours).  MoMA’s exhibition website notes that the retrospective as a whole endeavors to “transmit the presence of the artist” by including “live re-performances” of Abramoviç’s works by other people, along with this new durational performance by the artist herself.

I couldn’t find any mention of how live streaming the performance fits into the exhibition’s overall attempts to “transmit the artist’s presence,” however. Ideally, of course, viewers will experience Abramoviç’s performance in a more direct fashion, either by sitting across from her or watching from the audience as other people share her gaze.  But the existence of MoMA’s live streaming “marina-cam” (my nickname, not theirs) is downright puzzling. What’s the purpose of streaming a performance–one which purportedly explores what it means to “be present” in this particular historical moment — for the benefit of anonymous internet users who can engage with it only by staring at their computer screens for a few seconds at a time? 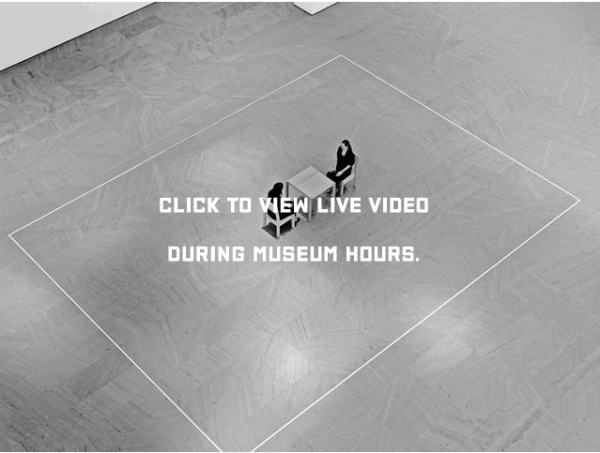 For a work of art that necessitates ‘presence’ in all the multivalent meanings of the term, I find it curious that Abramoviç agreed to the livecam broadcast in the first place. I wish her thoughts on the subject had been included somewhere on MoMA’s website (if they are, I wasn’t able to find them). Although I can certainly see how the presence of audience/viewers standing in a ring around the performance area heightens the sense that this is also a form of spectacle — a fact which adds further layers of complexity to the piece– I can’t quite work out what the Marina-cam adds other than to further amplify the spectacular element via its broadcast to anonymous thousands. On the MoMA/PS1’s staff-written blog Inside/Out, a post written by David Hart, the Museum’s Associate Media Producer of Digital Media, provides a bit of background on the idea:

“when the Marina Abramoviç exhibition was starting to come together,” Hart writes, “the staff in all the departments here struggled with how best to communicate the ideas in the exhibition online – since so much of the point of performance art has to do with being in a location, in a moment in time, live. Honestly, I don’t know much about performance. A line from a funny little video made by a friend came to mind: ‘Here lies the sea captain, many men wondered whether he was crazy or brave.’ I thought this live stream might be more of the former. And I knew that anything that seemed this simple technically would inevitably be more complicated than just turning on a laptop and connecting a webcam.'”

I hope that future posts on MoMA’s blog go into further detail about the conceptual ideas underlying the decision to broadcast Abramoviç’s work in this way, including some sense of the artist’s take on the matter. Right now, the livecam feels more like a gimmick than anything else, not the least because the feed times out after just a few seconds. Viewing it online is anything but an absorbing experience. I can’t imagine anyone watching for more than a minute or two, which makes the Marina-cam little more than an online advertisement for the show itself. Indeed, the Marina-cam seems customized for Twitter-based commentary of the ‘haven’t been there, haven’t done that, but will compose a few pithy one-liners that encapsulates the experience anyway’ variety.

To be sure, I haven’t been there or done that either. I’m watching from my computer screen like everyone else who can’t  make it to New York to see the show in person. But the livestream broadcast has been conceived specifically with me in mind, and on that score, at least, I feel qualified to comment.  I might find the decision to stream the performance more convincing if the live streaming technology wasn’t so frustratingly inadequate for the task. Perhaps if I could sit and stare at Abramoviç and her rotating partners for hours on end myself, I might find some unexpected payoff in terms of understanding the impact that the internet, social media, and online interactive technologies have on our notions of “presence” nowadays. But if MoMA really wanted to figure out a way to “communicate the ideas in the exhibition online,” as Hart noted in his blog post, it might have instead experimented with face-to-face internet technologies (like Skype video) that could allow Ms. Abramoviç to share her gaze with random strangers online, if only for a few select hours of the overall performance time. You’d lose the fiction that “anyone,” potentially, could sit with the artist, but would retain some degree of live intimacy while complicating that very “liveness” with the notion of a gaze shared in cyberspace. But as it stands now, MoMA’s livestreaming of Abramoviç’s performance merely confuses access with insight, visibility with presence. Sometimes it’s okay to say you just had to be there, and leave it at that.

Got a response to this post? Let us know! Email your comments to  mail@badatsports.com. We’ll feature thoughtful responses to issues generated by our entries in future blog posts.