Interview with Edra Soto: Heaven, Hell and ‘the Jesus of Dogs’

In Memory of Who I Was

“Forever Vegetal” is the head-scratching title given to two concurrent solo shows at Roots and Culture featuring new work by Brian McNearney and Edra Soto. The exhibition opened earlier in December and will close this weekend on January 16th. Over the weekend I spoke (o.k., emailed with) Edra Soto about the new works she created for the exhibition, which tackle all the Big Issues: Life and Death, Heaven and Hell, Roman Catholicism, Michael Jackson’s pet mouse Ben, and Soto’s lovable canine, Foster, aka “the Jesus of Dogs.”

Your show at Roots and Culture begins with a piece that takes the form of a shrine and is titled “In Memory of Who I Was.” To me it seems to frame the entire show.

Edra Soto: “In Memory of Who I Was” is a shrine that commemorates my innocence, my past and the person I will never be again. I was also trying to make a memorial for myself as form of representing a transition. It’s never been a problem for me to find ways of representing art, but when I’ve been involved in great projects that have taken a lot of time and emotional investment, like my latest show at the MCA, it was making perfect sense for me to “kill myself” theoretically, to be able to speak about something different. There are a few transitional pieces in the show.
Initially, I was trying to make an art piece that compiled photos of me from childhood to the present, and have a small memorial of who I was until yesterday. I have explored the concept of time passing with memorials, like in A Year In Review and Landfill exhibited at Gallery 400 and Memorial at Polvo, all in 2005.
What I like the most about this piece is that it seems to be confusing to some of the audience that have seen it. It’s a completely intentional set up of a digital picture that looks faded by the sun and an arrangement of dry roses. 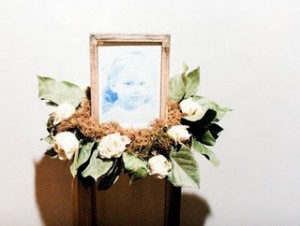 In your exhibition statement, you mention the influence the Roman Catholic church had on you during your childhood. The works in this show seem to bounce back and forth between a tongue-and-cheek approach to religion and one that is completely earnest. Can you tell us a bit more about the ideas behind two of the pieces included in the first room, one of which is titled “Communion” — which to me resonates as a vision of the Church’s promise to unite the human/mundane and the divine (through transubstantiation, the miracle of Mary, etc.) and the other titled “This is the Darkest Hour” — which makes me think of a door knocker you’d see at the gates of Hell?

Edra Soto: Talking to curator Julie Rodrigues [of Chicago’s Museum of Contemporary Art], I realized that I have two different ways of explaining my work. One is the story of how I came up with the idea, which tends to be too long and maybe unnecessary, and the other one is the resolved concept that I hope is the one people read when they look at my work…not necessarily something that will always happen. “Communion” was conceived in Puerto Rico while staying at a hospital taking care of my mom. I understand the concept of communion, according to the Catholic Church, as accepting the body of Christ. I also see it as unconditional love. That’s why I represent this concept by placing two winged figurines that are attached by their head through a prism type of organism that could be a cloud or a rainbow. The two figurines are part of my parents’ commercial ceramic legacy [ed. note: Soto’s parents were ceramic artists who owned and operated a commercial ceramic business]. Those two pieces are little mice with wings that were never painted. Some days after finding these figurines, I saw a movie on television about the story of the Jackson 5. In between all the eccentricities that compose Michael Jackson’s life, there was a story of him talking to a little mouse named Mr. Ben in the kitchen at night with a flashlight. 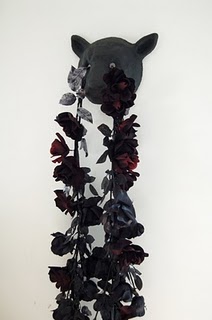 This Is the Darkest Hour

The figurines find seem more exiting and cosmical, since–I know they were strange for some people–but for them to have some connection with a story was almost impossible for me to put together until I saw the story of little Ben. This is consistent with my fascination and tendency to bounce from the very personal to the popular/fictional culture and life of people I do not know. As I have told people in the past,I grew up in front of a TV, so popular culture is part of my language, but I’m determined not to have it be the only defining tone of my work.
On “This is the Darkest Hour,” I was seeking to make a representation of what hell could possibly sound or be like if transformed into some kind of embodiment. I chose as a point of departure, a mask of a lamb that I found on Halloween and made a cast of it. I kept thinking about the idea of a black sheep to represent this character…endearing and scary at the same time. On my perception of Hell I see a very ostentatious place, and I also see heavy metal music and darkness. This is the first time I got to collaborate on a piece with my husband Dan Sullivan, who is the guitarist and one of the writers for local metal band Arriver. I already made the connection of what song I wanted to use for this piece, and it just happens to be one of the songs he wrote call “This Dark Corner of the Continent”. The lyrics are not present in the loop I asked to be extracted from the song. I thought the austere sound is remarkable by itself. As I mention in my statement, I was motivated mostly by other artists’ interpretations of the ideas of Heaven and Hell (in religious art, contemporary art, and music). 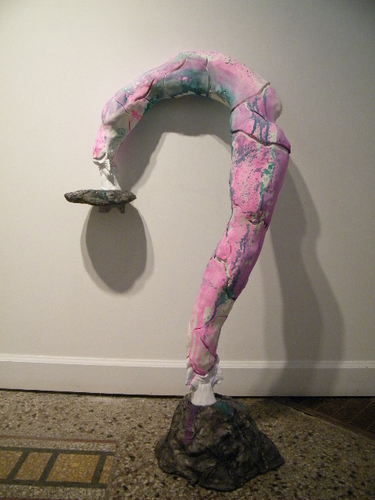 Earlier last year, preparing for a lecture I did on William Blake for the Artist Connect series at The Art Institute of Chicago I realized that my Iris Chacon work had a mystical quality, intensely honest but not necessarily recognizable at first sight. When I started pairing my work to Blake’s, I saw a unexpected similarity (especially in the compositions) that moved me deeply. People in the audience during the lecture asked me if I based my work on William Blake’s paintings. I discovered Blake’s paintings after making my own, so the answer was no. That moment has stayed with me and I have carried on with my reflections and conceptual developments.

The conflation of human and animal forms is a visual trope we’ve seen before in your work, as in the drawings shown in your MCA 12 x 12 show combining your features with that of a gorilla (all drawn by other artists). In your Roots and Culture show, we see numerous pieces in which animals figure prominently. Can you tell us more about two of the drawings in the show, “The Jesus of Dogs” and “The Lion and the Lamb”?
Edra Soto: Different from the mutations other artists made of my portraits for the Chacon-Soto Show, I portray my pets as part of my ecclesiastical roster. I had them assume the role of Jesus and The Lion and the Lamb. My pets’ idiosyncrasies tend to be the subject of many conversations among my husband and I and our friends (since we have no children). I found my dog in my neighborhood a couple of years ago. He has been instrumental in episodes of my life that manifest themselves in different ways in my artwork. My husband nicknamed my dog Foster “The Jesus of Dogs,” mainly because Foster is an incredibly nice and beautiful dog (and sort of looks like Chewbacca).

My cat on the other hand has challenged our compassion and patience through the years, but we have held on to him and him to us. 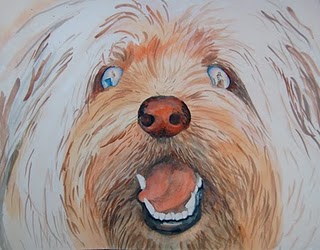 The Jesus of Dogs

Where does the imagery in your work spring from? Do images like the ring of dirt-encrusted stuffed animals in “Forever” or the Goth-inflected funereal wreath dripping from the eyes of the lamb in “This Is the Darkest Hour” come into your head all at once or intuitively like a dream or a vision, or do they develop over time and through processes of revision, in a more recombinatory fashion?
Edra Soto: The first thing I do before starting to make a body of work is research my theme. I look for every possible reference that I can find, read from all kinds of sources, take a lot of notes, do a lot of writing. I then come up with a concept and the repertoire. The titles are developed as if I was making a record and these are the hits I want in to include. Forever, for example, came from the idea of making a tombstone that reflected eternal light, or the light that shines forever, or the life that will never be forgotten. It has an obvious influence from pop culture (the “Billie Jean” video by Michael Jackson). I’ve always been a huge fan, and do not mind that the reference can be seen in that manner, but I try to avoid the literal reference so as to keep the subject more universal.

Light Within the Dark

Although you use recognizable iconography in your sculpture and installations, the connections between the different element can be difficult for the viewer to tease out. There is a cryptic nature to it. You are drawing from a personal lexicon of cultural symbols/images — the gorilla, for example, which appeared
in The Chacon-Soto Show at the MCA and again in your installation “Crying for the Beast” at the Artists Run Chicago exhibition at the Hyde Park Art Center. Given that a lot of your imagery stems from a personal take on popular culture (including popular religious culture), how do you imagine someone who doesn’t share those memories/cultural history might find points of entry into your work?

Edra Soto: Hopefully, the images that I’m utilizing to represent these concepts are universal enough to transcend any perceptual differences. It is an important and difficult question that I ask myself all the time during art making. I try to be as generous as I can in my expression without compromising my integrity. 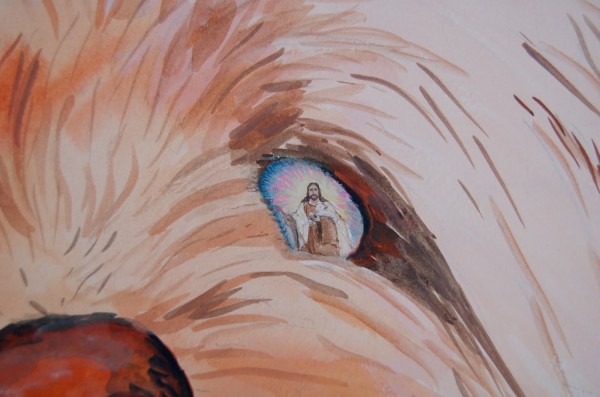