A Q & A with Richard Rezac 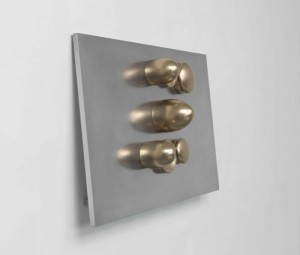 Richard Rezac has a wonderful exhibition up right now at Rhona Hoffman Gallery (through February 2, 2010). In addition, the Modern Wing of the Art Institute is currently displaying six Rezac sculptures (spanning the years 1985-2008) from its Collection — they’ll be on view through early May. Rezac had a survey exhibition at the Gahlberg Gallery of the College of DuPage last year (the exhibition’s catalogue, which contains an enlightening essay by James Yood, is available for download on the Gahlberg Gallery’s website; just click on the link above to go there).

Richard generously agreed to answer a few questions about his latest works via email. I’m very grateful to him for taking the time to provide such illuminating and thoughtful responses.

That 11 month experience in Rome and in numerous parts of Italy has had a strong, and I trust, lasting effect, though because it was so substantive, I still do not know the extent of the influence. My purpose was to study the Baroque architecture of Francesco Borromini, whose 11 or so buildings are all in Rome. My approach in taking this in was naturally one of an artist, not an historian, though I certainly read what I could about his work and that of his immediate predecessors and those he influenced, especially Juvarra and Guarini in Turin. 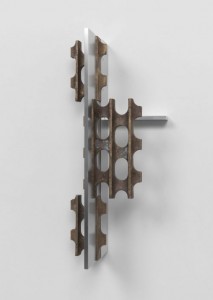 The great pleasure was in seeing Borromini’s architecture (and eventually a large group of drawings in Vienna) on a near weekly basis, allowing me to feel aspects of his accomplishment and study many details. I was also privileged, by the American Academy’s offices, to gain entry to parts of his buildings normally off-limits.
The effect on my sculpture is not so clear to me, other than a continuation of some complexity – several materials or layers or juxtaposed forms within one work resulting in a, perhaps, more broad, gently argumentative, dynamic. In the long arc, though, of my sculptural language from the past 25 years, there has been an evolution from simple and concrete form to more extended, thin, linear and colored form, so the desire to be around Borromini’s architecture was in some sense anticipated by my work before I went there.

Along with architecture, I often think of interior design when viewing your sculptures. Some of them, for me, bring to mind things as mundane as contemporary kitchen and bathroom fixtures! After coming home from viewing your show, the kitchen faucets, towel racks, and cabinet knobs in my house–the particular geometries of their placement and their relationship to my body–all of a sudden stood out for me. Even the old-fashioned diamond tile in my bathroom floor started to “dance” for me in new ways. Am I being overly-specific here, or do you yourself ever draw inspiration from commonplace domestic interiors?

There is certainly a resemblance to ornament, facets of interior design objects, furniture, and architectural detail, such as moldings, in my sculpture of the past 6-8 years. I attribute this mainly to geometric form – the basic language in which my sculpture originates. Perhaps most manufactured applied design objects rely on the ease of elemental, efficient geometric forms. So there is an overlap, to be sure, between the common domestic accessories often handled or those elements produced in multiples as in tile flooring and the appearance of some of my forms or combinations.

I consider most of my sculpture, and all of those that are untitled, to be abstract and they may only arrive at some suggestiveness or association to domestic elements when completed and then exist in our space. I have rarely begun a work with the intention of representing another existing form, if anything it is in pursuit of a persona or complex phenomena. I am most interested, in as much as is possible for me, in starting with nothing and finding a satisfying form or arrangement. 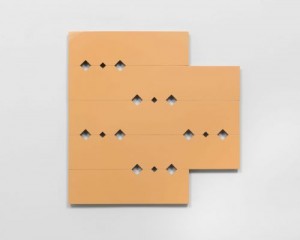 Your sculptures are typically scaled to the human body. The size, scale, and the perceptual shifts they offer makes them especially suitable for installation in domestic spaces; living with an artwork allows for a very personal and yet ever-changing relationship with it over time. I’m curious to know if you are interested in making large-scale public sculptures? 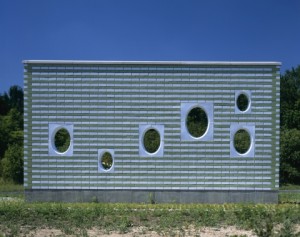 Over the past 20 years I have been engaged in public work proposals and completed commissions: sculpture, urban plazas, landscaping and applied design (fencing and transit shelters). There were three temporary outdoor site works (Atlanta, Amsterdam and Chicago), but the only permanent work is “Frame,” 2006, at Governors State University in Illinois.

It is true, though, that the primary focus for me has been studio work, and also true that human scale tends to be my measure for sizing, and to some extent, the forms themselves. The obvious advantage to making studio work is the open-ended time and control that I can exercise – the greater personal nature that can be embedded because excessive engineering, material restriction, the near-necessity for outside fabrication and public input are not involved. 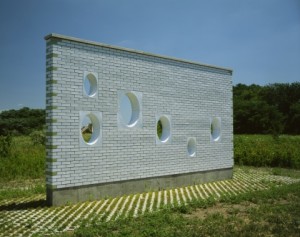 The advantage and satisfaction that comes with a realized public project, though, is the challenge in answering it appropriately by tailoring the work to a specific place and history, its permanence, and the wide audience that can experience it. Even in the public works that I have made or that reached a final proposal stage, in every instance they rely on human scale: low to the ground and spread out, as in a garden, or in reference to domestic architecture space, or as in the example of “Frame,” the horizontal row of mid-sized windows which are set at my eye-level and represent a picture wall, as in Victorian oval frames, directed toward the prairie landscape in two directions. (This wall is situated along the main path from the Metra station to campus, so commuters walk past and in a parallel orientation to the sculpture).

Can you tell me a bit about the floor piece titled “Aesop,” 2009, that’s currently on view in your show at Rhona Hoffman Gallery? In the gallery press release you mention that it is an abstraction of a portrait of Aesop you encountered while in Rome.

I had the privilege of visiting the Albani Villa in Rome and its private collection of antiquities on two occasions. In one room was this figure, found at Hadrian’s Villa in Tivoli during the Renaissance period (this family collection dates to the Renaissance, and supplied the Louvre, British Museum and Glyptoteck in Munich with many of their Roman marbles). We were told by the guide/gardener of the estate that this hunchbacked figure was a court entertainer at Hadrian’s Villa, but it seems more likely, as posited by Historians, to be a portrait of Aesop, who in the literature was reportedly severely distorted physically. This sculpture’s face was calm and noble, with full beard, and his limbs were shortened and tucked in front with an original fig-leaf exposed. His back side was arched, collapsed and visually abstract, resembling an Arp sculpture. When I saw it first I was thrown off-balance, and when given the opportunity to make a second visit (and we were only given about 10 – 20 seconds in each room before being coaxed out), this sculpture was the one work that I most wanted to see again. 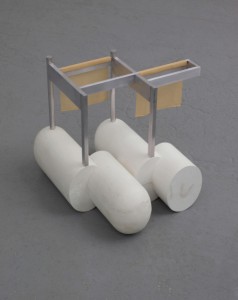 So much of the impact was with the circumstance: surreal in some respects, and the very brief time allowed (strictly no photography, but I did make a brief sketch on the second trip). The sculpture’s compression and sheer beauty and seeming contradiction was profound to me, so when I embarked on my sculpture, it was only at mid-course that I felt a kinship – nothing literally descriptive was involved. For several months it only included versions of the lower hydrocal forms, then later took on the aluminum restatement of its orientation along with the cutting of one hydrocal element, and lastly the silk as a connector between the two initial materials and forms. As much as anything, “Aesop” now conveys to me a sympathy to the Roman period of sculpture.

I noticed that in the show at Rhona Hoffman, the orientation of the sculpture Untitled (09-08), 2009 was different than indicated on the drawing study (Study for Untitled 09-08), 2009. Do drawing and sculpture offer two different, and equally acceptable, possibilities? Are your drawing studies ultimately meant to exist independently from their corresponding sculptures?

The two drawings for sculpture that you cite are somewhat unusual by their disorientation. The sculptures did turn at an angle before their completion, and in resolving their particulars, the sheets also were hung at the same diagonal to guide the way. Similarly, some drawings become stitched with a second sheet, as the placement migrates or the size grows during its formation. I have always made one or several drawings as studies for every sculpture over the past 30 years, so drawings always function as the lead in defining the sculpture. As they are working drawings, I try not to compromise their purpose by making them more acceptable as two-dimensional compositions, either during or at the end of their use, so many are not interesting enough to present publicly. 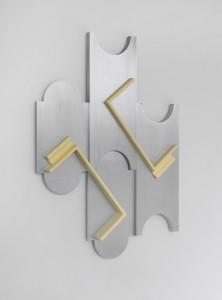 Those that I do frame and exhibit, by some element of chance, do offer, I think, an acceptable two-dimensional composition and can add an instructive entry to the sculpture and my process.

Do you listen to music in your studio? If so, may I ask what kind?
I do, but rarely when I am in need of concentration. The music I listen to is almost entirely classical, stretching from Early Music to mid- twentieth century, inclusive of many composers. I am an enthusiast in this area, but not knowledgeable. And I do attend concerts regularly, and this is one reason why I so appreciate being in Chicago with its access to great music performance.