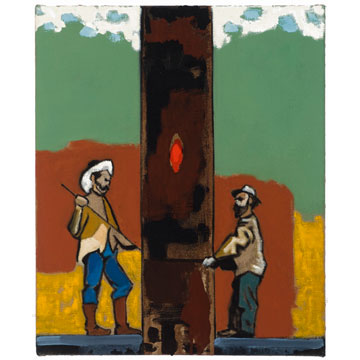 Our midweek roundup of clips from the art and culture blogosphere, in descending order of respectability:

*The Met’s “workshop Velazquez” turns out to be the real thing.

*A new chance to see what Jasper Johns called “the strangest work of art any museum ever had”: Duchamp’s Etant Donnes at Philadelphia Museum of Art.

*Rhizome interviews the curator of a So-Cal exhibition on World of Warcraft and its impact on media culture. Related: the real-world benefits of video games.

*Even no news makes news on the Annie Liebovitz financial front. Leibovitz is also being sued for unauthorized use of another photographer’s images.

*What?? Bjork and Matthew Barney split? Over Elizabeth Peyton? Gawker asks its readers if there’s any truth to the gossip, and is met with a resounding ‘who the fuck cares.’

*And finally, (this one’s for you Christopher): actor/starchitect-fucker Brad Pitt is rumored to have spent 50,000 pounds designing and building the perfect Gerbil domicile for his childrens’ pet rodents (via Unbeige).