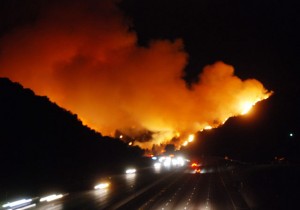 The Getty Museum on Fire? Not so far, according to the latest L.A. Times report. Thankfully the Center’s evacuation seems to have gone smoothly. Sad to say, but this kind of disaster is a regular occurrence in SoCal, and it’s not the first time the Getty’s been threatened by advancing flames.Â  Here’s hoping everything’s back to “normal” quickly. For the rest of what’s been happening so far this week, read on…

*Jason Foumberg of NewCity reports on the cessation of Individual Artist Grants this year, and in forthcoming years, from the Driehouse Foundation.

*Arts Stimulus Funding and the Art Economy: Hrag Vartanian at Art 21 explains it all for you (extremely clearly and well; especially useful for those of us who suck at math).

*In Chicago, interest in building a South Loop art scene is on the rise, but can it really happen in this economy? (Chicagoist).

*Art Baloney (via C-monster); but Regina Hackett’s spirited arguments in defense of the much-maligned meat make for a far better read, imho.

*Lynn Becker does it again: my fave architectural blogger gleefully deconstructs the wedding photos of a fab young couple who got married at the Art Institute (Edward Lifson took the gorgeous pics). Edited to add: I only just realized that “Lynn” is a he! Whoops.

*Sarah Jessica Parker talks to Artnet about her partnership with Bravo on The Untitled Artist Project (via Art Fag City, who also has an exclusive interview with the show’s casting director Nick Gilhool).

*Gallerist/blogger Edward Winkleman’s book “How to Start and Run a Commercial Gallery” to be released July 14th by Allworth Press. Click here to preorder the book on Amazon; Bad at Sports interviews Winkleman about running his own art gallery on Episode 169 of the podcast here.

*Check out the British Council and Whitechapel Art Gallery’s The Fifth Curator competition, for aspiring curators outside the U.K.

*Still, I don’t have one: app art for the iPhone and ipod Touch (Rhizome Inclusive). Here’s what’s thought to be the first music video shot on the iPhone.