Memo to the NYT: Enough with all the ‘Joy of Poverty’ Stories 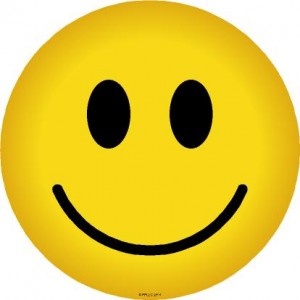 Hey New York Times, I still love ya, but please, just shut up with all those pseudo-uplifting “joy of poverty” stories that you’ve been shoving down our throats lately. Here’s a small sampling of what I’m talking about:

2/12/09: The Boom is Over: Long Live the Art!. This is the one where Holland Cotter told artists,

“…it’s Day Job time again in America, and that’s O.K. Artists have always had them – van Gogh the preacher, Pollock the busboy, Henry Darger the janitor – and will again. The trick is to try to make them an energy source, not a chore.”

That bit has already been roundly ridiculed on various arts blogs, so I won’t flog it any further. More recently, however, the Times published another of its attempts at an emotional pick-me-up, Tight Times Loosen Artists’ Creativity (5/19/09), in which an artist named Liz Fallon from Portland, Me. is cited as an example of how artists are learning to exult in their new-found freedoms, now that they’ve stopped selling work and can support themselves with crappy part-time tele-marketing jobs:

“As for myself, freed from the constraints of creating for a specific buyer,” Ms. Fallon wrote [in an email], “I’ve experienced my own surge in creativity and have been producing a great deal more than I used to. While it would be nice to still be getting paid for my work, the need to be more resourceful is having a beneficial effect on the arts community around me.”

In a follow-up interview Ms. Fallon said she supports herself working as a customer-service representative for a direct-marketing firm, and that the lack of commissions has enabled her to pursue new projects, like illustrations of classic children’s literature.

“Nobody wants me to do anything, so I’m just doing what I want,” she said.

Can’t offer a better retort than that already given by Susie Bright, who responded thusly during a related Facebook exchange (reproduced on the blog New Curator): 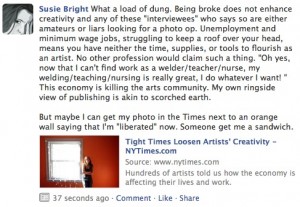 And again, on 6/9/09: Special Report: Contemporary Art: Getting Creative in a Downturn. Even the French are “getting creative” and (I love this) “rediscovering” drawing BECAUSE IT’S SO CHEAP.

“….In France, the slump has been marked by a return to traditional drawing, exhibited in a profusion of small-scale shows, often curated by art students….. Serghei Litvin Manoliu…said, “The golden boy approach to art is over.” His show, the 21st Century International Drawing Fair, was a crisis-friendly, minimalist affair, offered unframed works for around $300, displayed on tables in a bare, loft-like space in the hip Marais district of Paris.

“The art world had lost every criterion of quality,” he said. “I believe this crisis is a fabulous opportunity for the arts.”

And then there are all the slide shows and video portraits of mostly fresh-faced, mostly recent art grads smiling brightly in the face of their own economic peril (unsurprisingly, all of the artists profiled are white).
The latest, and thus far most obnoxious example of what I’m talking about: The Joy of Less, from travel writer Pico Iyer, writing as part of the Times’ new “Happy Days” blog (billed “the pursuit of what matters in troubled times”). This one takes the cake. Iyer begins his article with a little epigraph that features the uplifting words of a Dutch woman interned in a concentration camp (she was murdered at Auschwitz two months later). Oh yes he does! Then he goes on to describe his own impoverished–but still joyful!–circumstances, now that he lives in a two-room flat in “nowhere Japan,” (nowhere fashionable, we presume).

I have time to read the new John le Carre, while nibbling at sweet tangerines in the sun. When a Sigur Ros album comes out, it fills my days and nights, resplendent. And then it seems that happiness, like peace or passion, comes most freely when it isn’t pursued.

The Sigur Ros reference is the best part. It’s important to be chic, even (especially!) in the midst of “troubled times.”
But seriously, of course I feel bad for Iyer, who lost his home in a fire several years ago, and much of his savings more recently, along with so many others. And I’m certainly not against the whole ‘live simply and prosper’ ethos. I just don’t want it delivered by the New York Times, purveyor of obscene “Special Design Issues” that tell me I “must have” $525 folding chairs and bare light bulbs that cost $99 bucks apiece.
Not everyone is merely a tourist in the land of lost opportunities. The Times has always been oblivious to material conditions outside of its own select, imaginary readership. And, (as Cotter would say), that’s O.K. I expect that from The Times – it’s why I and so many other people love it. I don’t mind if they pimp me chairs that no way in hell I could afford. Just don’t try to sell me on the idea that I should be happy about that.