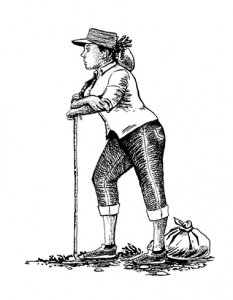 “Pilgrimage is one of the fundamental structures a journey can take–the quest in search of something, if only one’s own transformation, the journey toward a goal–and for pilgrims, walking is work,” writes Rebecca Solnit in the book Wanderlust: A History of Walking. Last summer artist Meg Onli (who, as you all know, blogs here at Bad at Sports and is an associate producer of the Podcast) discovered this for herself. Inspired by the perilous journeys taken by fugitive slaves along the underground railroad, Onli undertook her own pilgrimage by setting out on a 30 day, 440 mile trek that began in Montgomery County, Maryland, the birthplace of Josiah Henson (who inspired Harriet Beecher Stowe’s 1852 novel Uncle Tom’s Cabin) and ended at Dawn, a settlement in Dresden, Ontario that is the site of the cabin home Hensen eventually built for himself after his escape to Canada. 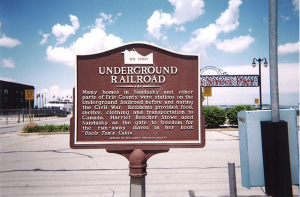 Onli’s pilgrimage has both historical and personal significance; she undertook it, she has explained, “in search of my blackness.” Her resulting Underground Railroad Project is both a record of that search and a conscious attempt to reenact and reconstruct a Black historical identity that has been (and is still, in Onli’s case) realized in part by the act of walking.

Before and after the journey, Onli worked on a series of drawings that featured a “doppelganger” version of herself beset by fears and anxieties about the road ahead. On the project’s website Onli notes that this fictional version of herself makes reference to fugitive slave posters that typically depicted runaway slaves as solitary figures who, as Onli describes it, are “careless and literally running for their lives.” The reality, of course, was that the road to freedom was made up of people helping other people, an informal network of human connections that required foresight, planning, ingenuity and steely resolve on everyone’s part to succeed. The Underground Railroad was anything but a mad dash for freedom; to successfully navigate it, it was necessary to walk, not run.

Consisting of drawings, photo documentation and performance relics, Onli’s The Underground Railroad Project will be on view in Chicago this Saturday, July 25th as part of the Twelve Galleries series of exhibitions. The opening reception is from 7 to 10 pm this Saturday evening at this address:

If you live outside of Chicago, you can view photo documentation and extensive artist-authored commentary from this remarkable project on Meg’s website here.

A postscript: prior to beginning her walk, Onli wrote a series of letters to companies such as AIG, Union Pacific and CSX that have profited from Antebellum labor asking them for project sponsorship. Onli saw this as a potentially symbolic gesture on the part of these companies, akin to that of reparations to African Americans for slave labor and its aftermath. A total of twenty companies received letters, but none agreed to participate. 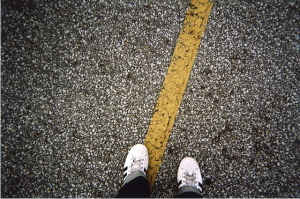