This past Friday I attended The Operature an exhibition by the collective ATOM-r (Anatomical Theatres of Mixed Reality) at the National Museum of Health and Medicine Chicago. This exhibition was held in two parts an interactive installation and 90 minute performance showcase. ATOM-râ€™s participants include Mark Jeffery (choreography), Judd Morrissey (text and technology), Justin Deschamps, Sam Hertz, Christopher Knowlton, and Blake Russell (collaborators/performers).Â The ATOM-r collective explores the application of forensic science and anatomical mapping, as viewed through the through the scope of performance, technology, and language. What struck me most about the exhibition was the poetic consideration of the body and the layering of segmented perspectives visually, technologically and through dance. This is especially true of the performance where the dancers bodies move like they are being examined for medical display, like they caressed with love or sex, like in battle, and like the ritualistic laying out of the dead all in one sequence. When combined the layers of sourced gesture seem not as if disjointed but in an embracing collaboration of movement. I feel my observation of this exhibition is like looking through a magnifying glass peeping in to catch glimpses at what is a large body of accumulated research.

The installation included a 15 monitors that displayed the interactive exhibitionâ€™s language poetry and digital art that seemed like entries dense with interconnecting references selected from an accumulation of archived materials. The Operature. Attendees are able to pick up cards with medical and anatomical imagery and show the QR-code to a camera provoking a response and changing the exhibited material as a corresponding text begins to dance across the screen blinking in and out. On other screens images of head cut into thin slices spin resembling the process of cross-sectional scans of bodies under anatomy study, or the presentation of anatomical evidence on glass slides. The dissection of slices is also seen in the exhibitions use of language fragmentation and the multifaceted perspectives created by technology that includes both in the installation and performance.

Upon entering attendees are prompted to download an app that allows them to interact using their smartphones during the installation and performance. Audience members found themselves taking on the roll of investigators drifting around the exhibition looking for signs, images, and codes that they could scan using their camera phone. Once scanned, these images display technological overlay ghost images and text that seem as if they had already been there, invisible, waiting for you to discover them. Often I find technological interactions to fall short but there is something consistent about the concept of a phone app that allows you to view an augmented reality layer in an exhibition based off anatomical theaters, where the audience becomes an investigator of anatomy. It was one of the best uses of interactive technology I had experience in an exhibition. This inclusion of the technological other worlds slips in and out of the subjective, pushing realties/non-realities together and is an integral interaction when used during the performance piece.

The collective stratum of reference is something you encounter in every aspect of ATOM-râ€™s performance. One can view the piece from multiple vantage points choosing to sit in pews, walking among the performers, or standing above the performance looking down on it as in an operational theater. As the performers dance Judd plays the role of conductor, controlling projected displays of text reiterating those used in the installation, and reading them aloud as he performs.

He also provides the attendees with a technological viewpoint, displaying his live video of the performance showing the virtual reality ghosts we first encountered in our own investigations of the installation. The spoken language of the piece was delivered in the same cold cut tone as a scientific manual but had the touch of deeply personal poetics of the struggle with the body. The text provides us with many concepts such as the examination of the body as house, the treatment of the dead, and the histories of anatomical theater. One of the most interesting sources is the text sourced from the â€œstud fileâ€ of writer Samuel Steward describing details and observations about his various erotic encounters with men. These excerpts when juxtaposed with the anatomical body texts create an interweaves narrative of the gay male body.

The expert choreography composed by Mark Jeffery and his collaborators holds the audience captive while working in correspondence the technological devices. The all male group of performers embraced, wrestled, fell, carried one another around the room like corpses, posed for examination, removed and readjusted each otherâ€™s buttons and zippers, each performer functioning simultaneously as the displayer and the displayed. Even the lights become dancers moving around the room and repositioned by performers. Observes peer into the dancers bodies, guided by the ever-present examiners lights. As the scenes are constructed I am reminded of the painter Thomas EakinsÂ and his paintings of medical theaters. The audiences enters ATOM-râ€™s The Operature like a crime scene, attempting to paste together all the clues given through the use of dance, poetry and art as evidence. To quote text from the exhibition, â€œthe evidence looked back at you awkwardly and defiantlyâ€, asking you investigate the margins of these clues. Your reward for your exploration is an involved and richly layered experience that speaks to the poetics of anatomy and left me feeling touched to the bone.

If you would like to see it for yourself the exhibition continues till March 29th. There will be two more shows this coming weekend on Friday and Saturday. The interactive exhibition is open at 6pm and performance begins 8pm. National Museum of Health and Medicine Chicago, 175 W. Washington, $15 at the door. Here for more info. 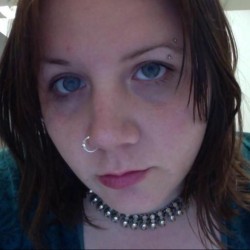