Inside the Outside: Richard Loving and Eleanor Spiess-Ferris at Hyde Park Art Center

Chicago Imagism represents something more complex than a published manifesto, an aesthetic engagement, or a theoreticianâ€™s aim at creating an avant-garde. One might argue that Chicago Imagism, an internationally recognized movement with roots in the late 1960â€™s and early 1970â€™s, is still alive and well in the second city. On his 90th birthday on January 26, 2014, Richard Loving explained to a rapt audience at the Hyde Park Art Center, that his workâ€“like the work of other â€œImagistsâ€â€“were simply about making the work that they wanted to make.

In their current exhibit, Inside the Outside at the Hyde Park Art Center curated by Aaron Ott, Richard Loving and Eleanor Spiess-Ferrisâ€™s works on display span two careers that aptly describe the very complicated historicity of the Chicago Imagist movement. Inside the Outside is a critical investigation of the ambiguous framework of Chicago Imagism and how these two very different artists bound geographically but also aesthetically chose to utilize its tenets to spur their artistic visions.

The works are hung chronologicallyâ€“a relatable choreography that adequately stresses the aesthetic distances traveled and the hard earned merits of two lives of artistic engagement. In relation to the Imagistsâ€™ aestheticâ€“high key color strategies, figuration, symbology, and text to name a fewâ€“these works can fit the bill. However, the distinction as Imagist work may also deprive them of the singular translation they so deserve. 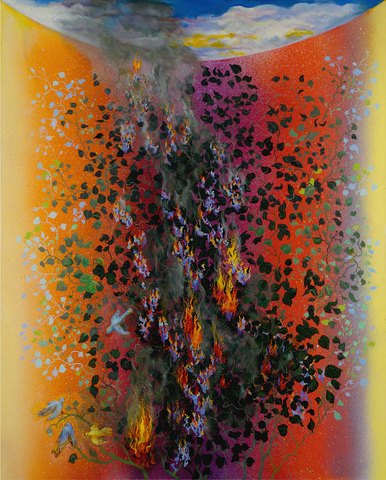 Spiess-Ferris and Lovingâ€™s works are clearly about themselves. Throughout the show, there is an overwhelming sense of self discovery or exhibitionism that develops into a confident vernacular that is uniquely their own. In Lovingâ€™s case, this idea takes the shape of a materials quest, that over decades evolves from small enamel works that become large format abstractions and matriculate to color drenched dreamscapes that embody the entire narrative. They are Lovingâ€™s accumulated wealth of knowledge with his materials, and a pointed emulsion of his interests.Â  Lovingâ€™s work â€œFire and Smokeâ€ is one such amalgamation.

Hovering above the very unnatural bands of lush color is a curved horizon that encloses the space of the painting and alludes to an inevitable endingâ€“a forced punctuation. This curvilinear maneuver has become a staple in Lovingâ€™s later works and allow for the landscapes to remain in the netherworld of abstraction while maintaining the graphic qualities central to the Imagist aesthetic. Lovingâ€™s narratives are not forthcoming, but they reveal enough of itself to spend time with their mysteries. The paintings can operate as storyteller or simply as an object of contemplation, and therein lies their success. 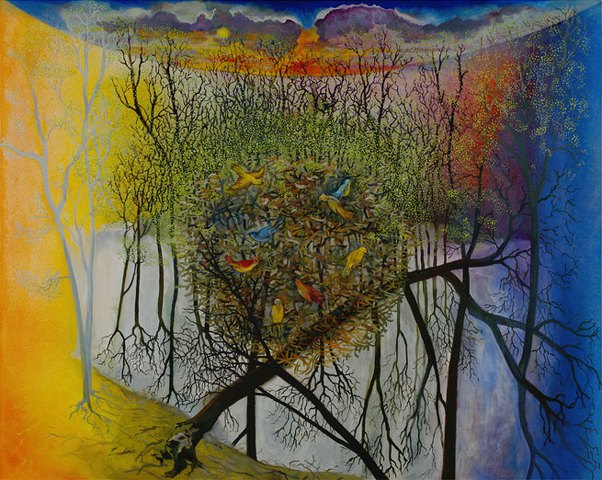 Richard Loving “In a Budding Grove” 2008

On the surface, the narrative elements seem to be more readily available in such works as Spiess-Ferrisâ€™s â€œResignation,â€ where the viewer is immediately immersed into a parallel universe that is completely her own. The cast of characters is the entry pointâ€“as there is a familiarity that grows from one piece to the next. Everything in Speiss-Ferrisâ€™s paintings is as familiar as the paint itself, yet there are no answers to her riddles either. The paintings allow you to meander through them, but never actually be a part of the placeâ€“it is her singular experience of a world in which the viewer has no role. It is in the moments of expectations unmeant that the viewer can understand their exclusion. â€œResignation,â€ exudes Speiss-Ferrisâ€™s anguished charm while allowing for self discovery through her range of emblematic totems that find their way into her imagined worlds.

The show also presents some of Speiss-Ferrisâ€™s drawings where one can see the artist looking at her creations from without, while also participating in the ironies and chagrin of human awareness. In â€œAcquisitionâ€ the sketched portions of the drawing remain as portals into her studioâ€“a nod to herself and remnant of her hand. 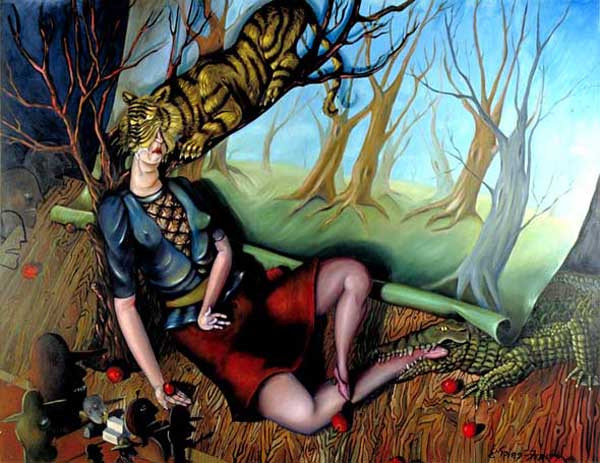 This elusiveness and earnest approach to her materials has kept Spiess-Ferris on the periphery of Imagism. Her work is an acidly good-natured view of human follies, largely concerned with the roles and relations between women and nature. She presents the human comedy through her imagined places that are often absurd, charming, hostile, seductive, and ridiculous. Charged with strong doses of painfully comic self-discovery, her host of symbols, images, and characters all play theatrical roles in the ongoing comedy that is a perpetual remix of itself.

The affinity to nature, the paint handling, geography, and the parallel working timeline are enough to link these two artists, but the strength in this show comes from both artistâ€™s unflinching dedication to their practices. Decades in the making, their works have evolved and remained on the edges of a discussion that Chicago painters cannot seem to avoid. Imagism is the staple, the running joke, the license, and liberator for Chicago painters. It is the all-encompassing genre most aptly described by Richard Loving as â€œjust making what we wanted to make.â€ 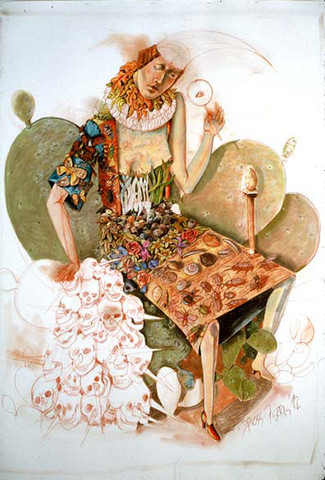 To pair these two artists in a conversation about the reaches of Imagism was to operate on the peripheryâ€“to think outside the proverbial box. As the Hyde Park Art Center enters into its 75th anniversary year, a show to kick off the celebration that commemorates a pivotal moment in the centerâ€™s history as well as the history of Chicago image making was a grandiose gesture, most welcome.