Detroit: Now with people in it!

For decades, Detroit has performed a facile and impoverished symbolic role in our regional and national consciousness. You know what the city represents almost by instinct: abandonment, danger, the slow yet violent death of once-mighty American industry — the death, even, of the American city.

The proliferation of this looming, limiting symbolism has been accelerated, in the last decade, by advances in digital photography technology and online connectedness, which have made exhibiting photographers of us all. Amateurs and professionals alike come from all over to photograph Detroit’s ruins (and then share them with their social networks). These crumbling structures are astonishing, when you’re not used to them (and even, sometimes, when you are). They’re hulking, haunting, impossible, darkly transcendent. Photographed, they have real power as memento mori. A “unique glimpse into the sublime, where time seems suspended and the glory of a civilization now past has taken hold of the onlooker” motivates the taking of such pictures, according to Detroit Institute of Arts photography curator Nancy Barr.

But, of course, these photos are contentious. They typify the “predatory side of photography” that Susan Sontag wrote about in 1977 in On Photography. (“The photographer both loots and preserves, denounces and consecrates.”) They’re touristy, superficial, embarrassing; more to the point, they nakedly dramatize the power dynamics that sustain a society in which some people are born and live among ruins and others can swoop in, photograph them, and return to their lives of material comfort.

And they keep us cornered, these photos. “This is what you are,” they say blandly to a city that is tired of getting shit on by hostile outsiders. They come to define us, to those who don’t know our warmth and industriousness.

But! There are people here. All kinds of people, in fact. People who are struggling, yes, but also people who are choosing to live differently. People who’ve lived here all their lives and people who come from far away. People who are finding new ways to support one another. They’re designing and creating viable public spaces, they’re farming the land, they’re learning to live in ways that are not inherently hierarchical, they’re making art out of the rubble. Is all this new? No. But for the first time in a long time, it’s news. In a surprising turn, the people in this city are starting to compete with violent death and empty buildings as objects of outsider interest.

Detroit Revealed, the new exhibition at the DIA that showcases ten years of Detroit photography by eight different photographers (four local, four not), reflects Detroit-as-symbol in the expected ways (“predictable,” the exhibition text readily admits), but also in some of these newly-understood ways. It’s notable because it reflects a tentative understanding of Detroit’s real urban complexity, a complexity that has lately eluded it in the popular consciousness.

Included in the exhibition are a few spectacular works by New Yorker Andrew Moore, recently famous (or locally infamous) for Detroit Disassembled, one of a current crop of Detroit urban ruin books (with accompanying shows in Akron and Queens). His masterful photos (surely among the best in the genre) are some of those that get reproduced ad nauseum online. They’re given new power in the museum setting by their scale (the one below is 5′ x 6′, and feels like you could walk right into it), but they are, ultimately, among the least interesting works on view because they’re already so familiar. They trade in that old symbology, those well-worn truths, and feel dated next to the vibrant portraiture of Corine Vermeulen, Carlos Diaz, and Dawoud Bey.

Detroiter Scott Hocking’s work is some kind of cousin to Moore’s, but it’s the cousin you’d rather sit next to at the family holiday party. Hocking is interested in ruin and abandonment, but as a starting point, not a conclusion. His photos include work that is about photographing the city’s ruins. It also includes urban landscapes taken in parts of Detroit that are being re-claimed by nature, and photographic records of his installation work, like Ziggurat, erected in the Fisher Body Plant 21.

Michelle Andonian, another Detroiter, is concerned with documenting the city’s changing auto industry. Her beautiful shots of Detroit’s modernized Rouge Factory participate in an old photographic conversation about Detroit industry. Her work is worlds away from Andrew Moore’s in spirit, but shares with it a technical fluency, a sense of elegant spectacle, and a concurrent sense of, well, predictability. (Though it’s a valuable reminder that while we always talk about Detroit as a post-industrial place, industry does still live here, in however diminished a role.)

So that’s the familiar story, told in accomplished new images. True? Sure, as long as no one confuses individual photos or sets with the whole truth. Insightful? I guess that would depend on the viewer — and how much time she spends reading the captions. (Sontag also reminds us in that still-incandescent book that, “Strictly speaking, one never knows anything from a photograph….Only that which narrates can make us understand.”) But in this exhibition, it’s the faces, ultimately, that really count; the arresting portraiture tears you away from the machines and the ruin.

Local artist Carlos Diaz has photographed Latino immigrants living  in Southwest Detroit. The six direct, beautiful, black-and-white portraits are all enclosed in round frames, hearkening, as Nancy Barr notes in her exhibition catalog essay, to the Renaissance and tondi (but also to family portraits). Diaz thinks of them as “road maps,” each evoking its subject’s individual journey to the US. Because of the compositional similarity of the six portraits, the distinctiveness of each subject is striking. And that, according to Diaz, is part of his point — to break apart the monolithic “Latino population of Detroit,” so often discussed in terms of “illegals” and “aliens,” into individuals.

Corine Vermeulen, a Dutch transplant to Detroit, finds seemingly countless fascinating subjects in her travels around the city, paying special attention to members of communities that live in some kind of opposition to normative American values: urban farmers, social justice activists, exhibitionistic electronic music freaks. Like Diaz’s subjects, Vermeulen’s look directly into the camera, but she usually shoots them from a wider angle, allowing their surroundings to enrich her characterizations. Her work is perhaps the most legitimately revelatory of the included photographers’, reflecting an enthusiastic awareness of the variety and character of people who are drawn to and inhabit this curious, and frequently wondrous, city.

The work of the final two photographers, Dawoud Bey (from Chicago) and Ari Marcopoulos (based in NY, originally from the Netherlands) includes photographs and video pieces (much to the chagrin of a bloviating crab-ass who saw the exhibition when I did and couldn’t believe there were video pieces in a photography show). Marcopoulos contributes what was, to me, easily the most thrilling piece on view, a short video of Hunter and Shane Muldoon, two kids who are in a rock band with their dad, making screeching, blissed-out electronic sound art in their amazingly colorful Southwest Detroit bedroom. (You can see some of their equipment in the shot below.) When they finish their pulsing sonic assault and look up, they smile sheepishly and you remember that they’re 10 and 13. “There you go,” says one. “All right,” says the other. Fin.

Bey, who was an artist-in-residence at the DIA for a year in 2003, spent much of that time talking to teenagers at (the now closed) Chadsey High School. He also photographed them sumptuously and sensitively, and recorded interviews with them that become incredibly intimate video portraits. In the videos, the kids’ faces are shot in extreme close-up, and the camera roams restlessly, stopping for a moment on their eyes, their mouths, their noses, rarely able to fit more than one feature in the frame. Excerpts from four of these poignant, self-searching interviews play on a loop. They include a Latina immigrant discussing the experience of leaving much of her family behind in her home country, a Romanian who misses the quiet country nights of his, a Detroiter talking about life without a father and learning to avoid trouble and build his character, and an Arab-American Muslim who upsets her parents by refusing to wear a headscarf, because she’s “proud to be beautiful.” (Still portraits of Yahmney and Gheorghina, those last two, are included in the show.)

I tell people sometimes that you go to Detroit to learn what “community” means. They look at me funny, since the news has told them that Detroit is where you go to get shot. But this has really been my experience, and the experience of many others. Whether because of the adversity or in spite of it, Detroiters come together in inspired and inspiring ways all the time. Maybe that’s why I was so drawn to the portraits in this show, and felt like some of the other work was well-executed old hat. There are plenty of things (monumental things, moving things, broken things) that people have devoted plenty of time to staring at in Detroit over the last ten years. But our faces? Those are worth a closer look.

So will people have a better understanding of contemporary Detroit after visiting Detroit Revealed? Well, you know: “The knowledge gained through still photographs,” the great lady wrote, “will always be some kind of sentimentalism, whether cynical or humanist. It will be a knowledge at bargain prices — a semblance of knowledge, a semblance of wisdom….” But they might leave with an ever-so-slightly more nuanced vision of Detroit, some version of the expanded sense of possibility that they afford other big cities in this crazy country all the time. And hey — that’s a start.

Detroit Revealed is on view until April 8, 2012 at the Detroit Institute of Arts. 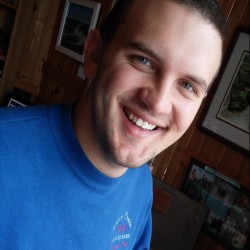 matthewpiper
Matthew Piper is a Detroit-based librarian and writer. He tweets haphazardly as @matthewsaurus.

Latest posts by matthewpiper (see all)