The Chicago Weekly has a lengthy and moving obituary of artist Margaret Taylor Burroughs, who died on November 21st at her Bronzeville home. Burroughs was co-founder of the DuSable Museum of African American History and also helped found the South Side Community Arts Center.

The DuSable Museum will celebrate the life and legacy of Dr. Margaret Burroughs this Saturday, December 11, 2010 from 10:00am until 5:00pm. The day’s events will include filmed interviews about Margaret Burroughs, a symposium on her life, children’s workshops, musical and spoken word performances, and exhibition tours.Admission to the event is free; please R.S.V.P. at (773) 947-0600 ext. 627.

A brief excerpt from the Chicago Weekly piece on Dr. Burroughs follows:

In 1940, at age 23, Burroughs became the youngest founder of the South Side Community Art Center (SSCAC). During the Depression, with money from the Work Projects Administration, a coalition of Bronzeville community members sought to turn a former railroad menâ€™s club into a public art center. The 3831 South Michigan address was across the street from the coach house she and Goss were renting, and the couple quickly became leaders in the effort. Burroughs, her husband, and other artists including Fred Jones, Charles White, and Archibald Motley Jr. worked with local businessmen to raise the money necessary to purchase the property and organize the renovation.

In 1941, First Lady Eleanor Roosevelt inaugurated the center at a ceremony broadcast on national radio. Burroughs addressed the crowd. â€œNow, in this critical wartime period, we have our own plan for defense; a plan in the defense of culture. The opportunities which we have now, in the coming of the art center, we did not have before. This quickens our determination to see it that this art center, the first of itâ€™s kind on the South Side, and one of the few in the country shall stand and flourish.â€

The SSCAC made Bronzeville a mecca for black artists in Chicago. Even after federal money ceased in the early â€™40s, the center sustained itself, sometimes barely, through the support of patrons. Burroughs said of the energy that went into the center, â€œWe believed that the purpose of art was to record the times. As young black artists, we looked around and recorded in our various media what we saw. It was not from our imagination that we painted slums and ghettos, or sad, hollow-eyed black men, women and children. They were the people around us. We were part of them. They were us.â€ Today the SSCAC is in its 70th year, and is the only remaining arts facility from the WPA days.

Burroughs attended the Art Institute of Chicago, where she received a Bachelor of Fine Arts in 1946 and a Masters in art education in 1948. In her studies she came across the Taller de GrÃ¡fica Popular. The Mexican muralistsâ€™ use of social commentary inspired her work. In 1953, Burroughs travelled to Mexico City to study printmaking and art under Leopoldo MÃ©ndez, a prominent printmaker of the Diego Rivera circle.Â  The influence of Mexican muralists helped her to develop the distinctive style she used in her iconic white-on-black prints of African and American history. The social aims of the Mexican muralists also had an impact on her philosophy of art; throughout her life, Burroughs made art about a world she shared with others. (Read more at The Chicago Weekly). 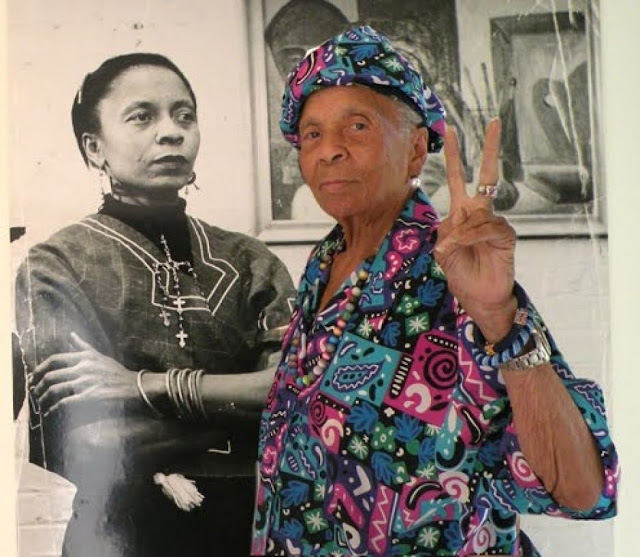