ACRE: I Think I Could Turn And Live With Animals

“I think I could turn and live with animals, they are so placid and self-contain’d,

I stand and look at them long and long…

No one is dissatisfied, no one is demented with the mania of owning things…”

Two weeks isnâ€™t time to make much work. While I was at ACRE this summer as one of several residents, I quickly realized how short, yet how important the time was. I left my life behind with great expectations, all of which were just shy of fulfilled, but what I gained was so much more than what I had hoped. Two weeks, I found, is just enough time to figure out where you are, how you are going to communicate with the people of the life you suddenly left, introduce yourself to 50 strangers, start making work and realize you never what to leave, and then, its over. Its just enough time to take a chance on something, knowing that the end is right around the corner, but that youâ€™ve still made a commitment. Its enough and not enough — in our real lives, two weeks rarely means anything, because it never has a beginning or end, just bleeds from the past and into the future. At a residency, it is a liminal space and time, where all constants are upended without chaos. Any residency worth its salt can make your head spin with new ideas, old ideas seen new, new connections, blown minds, failed pasts and energetic futures yet to fuck up, and ACRE was no different — I am still reeling from the conversations and influence of the people I met there. But no where else is there a way of life that is not separate from art (at least not until the modern day Commercial Gallery gurgled and choked its way out of the murky banks of the Galapagos Island communal bathroom, where hundreds of exotic species of semi aquatic animals did their business). ACRE was about art, as a real and true way of life, that life could not exist without feeling your bare feet in the dirt and sand, your junk in muddy water and your mind in a swirl of whiskey, beer and camp fire, back again early the next morning, up with the rooster, a cup of coffee and a new book from the library to start fresh. 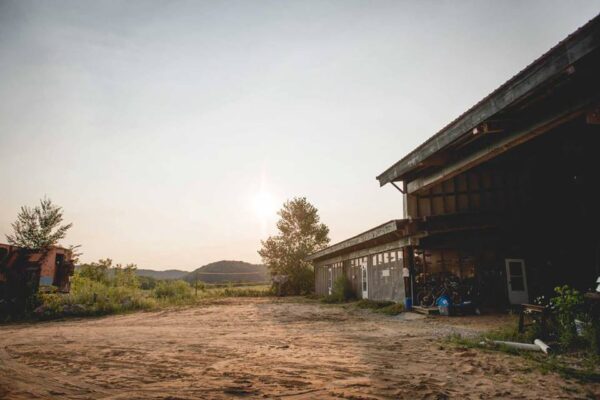 ACRE (Artist Cooperative Residency and Exhibitions) has just completed its fourth year as an artist residency based out of Chicago that occurs for three two week sessions each summer in the heart of the Driftless Region of Wisconsin. (Just a little east of the Mississippi on the bottom part of the state.) Residents utilize a fully staffed Wood shop, Screen printing studio, Recording studio and A/V Cabin while drawing from the sheer open space and beauty of the property. Rotating visiting artists, critics and presenters influence the space along with organic conversations that are a product of an artist bee hive. This model draws from the pedagogy of many graduate programs in art, yet ACRE removes itself from the institution due to its structure. Roughly twenty volunteer artists and musicians organize and run the program, volunteering 6 weeks of their summer (even more while planning the resulting exhibitions of past residents) towards helping others make art. Instead of focusing on their own work they facilitate the work of others.Â  Right here, organization, politics and the board controlled interests typical of an institution are gone out the window, leading into a more natural system where everyone – staff, residents and visiting professionals – are interacting with each other the same. Communal meals, lovingly prepared by a dedicated kitchen staff, are perhaps the keystone of this success. Symbolically, class distinctions of laborer / patron are not just blurred but forgotten.

We started to see that money wasnâ€™t present at ACRE. Yeah, we all paid for the residency and it was understood that it was crucial to everyone getting there. But through generosity and time did everything exist in the space, in an ever growing forgotten area of Wisconsin. At ACRE, money was only needed in the neighboring town of Boscobel, which only sold cheap beer by the 30 pack. (At least, Iâ€™m pretty sure that was their major industry.) Creating a space where financial transactions were discouraged helped separate the real world from this special place. Class distinctions, power struggles and money were nearly eliminated at ACRE. With only two weeks, a society cannot be established, and with the staff insisting on doing all the work involved with operating the residency, a utopian model does not completely apply. (Not that utopia is what they are after.)

Utopia as a reality is impossible to sustain, as human drama will eventually overcome and surmount a perfect existence. Some asshole always finds a way to get his agenda to the top of our concerns. Instead, what may be proposed here is a part time utopia: a form that allows a brief exposure to a utopian system in a format that seems possible. Likewise, the temporal nature of the system actually allows it to thrive, as human nature never gets the chance to ruin it. Able to geographically remove ourselves from city life we could fit within a more fulfilling life in this part time utopia; a utopian model which recognizes the inevitable failure of utopias. In the span of a two week residency, utopia can exist. We started to get it. Hammering it home was Ukiah, a six person artist collective from the Bay Area, who leave their day jobs once a week to build a cabin out of fallen timbers and mud on a ranch property. What does it mean to have a part time or temporary utopia in the context of art? Does this mimic how art is often made, in spurts of spare time, extracted from the pressures of the real world? Could a model of a part time utopia be sustained on a personal level? Is the idea of utopia important to the creation of art? Is its manifestation proof that art can create social change, or merely a distraction from art making? Do you really want to live forever? Alphaville lyrics reprinted without permission?

Utopia CAN happen, maybe only once a week, for two weeks at a time or a few moments, which can be nurtured. Maybe with practice, it will be with you always. For me, utopia is drifting down the Kickapoo River on dollar store inflatables mixing warm Pabst with the river water. Its singing Stevie Nicks and Otis Redding songs with everyone around and not caring who hears you, but that you’re heard. Its playing a four string Fender Squire in an empty grain silo that is better than an amplifier. It is eating a meal with 50 other people each night knowing all the ingredients were carefully and lovingly chosen from the immediate region. It is a constant exchange of ideas, and ideas as commodity, where money is replaced by beer or help with a project. Its understanding why Nick and Phil never wore shoes, and wishing you never bothered to pack any. Where dinner is served overlooking the sunset, and each sunset is better than the last. Every night is a celebration of the work done that day. Even the mosquitoes are contributing to your existence, saying: You Are HERE, as the mall map markers of the rural midwest. Fuck yeah, ACRE: You promised me transcendence in an email, and in real physical sweating pissing reality you delivered it.

SINCERE thanks goes to ALL the amazing staff who made this experience possible, and every resident, who, without being wiser, went along with it. Thank you. Thanks also to Lisa Walcott, for lending a photo of her experience.