Yesterday afternoon I read Virginia Heffernan’s essay, “Let Them Eat Tweets: Why Twitter is a trap,” in the New York Times Magazine, and so interesting did I find it that for a good part of this morning and afternoon I bounced around the internet trying to find a podcast or YouTube video or any other web-style recording of Bruce Sterling’s speech at this year’s South by Southwest Interactive conference so I could listen to his words in context–to no freakin’ avail, I might add.

Heffernan wrote about feeling a certain sense of personal status anxiety ever since she heard Sterling (whose rants are an annual highlight of SXSW Interactive) declare at this year’s conference that, as Heffernan paraphrased it,

“the clearest symbol of poverty is dependence on ‘connections’ like the Internet, Skype and texting. ‘Poor folk love their cellphones!’ (Sterling) said.”

Or in other words, as “a friend” quoted in Heffernan’s essay put it, “connectivity is poverty.” Heffernan elaborates on Sterling’s ideas as follows:

“Only the poor – defined broadly as those without better options – are obsessed with their connections. Anyone with a strong soul or a fat wallet turns his ringer off for good and cultivates private gardens that keep the hectic Web far away. The man of leisure, Sterling suggested, savors solitude, or intimacy with friends, presumably surrounded by books and film and paintings and wine and vinyl – original things that stay where they are and cannot be copied and corrupted and shot around the globe with a few clicks of a keyboard.”

Although I’ve yet to find a recording or even a transcript of Sterling’s talk, I did find one blog entry that provided some partial notes on the beginning of the speech (in which Sterling apparently munched on chips and cookies to mirror back what he saw as the inattentive twittering (m)asses in his audience), and that of another blogger named Jim Groom, whose Bavatuesdays blog was referenced in the print version of Heffernan’s article (I think he might have been the author of the “connectivity is poverty” quote, based on the header of his below-referenced blog post), and who summarized Sterling’s argument thusly:

Bruce Sterling’s rant was right on. I was hoping to listen to it again before I talked about it in more detail. In fact, I’ll have to do that cause I can only recall bits and pieces, but there was a point in his stream of thought that really impressed me (well, besides his discussion of the future of publishing as epitomized by survivalist bookstores like Brave New Books-which I loved). He went off about how much we had miscalculated the digital divide theories of the 90s that were to define the digital world of haves and have-nots by whether they were or weren’t connected. It seemed logical to assume that the impoverished would not be connected, whereas the rich would be decadently consuming all the bandwidth.

Well, as he pointed out, it didn’t quite work out that way, connectivity became cheap with cellphones, and he comically noted that “poor folk love their cellphones!” What’s happening is that this increased dependence upon connectivity, rather than being some kind of indicator of privilege, is actually a sign of our increased impoverishment. The fact is that the wealthy are those who can afford not to be connected, not to be pimping their “online brand” so shamelessly, not twittering their asses off at all hours of the day for a quick networking fix.

Note that Groom couldn’t get his hands on Sterling’s talk either, although at least he got to see it in person before writing about it.

Continuing my own search for the elusive Bruce talk brought me to the very, very cool sketchnotes of one Mike Rohde.  Here is a page from Rohde’s sketchnotes on the talk in question: 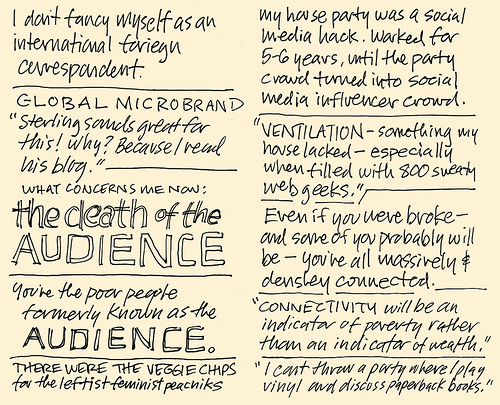 What Rohde is doing is partly a tweak on Twitter (he even live sketchnoted during one panel) but look at the difference — the drawing/handmade font aspect of Rohde’s notes make it seem so friendly and, well, readable, but also human and therefore subjective. (You can find all of Rohde’s sketchnotes on Sterling’s talk (they’re sketchnotes 51-56) here, and sketchnotes for the entire SXSW interactive conference here.)

So, from the high of discovering Rohde’s hand-written sketchnotes I descended to the low of Twitter itself, to see what would come up if I searched “Bruce Sterling.” Ooh, now this is kind of interesting. Lots of initial reaction to the Heffernan piece, many seem to be wrongly assuming that the article was written by Sterling himself. Here are a few examples of Tweets related specifically to the Heffernan piece and/or the talk itself (make sure to follow the link to Dan’s blog given in the first Tweet – it gets a comment that’s apparently from Sterling himself, criticizing the blogger for critiquing a talk he didn’t actually attend):

Argh, I didn’t realize you can only search the past 7 days of Twitter, so recent chatter is all I get, that sucks. So no Tweet-notes on Sterling’s talk, just some quick (and often ill-informed) reactions to the “Poor folks love their cellphones!” quote from Heffernan’s piece.

And last, via Google, I come up with this little sketch, from what I think may be Bruce Sterling’s own flickr stream, though I’m not really sure. The caption under the photo reads: “In Austin, even the 12-year-olds get it about Twitter.”

So what does this all mean? Heck if I know. But I do find it incredibly ironic and stupid and maybe brilliant–but maybe not so much–that Sterling gave this talked-about talk at one of the biggest freaking INTERACTIVE conferences in the country, he’s one of the cultural cognoscenti whose opinion, on certain issues anyway, drives the discourse forward. He puts ideas on people’s agendas, makes writers like Heffernan rethink their assumptions and publicly question them, etc. But I can’t even find audio or video of his talk anywhere online that would allow me to form my *own* opinion about what he said firsthand (well, a recording would make it sorta second-hand, but you know what I mean). As a result I’m forced to depend on other people’s truncated versions, reliable though they may at first appear. Maybe SXSW will eventually post a podcast of Sterling’s 2009 talk, although the conference took place over a month ago, which is an eternity in internet time. Even I probably won’t care about it anymore by the time they post it. Who knows, maybe Sterling didn’t want to give them permission to reproduce his talk in the first place, in an effort to preserve some semblance of ‘the old days’ of which he is said to have spoken.  From live talk to magazine editorializing to blogger’s notes to Tweets…social networking isn’t worth much if all it comes down to is gossip. I want access to the real stuff, not just everyone’s opinion, commentary and tweets about it.  In other words, if anyone finds a link to Sterling’s speech at the 2009 SXSW Interactive conference, please let me know! Thank you.