The Nostalgia for Paradise is The Paradigm of Time

I’m riding along in the most conspicuous of vehicles in a place that I would like to think knows me. On every corner I pass, I see a thousand younger faces–dead and alive. I roll through my memories like I’m watching an 8mm film in an attic–shrouded in an old blanket to stave off the chill of remembering.

I’m riding along in the most conspicuous of vehicles. I ramble past fields full of children chasing balls and kicking up dust. They punch through the screen of their own creation with smiling faces–naive and careless. I hear the whistles blowing and the indistinct noise of a bustling park on a summer day–the mill from which expectations are forged.

I’m riding along in the most conspicuous of vehicles through a paradise lost in a purposeful process of becoming. I drive past the dream of what I once possessed–to recover what was lost in an attempt to return to innocence–to return to an original state of utopia.

As the boxes full of yesterday are unpacked today, a pattern of experience emerges. Named phenomena behave syntactically–orderly. To use the words “paradise lost” is to engage a literal subject of literary history, as it also describes–metaphorically–an inevitable characteristic of the human condition. It is to recall the bible. It is to recall the garden of eden and to locate the vernacular sense of lost youth and innocence. It is to call upon The Tale of the Merchants at Sea, in the Buddhist tradition, to describe our relationship to temptation. To morality. To the life of a servant connected to a larger, mysterious whole. It is to recant the story of Milton’s pioneer in Paradise Lost and his return to sacred territory. It is to rouse John Bunyan’s A Pilgrim’s Progress, as the locus of religious dissent. To engage this history is to engage the explorer archetype and all its subsequent manifestations–wherein this syntactic legacy is used to perpetuate the myth of the wayfarer that has fallen from the garden and must struggle to return as a requisite in the soul’s journey home. The first event in the recorded narrative of human history is an expression of nostalgia. It is a story of consequence. Cause and effect. Of the necessity for a compass. Of the idea of being lost. It is the origin of mythology and the steadying metaphor for purpose. It is no surprise that the boxes of yesterday are filled with the order of today. The nostalgia for paradise is the paradigm of time.

The paradigm of time is a complex phenomena with roots firmly indentured in religious mythologies whose records begin with a primordial event. Within the boundaries of a typical visual articulation of the history of time–most often a time “line” contained by the edges of a sheet of paper or screen–is an inferred infinity. It is a rulered line. It is segmented by handsome dots representing historical waypoints in an authored tale. Infinity lies to the right of the page–directionally charted in our learned reading matrix and reaffirmed in our cartesian mathematics as the x-axis upon which history can be plotted. Markers to the left of the y-axis are negatively charged as pre-history–as a time in which science and religion are the only sanctioned speculators–and are valued as a necessary means to the nexus of now. The current potential of pre-history is not only its worth but it is also the extent of its conception.

Within this Newtonian framework, time is local. It is unidirectional. It is contained within place and space. It is an objective fact of life, built into reality and out of reality. The arrow of time steers the eyes and we imagine it living on beyond the material boundaries of the graph as we imagine our soul living beyond our physical expiration. This faith in time is concurrent with, and a result of, our faith in the myths of a timeless paradise.

These fantasies are easily recognizable in the context of ancient rituals and religion. However, legitimation, redemption, and nostalgia for a lost paradise are also familiar to modern contexts that are imperfectly disguised from their origins. A contemporary vision of lost paradise is perpetuated in a yearning for “simpler” times which were somehow more “real.” Less digital. More tangible. In that distant perfection is a belief that there existed a more human version of ourselves. This attitude that permeates today is a condition amplified through World War II and it survives in plain sight. It is everywhere. Patriarchy was the constitution. Men were real men. Women knew their role and embraced it. There was little push back. People collectively understood the severity of the possibility of a global catastrophe. They simply assumed the roles designated to them. Post-War paradise is an idea conjured by culture–it subjugates and suppresses reality by creating heroes and legends. It is the modern mythical pedestal upon which our culture is wavering. 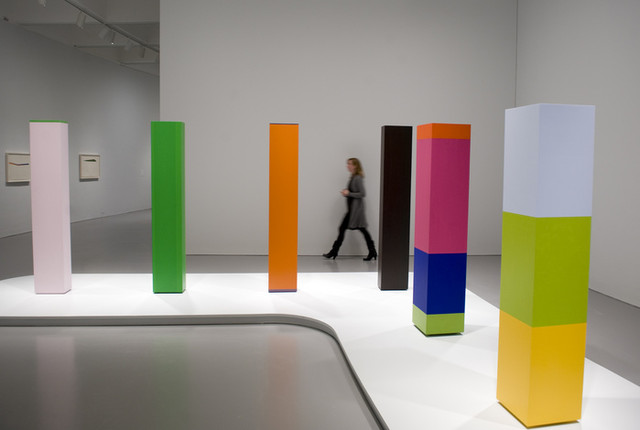 Anne Truitt, from “Perception and Reflection at the Hirshhorn Museum 2009

In Anne Truitt’s, Daybook: The Journal of an Artist,  her entry from November 25, 1974 imbues the myth of  “simpler” times and exposes those times as the antithesis to idyllic circumstance:

Some part of my generation’s bafflement with our offspring arises, it occurs to me, from our involvement in the Second World War. Catapulted out of our playgrounds into disaster, we were deprived of choices. A vast majority of the men and many of the women spilled into the military; those of us who remained civilians were equally caught up in the country’s effort. We had no time to experiment with our lives. We simply had to lay them on the line. And we didn’t dare plan beyond the war, since we simply had to wait and see who would survive. So when we watch our children darting from flower to flower, we feel anxious, not having behind us a comparable period of youthful ranginess. There is, perhaps, a kind of jealousy too. We had to be so serious so young. And when we sorted matters out after the war, we were older, too old to play, and secretly damaged. We set about the business of living as solemnly as we tried to live in the light of our willingness to give them up.

Conditions of the present never present us with sufficient favorable conditions to be satisfied–we look to the past because the future is indiscernible. Truitt explored time the way all artists explore time-through self-examination. Self-examination through ritual. She attempted to re-create herself and her experience within a complex set of abstract geometry that could always remain contemporary through the viewer’s experience of the object. It was her contention that the art is also the experience, and that it evolves, mutates, and correlates with every individual exchange.

Truitt’s work enters the realm of the primordial occurrence by asserting itself as an immortal object capable of evolution. Her process represents a ritual of reenacting the behaviors of the gods, ancestors, heroes, and legends who created the world as she knew it, through a return to the eternal and the escape of the uncertainties of a mortal existence.

As the nostalgia for a lost paradise penetrates our understanding of the world, we look to ritual to provide a prototype for returning. Ritual can furnish a model for developing a new paradise, and it is the medium of access for understanding existing models. Art is ritual. Passing through the gates of their studio, the artist, finds themselves on sacred ground. They are in a place cut off from the common land, and dedicated to developing their ideas. It is consecrated by work. The work manifests in objects meant to articulate their visions of paradisiacal projections which have the ability to accumulate and precipitate cultural change. 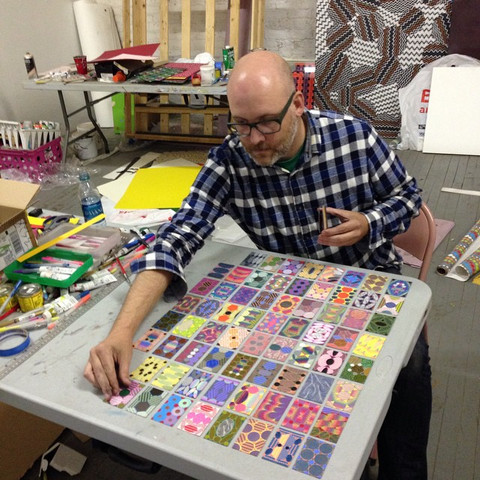 Geoffrey Todd Smith in his studio

The accumulation of culture through ritual practice is the artist acting as a filter. They dissect, discard, reuse, and renew what is calculated as central to their speculations of utopia. Chicago artist, Geoffrey Todd Smith, is a prime example of an artist who uses his practice to induce introspection, which manifests materially as abstract paintings. His titles often reflect his accumulation of shared experience and an insight into the immediacy of his process, while the images conjure a methodology for achieving the internal gaze. His most recent project was executed under a set of rigid parameters that maintained a control of scale, considered material applications, and required an immense dedication of time.

Smith’s 100 3” x 2” paintings–for me–define the idea of a ritual practice that utilizes art as a medium for evoking individually conceived ideas of perfection that will be collectively considered through a learned aesthetic framework. This framework seems to be the conduit that correlates his paradise with the rest of the world.

Lille Carré, another Chicago artist, in a recent show at Western Exhibitions titled The Pleasure of Getting Lost, presents another variation of longing–of being lost in her own maze of ideas. In the exhibition, Carré presents drawings, a book, and animations as her diagrams for  solving her self-induced dilemmas. What is of particular interest to me, in this context, is Carré’s drawings of mazes. The maze drawings were shown in juxtaposition to symmetrical drawings of the solutions to the maze. These complex puzzles and their solutions seemed to project a metaphor for describing the artistic process, but they also seemed to call into question what it means to be lost. 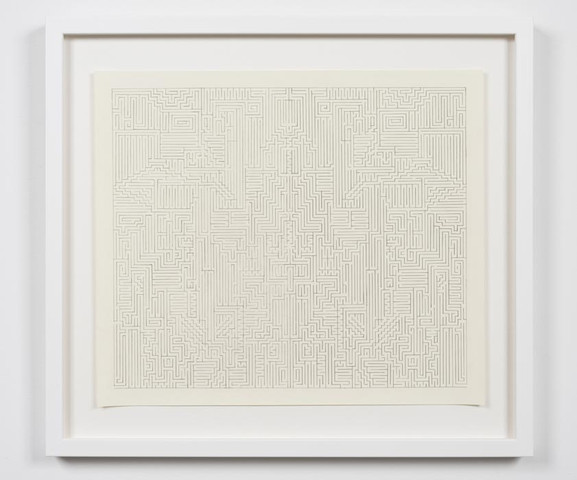 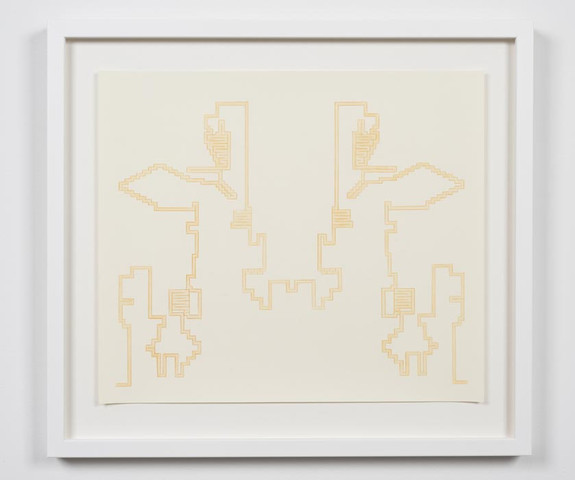 To be lost means that there is an alternative–that there is a physical or mental state that exists and that that space can be defined within a set of known quantity or quality. In the end, it seems, that Carré’s ability to convey her experience or idea of being lost is not contingent upon providing a visual solution to the maze, but rather her mastering of a visual language. In this way, her articulation of time describes our intimate connection to each other while accepting that infinite distances continue to exist in the space between. 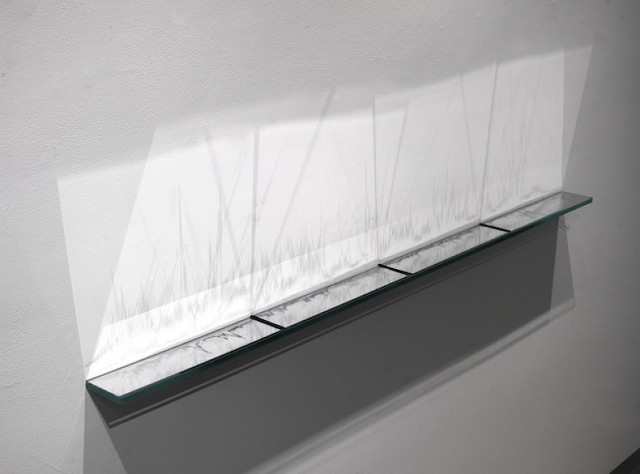 Deb Todd Wheeler, Sub/Sound/Scream 2014 Half a soundwave of an underwater recording of a scream on mirror, plexi glass, brass, and steel 60 x 3.5 x 3 inches

Boston based artist Deb Todd Wheeler in a recent exhibition at the Miller Yezerski Gallery titled, …in the atmospheres, deployed a multitude of media to address her ideas of pulsating phenomena that project into the atmosphere and inevitably resonate a permanence within the environment. In her work, Sub/Sound/Scream, Wheeler recorded the sound of a scream underwater, etched the pattern onto a mirror, and the reflection is projected onto the wall of the gallery. 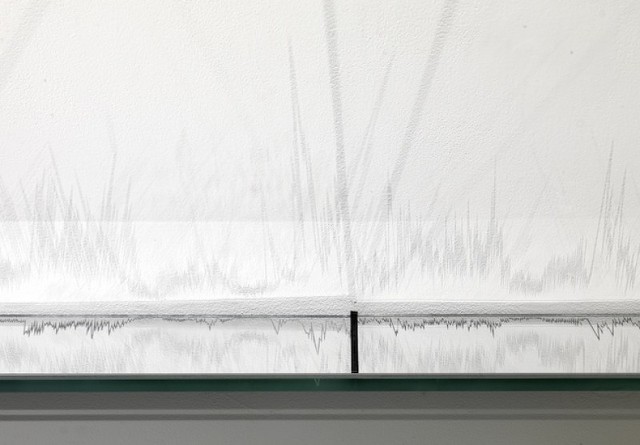 Deb Todd Wheeler, Sub/Sound/Scream 2014 Half a soundwave of an underwater recording of a scream on mirror, plexi glass, brass, and steel 60 x 3.5 x 3 inches

To me this work is an ideal representation of what a visual description of time should look like–peaks and valleys sporadically displaced along a linear pathway–erratic and full of life. The scream is at once a dissatisfaction with the present as it is a demarcation of a moment in which the future is altered. Wheeler’s articulation of the scream resembles the heartbeat– a measurement of time, as well as, the rationale for measuring time. Without breath there is no life. Without life, time is of no significance.

On the waves of human pulsation, I’m riding along in the most conspicuous of vehicles. We all are.