My wife and sometime collaborator Stephanie Burke and I recently completed a 140-mile walk as a perforance piece called “Walking to Mordor.”  The walk was based on an Easter egg introduced in Google Maps three years ago:  if you asked it for walking directions from “The Shire” to “Mordor,” instead of the usual “Walking directions are in beta” warning, a pop up announced, “Caution:  One Does Not Simply Walk Into Mordor.”  The line is Boromir’s, from The Fellowship of the Ring.  Ignoring his naysaying, the two hobbits Sam and Frodo proceed to do exactly that. 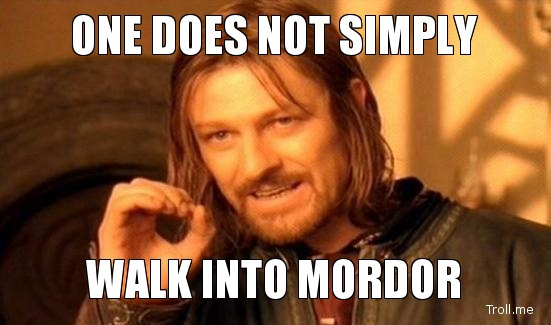 The line, as spoken in the 2001 film, spawned an Internet meme which consisted of a still image of Boromir, hand in mid gesture, coupled with a line of text reading, “One does not simply…” followed by whatever the author wished to decry.  Instances date back to at least 2004.  In 2011, Google Maps joined the party by adding the Easter egg to their walking directions.  Along with the warning, however, Google actually did provide a map and directions, from a restaurant called “The Shire,” in Chehalis, Washington, to a tattoo shop called “Mordor Tattoo,” in Arlington, Washington, 138 miles away.

When I showed Stephanie the joke, she mentioned that, coincidentally, she has family in Chehalis, and had spent some time there growing up.  It didn’t take long for us to decide that it would be fun, and funny, to take Google Maps’ directions at face value, and walk the route.  Almost immediately thereafter we realized we had to commemorate the journey by getting tattoos at Mordor, and that the tattoos should be of the map of the route.  We documented the project with a series of photographs called “Instagram vs. Holga.”  Stephanie, a trained photographer, shot on the cult classic crappy medium format film camera, while I, with  no more than a couple of undergraduate photography classes under my belt, used my phone’s camera and the everyman’s favorite app.

As has happened with more than one previous project, we didn’t set out to make art.  Our process is more often that we have an idea for something we’d like to do, and then, almost against our wills, we realize that it is starting to look quite a bit like art.  Or at least like things that other people call art.  And certainly, going for a long walk has quite a history as a form of performance art.  It has spawned books, blogs, and even a society.  Well-known examples include Francis Alÿs,Regina José Galindo, Simon Faithfull.

The history of walking as a form of performance art can never be severed from its history as a form of protest.  Galindo’s 2003 walk from the Congress of Guatemala to the National Palace, her feet dipped in blood to leave red footprints, was intended as a protest against Guatemala’s former dictator, José Efraín Ríos Montt.  Montt had formerly led a military regime known for widespread human rights abuses, and at the time of Galindo’s performance was running for President in a democratic election.

Not all of those who have walked in protest have identified as artists.  Perhaps the most famous example, internationally, is Ghandi’s Salt March or Salt Satyagraha.  By directly and pointedly disobeying a British law against domestic salt production in India (forcing Indians to buy imported British salt), the march essentially started what became the international Civil Disobedience Movement.

Inspired by Ghandi, A. Phillip Randolph and Bayard Rustin organized the 1963 March on Washington for Jobs and Freedom.  The march itself covered barely more than a mile, from the Washington Monument to the Lincoln Memorial, though the 250,000 participants (60,000 of them white) had traveled from much farther away by bus, rail, and plane.  Some spent 20 or more hours on buses traveling as far as 750 miles.  Two years later, voting rights activists marched 54 miles, from Selma, Alabama to the state capitol in Montgomery.  The Selma to Mongomery marches are commemorated by a National Historic Trail.

America’s racial history (obviously still in the making) continues to inspire performance artists.  In 2009 I reviewed Meg Onli’s Underground Railroad project for Art Talk Chicago.  (Five years later, her work holds up better than my early efforts at writing.)  Presented as part of Twelve Galleries Project and curated by Jamilee Polson (who is also this blog’s managing editor), Onli’s project consisted of her retracing, on foot, the route of the Underground Railroad: a 440-mile journey, in Meg’s words, “in search of blackness.”

Exploring another form of blackness entirely, Chicago-based curator Amelia Ishmael co-edits Helvete, a journal of Black Metal theory, in the first issue of which was published David Prescott-Steed’s “Frostbite On My Feet:  Representations of Walking In Black Metal Visual Culture.”  (If you’d like to read the article for yourself, the entire journal is presented for free, as a downloadable PDF, at the above link.  A print edition, also available, is well worth the price.)  “Frostbite” tracks a few reference points linking walking with Black Metal culture.  Principally, it finds the common ground between a grueling trek into the Norwegian tundra, led by Gaahl (former Gorgoroth frontman), and the author’s own experience walking the mundane streets of an Australian metropolis while listening to Burzum:

In this case, “blackened walking” is seen to be less about the activity of walking itself and more about the circumstances under which one can move through space—walking not just for the sake of exercise, pleasure, or getting to the shops on time. With the modern world (invested in trains, planes, and automobiles), the slow, simplicity of a walk (Walking? How pedestrian!) seems to have lost some of its value. However, walking is capable of bringing one’s focus back to a fundamental question of what a body physically needs to do in order to transition through, and therefore go on, in the world. Perhaps mourning the forgetting of the existential significance of walking, “blackened walking” pays respects to walking as the chance to explore self-determination and a readiness for the unknown.

We hadn’t conceived of the “Walking To Mordor” project initially in terms of its connection to Black Metal, but as we walked, Prescott-Steed’s phrase “blackened walking” echoed in my mind.  The connection, however ephemeral, clarified itself in my mind as I looked over Tolkien’s maps of Middle Earth, and researched his languages.  Two of the bands mentioned in “Frostbite” take their names from Tolkien’s writing.  Gorgoroth is an arid plateau in the northwest corner of Mordor, surrounding Mount Doom; the name comes from Sindarin (the Gray Elven tongue) and means “dreadful horror.”  The name of another band, Burzum, means “darkness” in the Black Speech of Mordor.

Far from the tradition of protest marches, whether as performance art or otherwise, “Walking To Mordor” was in some was a playful exploration of what happens when a joke is taken 138 miles too far.  A linguist became an author.  His book became a movie.  The movie spawned a joke.  The joke became a meme.  The meme became an Easter Egg embedded in the principal means by which Americans today naviage their world.  With every breath spitting in the face of Alfred Korzybski, originator of the phrase, “the map is not the territory,” most of us today confuse a glance at Google Maps, followed by a drive in the car, with exploration.    We think of distances first in minutes of driving, or hours of flight.  The landmarks we note are gas stations and Starbucks locations.  Google Maps has become the average person’s understanding of the world.  Moreover, our culture is becoming one of remakes and mashups.  References have taken the place of wit:  “that’s clever” has been replaced with “I have heard that before.”  Tolkien has been reduced, in the public imagination, to the origin of nerd-chic Internet memes, and we have tried in our way to be true to his work by dragging a piece of derivative humor, kicking and screaming, into meatspace.