“Four score and seven years ago,” is how my mind tells me to start every essay I sit down to write. This is my memory at work. I remember the tone of the words that follow in Lincoln’s famous Gettysburg Address. I remember the cadence. I remember that it was taught as a triumph. As a novel speech from a novel man. I can see the address in a block quote in a semi-thick American history textbook. It was highlighted in blue with Lincoln’s portrait in the top right corner of the elongated box, at the right side of the page, and at the end of a chapter covering the Civil War. I was given the task of memorizing the words and reciting it to my classmates, but all that remains are the first words. The image of the words. The feeling of time passed.

When I am staring beyond my computer screen–perhaps out the window–searching for the right words to begin with, Lincoln’s words make up the phrase that my mind tells me to jot down. It seems as much a method of mocking myself for my own distrust in my ideas and the effectiveness of recording them in this way,  as it is a natural beginning. A way to set the tone. A point of abstraction. Only now am I realizing that the attention I have paid to it–in this introduction–may either eradicate its insistence in my writing regiment, or forever disturb any ingenuity it may have had. Today, the words are there and I’m responding to them.

I recently admitted to a habit of writing my articles the day before the deadline, and since then, I have been stewing over the probability of procrastination. I’ve been questioning my routine and routinely questioning the validity of the way I think, rationalize, and project my ideas. I am forever convincing myself that my ideas are valuable and that the time I have spent Not preparing this article, has been used to decompress the information that has consumed me in the month prior. I am often successful in my persuasion, however, there also exists an acute awareness that convincing is essential. Therein lies the paradox. Therein lies the necessity for crackerjack acumen–or the ability to form enterprise with intuition and memory despite one’s rational concerns that may encourage otherwise.

I’m constantly waiting for a bolt of lightning to electrify my thoughts–to send a signal from brain to stem which results in an action–in this case writing. Molly Zuckerman-Hartung revealed to me the genesis of the lightening bolt as Hans Hartung’s signature. He believed the lightning bolt was especially for him, and that its form (the zig-zag) represented spontaneity in a way that was true to the idea of what spontaneous action might look like–erratic pivot points descending from above a surface it will eventually contact. It will be surrounded by other bolts (they come in storms), and will offer the conscience a choice at every zig and every zag, eventually determining where the bolt will be grounded.

Last week I was struck at Devening Projects by the drawings of Monika Bartholomé. Before reading any literature about the work, I felt the drawings had allowed me to access very intimate spaces that were not only intimate in their portrayal of domestic interiors. Though there is ample information to suggest that these drawings are simple representations of the artist’s habitation, a closer look reveals imaginative brushwork, a keen understanding of light, and most importantly, an uncorrupted investigation of memory. 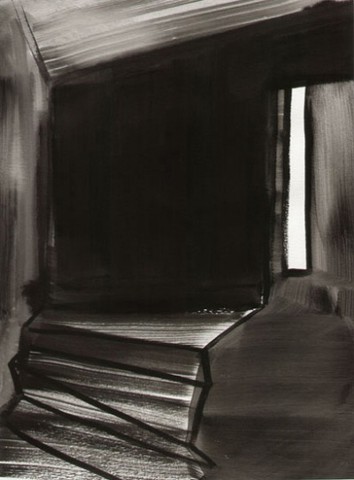 My memory of the Gettysburg Address and the application of it,  is a corrupted memory in the way it has manifested in this piece of writing. It was stimuli that has since been captured, dismembered, and postulated as metaphoric reasoning. We reason from metaphors in our attempts to make sense of ourselves, our actions, other people, and the physical world around us. We engage in metaphoric thought processes simply because much of our experience is metaphorically structured, and it is from our experiences that we reason. It is through this type of reasoning that I have abstracted more rigid or formal strains of logical connections to perpetuate my ideas, and to understand Monika Bartholomé’s drawings through my own narrow framing device.

When I visited Devening Projects, Bartholomé’s drawings had the zigs and the zags of the lightning bolts. I could see choices being made. I could see the movement of the brushes as well as her hand, and I felt a connection to the impulses that drove those decisions. I envisioned the way the  brushes moved across the drawing surface and quickly made jagged sloping turns to radiate in a resting place. In each conglomeration of intuitive marks, a space would emerge. These spaces are ultimately derived from memory, but are defined by the hand’s memory rather than metaphoric representations of existing places. The work seemed to be about the impulse to move the hand from one place to the next using a tool that makes a mark on paper and leaves a trace that creates a dilemma for the maker. This dilemma and the response to it, is how her images are made. Everything else is corruptible. Every attempt to create, rather than respond, would be a false step in the process of creation. 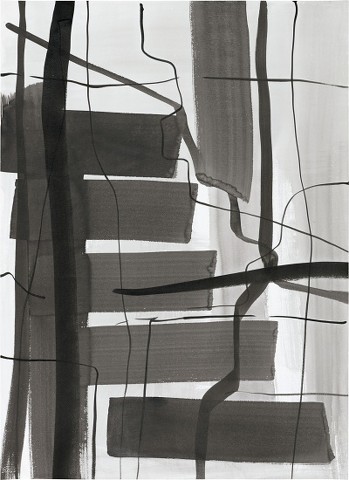 Looking at the drawings that materialize as living spaces, one can see how the hand’s memory is as familiar as the mind’s. Bartholomé makes repetitive decisions in similar situations. When she reaches an edge, one can see the pressure applied to the brush gradually subside. As the hand recognizes its place in space, it makes adjustments to the tool. The tool, in turn, responds with a trace of that impulse–a mark of muscle memory and the basis for the next drawing move. 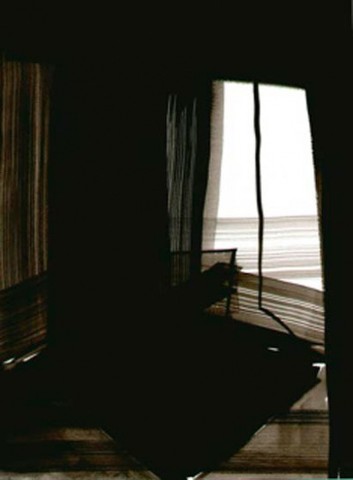 Bartholomé has an incredibly efficient economy in her mark-making strategies. However intuitive it may be, it is also learned. The labor and reduction required to arrive at such simple, yet elegant, descriptions of space doesn’t occur on a whim. In her essay, “The Eyes Following the Hand,” Bartholomé describes the marks she makes: “…they do condense into pictorial language by means of abstract abbreviation…The lines bring something into the open that I once perceived, for the most part unconsciously and incidentally, and that is recorded here in whatever form. To be able to get what has been recorded, to the connections that the perceived thing entered into, and then create a place for it and be surprised by it–this is what interests me, among other things, in the medium of drawing.”

Bartholomé’s drawings seem to posit that metaphor is a pervasive, yet indispensable structure of reasoning that calls into question some deeply rooted views about the nature of knowledge and understanding. This balancing act is at the heart of her work. The artist is both visible and absent. The spaces are both intimate and ordinary. Recognizable and abstract. Reductive and chock full of imagery. These drawings are easy to get lost in, but only a few steps backwards will bring your eyes back to a reasonable place.

I’m at that place of reason right now after having written this piece. I’m standing in a place that is far enough from the image I have created, and it seems to make plenty of sense–at least to me. My distortions of Baratholomé’s work are my attempt to regurgitate her production schematic–letting memory serve as the metaphor that describes the process.