Integrating that material into our experience with lleom

I met Roberto Cruz Arzabal, Cinthya García Leyva, and Susana González Aktories at a corner café in Coyoacan, a neighborhood adjacent to UNAM. Cruz, García, and González are three of six members of the laboratory of extended literature and other materialities (lleom), a roving and expansive group that presents walks, talks, readings, exhibitions, and other events around emergent forms of writing. Although I am usually wary of talking about art in cafes, I was encouraged by what I perceived as similarities between this café and the café I talked to Renzo Martens in back in April. I ordered a matcha cake, which for some reason I did not expect to be giant and neon green. I began by asking what lleom is.

*This interview was conducted in English. 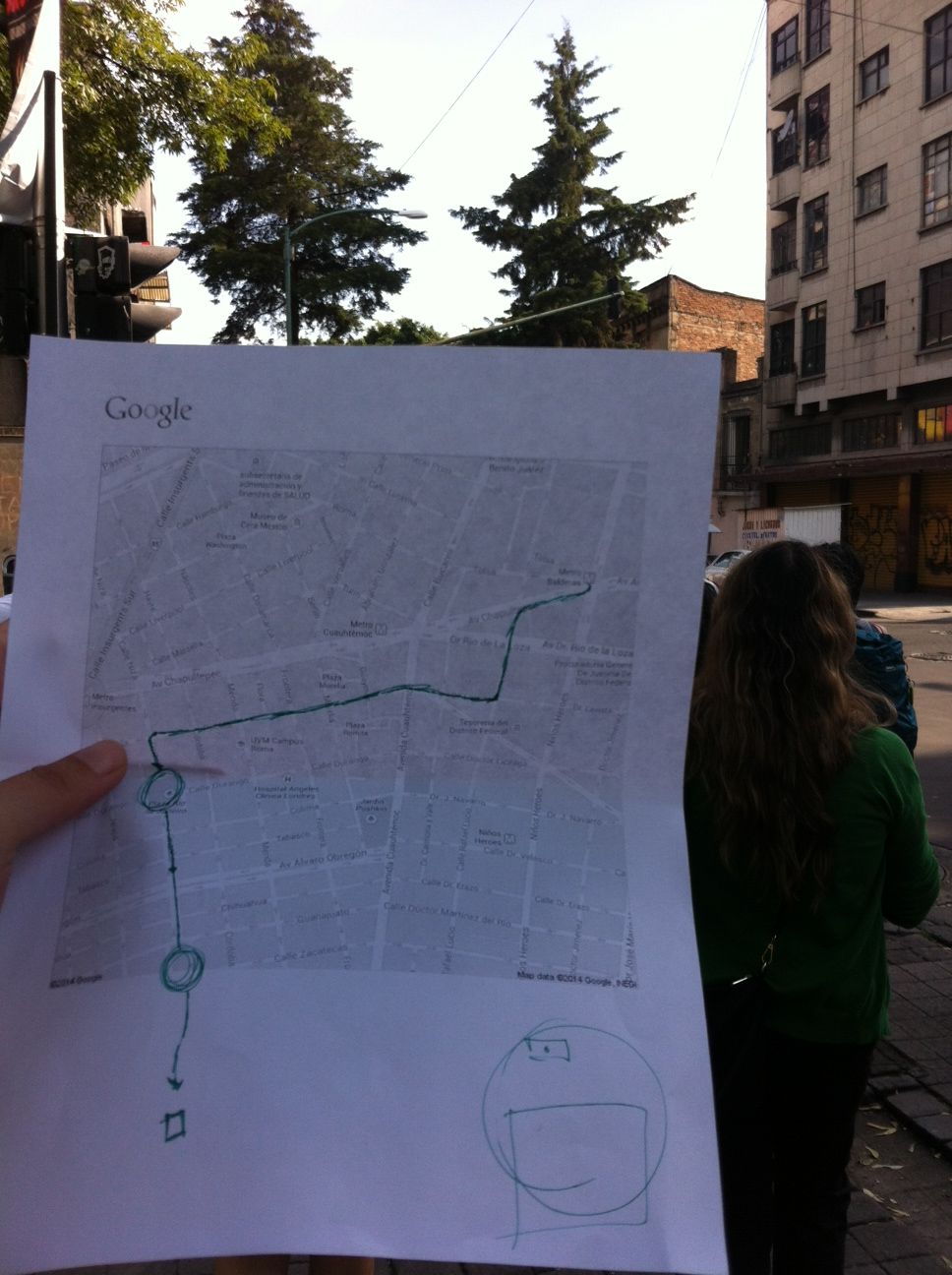 CGL: It’s a space of experimentation. We met in school, in the Faculty of Philosophy and Letters at UNAM, and we share some similar questions about literature in general: how literature literally expands its forms, its communications, and its relations. We try to exercise these expansions, and we try to invite people to experiment with us. We are developing research, seminars, sound walks, very different ways of approaching experimental literature.

RCA: lleom is not a physical space. It’s a cognitive space with cognitive experiments. We want to try to new concepts and new approaches, both to the old media, to the old literature, as well as to the new literature, the new ways and territories in which literature is operating in this moment.

JW: What do you mean by the new literature?

SGA: Emergent ways of creation, mainly. “New” is a difficult term to define.

RCA: Yes. What is emerging may not be new. We are in a very wide space, which I think allows us to look for other encounters between artists, writers, web artists, and even traditional, or almost-traditional, poets.

SGA: Vocal traditions, for instance. Not only oral ways of communication in ancient cultures, but also in contemporary ways, which often include new technologies. Sound poetry and all of its different derivations is fascinating. Our viewpoint starts from the avant-garde movements and comes back to almost yesterday. We’re looking around at new publications and trying to discuss how they are evolving. Are they actually new? What is “new”? What does recreation mean? Of course, we get back to the figure of the Author, of the Original, of how we read. The distinction between reading out loud and singing, the distinction between imagining the text in silence and reading it in silence: these are different materialities which lead you to a different literary object. The approach, the theoretical approach at least, has to change.

RCA: The traditional approach in academia is the text as a text. We don’t see the text just as a text; we see it in an oral way, in a printed way, in a digital way. We are trying to understand the text as a process, the book as a process, the book as an interface for the text. We also have a few studies about the social context of the text: publishing, the relation between writers and other artists. That’s another materiality, the social materiality of literature. We can think the text before or after it is published, before or after it is reviewed or made an object for critical discussion. These are conditions of existence for the text. We don’t read a text. We read a material and we integrate that material into our experience—in our living experience, in our aesthetic experience.

JW: Why “laboratory,” and not workshop or thinktank or any of those other words?

RCA: Because workshop, at least in Mexico, has two connotations. One is the handmade, as in crafts; but also it’s the way in which writers work on writing, in a very professional, material way. We are trying to get out of this idea and to think in a more cognitive space, to be able to really experiment with ideas. We don’t work with material; we work more with ideas and experiments.

CGL: A laboratory also allows for a free way of studying. We try to ask questions about academic work: how we approach academic work, what we understand as academic work.

SGA: Literary matters or other cultural matters are always discussed as things that have already passed. Concluded matters: that’s what makes them objective. Very few people have the courage—I don’t know if it’s courage, but maybe it is—to approach things that are in process, because you can’t know what’s going to come out of them. Here in Mexico, and everywhere, the tendency is to work with writers who have already died. It is much safer to work with dead writers than to work with writers who are still alive. We are letting ourselves be creative a little bit, not just a researchers who stand beside the matter itself, who are always a third element in all the processes and equations, but rather allowing ourselves to experience some kind of creative situation ourselves. It gives us a whole perspective. This is what is generally lacking, at least here in Mexico.

JW: Is lleom this a goal-oriented organization? Is it reaching towards some kind of conclusion or is it fanning out?

SGA: I have my own personal answer for this. We have all these different interests: people decide they want to pursue one thing or another, and we support them. I hope that we, as intellectuals, as an academic group, do not always recreate this same kind of discourse that is always saying that literature is not important to society, that culture is in the periphery of things. I truly believe that culture, literature, and literary studies as such should be considered as the center of many other things that are not only literary, including sociopolitical matters.

JW: What is important if culture is not?

RCL: Money, the economy, the government, the traditional political sphere, traditional media, pop stars, and so on. We are living in a global country, in a global space. We are in an ideological space, in the center of society. If we don’t think that, we are lying to ourselves. That’s the political importance of our work. In the center of the laboratory there are two main interests. One is objects and materiality; the other is the experience and the experience as a process. The experience can make us see reality—the arts, the political—in another way. If we see the experience and the objects, we can think not only the traditional materiality of the book, the poem, but also the way in which the society is thinking itself around those objects right now.

JW: I noticed on your website that one of the many interests of lleom is “post-Internet.” Is that what you mean? The book after the Internet?

SGA: The question is actually the physical object: the Internet can make you make decisions more consciously. If you decide to make a book object today, it doesn’t mean the same thing as it did at the beginning of the twentieth century, even if it is almost the same. That’s what makes it so fascinating and so exuberant. The last talk, with Leonardo [Valencia, a Ecuadorian author], was about this. He had had the experience of making a digital book, but he realized after this experience that he wanted to turn back to a more conscious way of making, writing, and editing physical books. That gives it a whole new meaning, a whole new experience of writing and of reading.

JW: It seems to me the most important thing we can do as academics or artists or anything is to make people aware that they are making a decision. What is this book? Where did it come from? Where was it printed? What was it printed on? These are all questions we should be asking. Where does this paper come from? The answers aren’t always necessarily good ones, or are often horrifying, but it’s important to ask the question and to reconcile yourself to the answer, somehow.

[A server delivers two Americanos, one for Jacob, one for Cinthya.]

JW: When we sat down, I was saying that part of the reason I moved to Mexico City was that I kept on hearing, from other expats, from other foreigners living in Mexico or who had visited Mexico, that it is such an exciting place, that there is so much happening here, and your response was, “yeah, I’ve been hearing that a lot.” Is it true? As people who live in Mexico City, who have been living in Mexico City, is now exciting? Are things different than they were 10 years ago, for instance?

SGA: Definitely. For me, yes. I see it almost in the everyday way of life. Things are changing—not always in a positive way, but often in a positive way. In my case, having come back from Spain just now, I again realized, while talking to my friends, and while having had the opportunity to stay actually abroad—my mother is German, I studied in Germany and then got my doctorate degree in Spain—there are many things that can still be done. The structures are not so stable. There are so many ways in which you can reinvent things.

RCA: Yes. We have a very interesting city and a very interesting university, for example, and I’d like to say that good things are happening in the city, in the country, in the university. I think that if we are a neoliberal lab, we can answer some things from here, because we are in a very particular space.

JW: Did you say “neoliberal lab”?

RCA: Yes, yes. We are not Ciudad Juarez, and we are not Chile, which was the first neoliberal lab in Latin America, but we are nonetheless a neoliberal lab. We have to think local reality and global reality from our particular position. I think we can find, if not some answers, at least some perspectives. Some different ways of thinking, of organizing. As a lab, as an academic lab, as a cultural lab, we have a possibility to exist in a different way. Which is political, also.

SGA: I mean, that’s our infrastructure. Thought. That’s the only thing we have so far. That’s why we haven’t asked for any financial support from any institutions, that’s why we also decided to make this lab outside of the realm of our institution, UNAM, which could probably give us some sort of support, but would also bind us to all sorts of administrative things. That would be very difficult: we would be judged according to parameters that are not related to what we do. 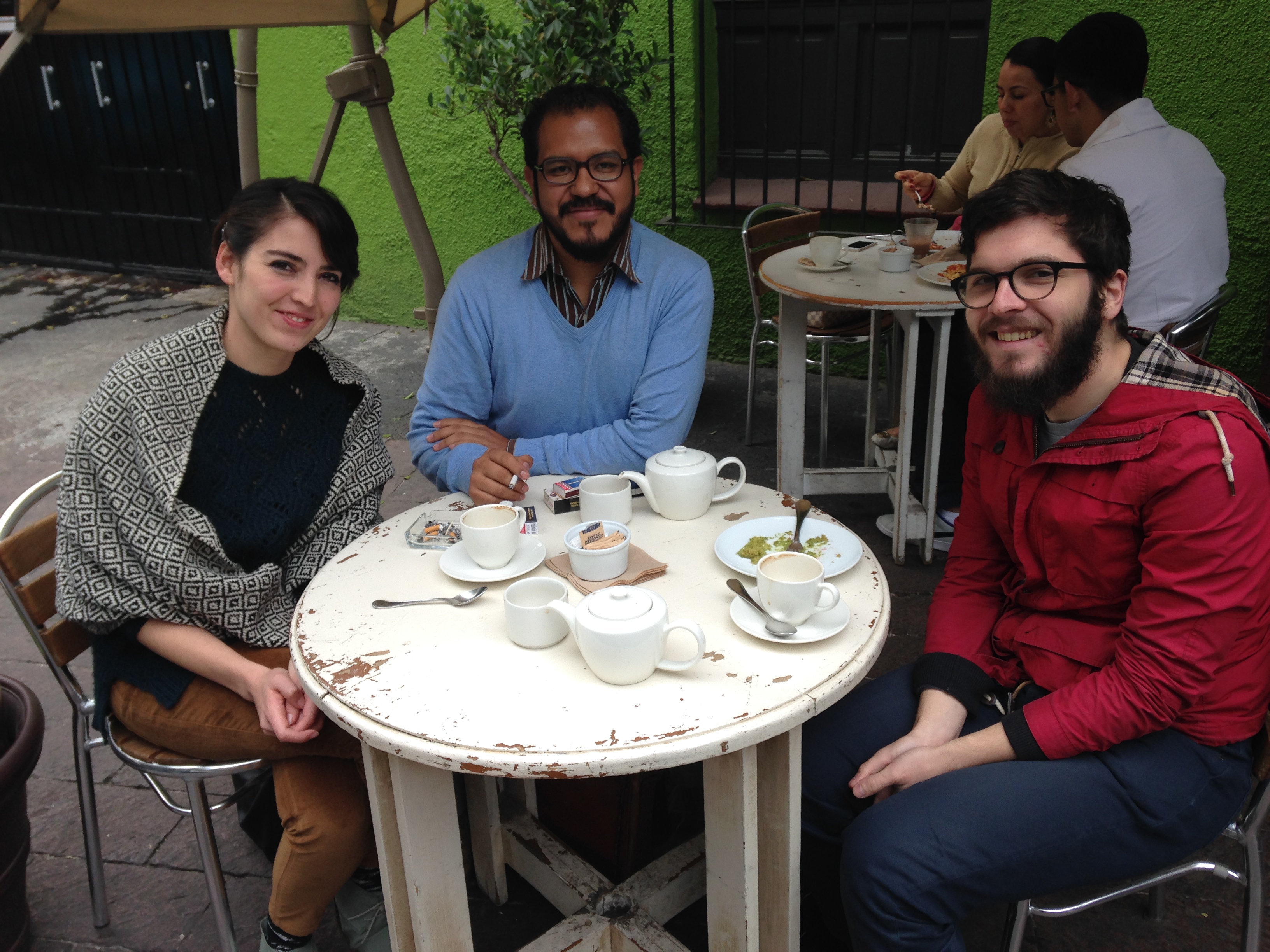 Cinthya, Roberto, and I.

Roberto Cruz Arzabal is a PhD candidate in the Faculty of Philosophy and Letters at UNAM and a member of lleom. His research interests include post-digital literature, object-oriented ontology, conceptualisms, materiality and virtuality of poetry, material culture, and intermediality.

Cinthya García Leyva is a Masters candidate in the Faculty of Philosophy and Letters at UNAM, a member of lleom, and a curator. Her research interests include intermediality, sound art, materiality and virtuality of poetry, and objects.

Susana González Aktories teaches in the Faculty of Philosophy and Letters at UNAM and is a member of lleom. Her research interests include intermediality, experimental sound and/or visual poetry, applied semiotics, and materiality and virtuality of poetry.

Jacob Wick is an artist, writer, and improviser who lives in Mexico City. Go ahead, subscribe to his quarterly feelings.