“I Am A Child Of The Light, Student Of The Dark,” Phillip Hanson at Corbett Vs. Dempsey

I have always been intimidated by poetry. When I think of poetry, I recall an elementary classroom–a noiseless space scattered with uniformed children and indistinct faces neatly arranged in square sections of four desks. I recall a voice that I do not hear in my memory but I know it had existed. The voice reads the poetry–line by line–and reveals the invisible intentions and underlying meaning of each word. In my recollection, I stare hopelessly at an unknowable arrangement of words, desperately yearning to know how the voice could infer all of this meaning from this senseless pattern of chaos.

I still feel this twitch when I am faced with poetry, especially colloquially brilliant poetry–the type of verse that belittles my ability to comprehend my native tongue. There is always a good chance that I won’t get it–that I won’t understand the cadence or the meaning and I will leave yet another encounter with the genre unfulfilled and feeling inadequate. In Phillip Hanson’s latest show at Corbett vs. Dempsey, “I Am A Child Of The Light, Student Of The Dark,” I had respite from my deficiencies. 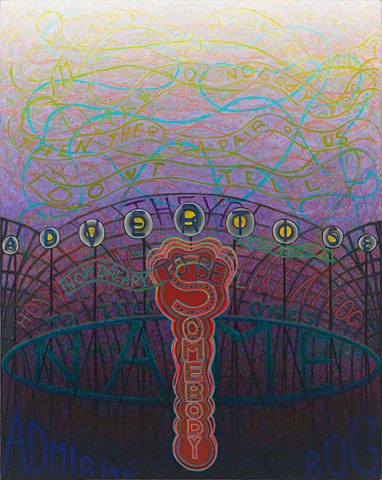 Phillip Hanson is a crafty veteran who has never rested on his laurels or let institutional attachments limit his range. Alluding to the Chicago Imagists as a way of situating his paintings within the context of the establishment seems a disservice to Hanson’s evolution as an artist and painter whose work has grown exponentially since that historical waypoint, but there are certain aesthetic tendencies that exist as a reminder of Hanson’s beginnings.

Such a reminder might be Hanson’s palette–a saturated and at times electric color that refers to the 1960’s underground comic culture that is known to have influenced the Imagist’s work. Though in this grouping of work–as the title of the show suggests–Hanson puts this electric palette to work. He utilizes light to draw his audience into his paintings–just as a bug would be drawn to the streetlight. However, the zap you get when you arrive within inches of these paintings doesn’t kill you–it is more of a pulsing energy that continuously reverberates in Hanson’s color schematics.

This forced proximity Hanson achieves is an essential element to the success of these paintings, which deploy the words of William Blake, Emily Dickinson, and William Shakespeare in a reticulation of architectural space that seems to exist without consequence. As the eye and brain attempt to follow a line of poetry unto the next line, Hanson breaks that continuity with form–he denies that structure to forge anew the way poetry is consumed and thus, understood. It is in the visual language that this text is articulated and this strategy undermines our rationale–or what we have built (in the English language) as our methodology for creating images within our imagination through text by reading left to right and top to bottom. In this way, the poems become more accessible to a deficient reader, such as myself, and the paint speaks in no definite servitude to text.

While the large paintings in the main portion of the space are luminaries that are difficult to pull away from, there are a few smaller gems toward the rear of the gallery that recall the work that Hanson has included in the 2014 Whitney Biennial. As in the Whitney show, these works offer a moment of intimacy with the artist–a magnification of Hanson’s deft hand as well as a reprieve from the noise in the surrounding space. In both shows, these small works are precisely placed and welcomed juxtapositions to their environments. 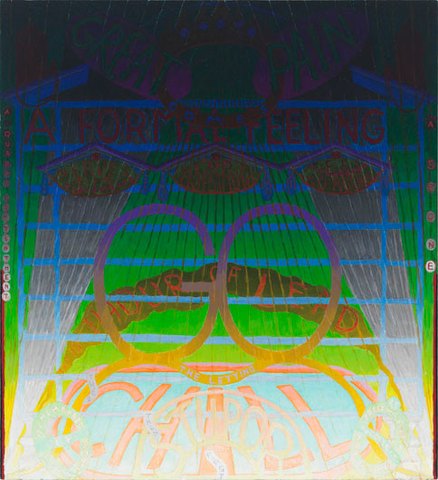 Hanson’s iterations of these poems seem to pronounce a very personal reading of the originals–an emotive response that has generated an impetus to paint. Through his paintings, Hanson releases these emotions in the imagined forms produced through the words and rearranges the words as formal considerations for the paintings.

In this very telling title, “I Am a Child of the Light, Student Of The Dark,” Phillip Hanson alludes to a surrender–an annunciation of his humanity and a loss of control. The words may be someone else’s, but the arrangements are Hanson’s and his understanding of the grand narratives that ground these poems are the swinging doors through which all of us can pass.