Who Wore it Better!?

It’s the megamax edition y’all. Twins are apparently in, and we’re seeing double. We had so many WWIB? options this week, we couldn’t just pick one. They’re too good!

Will the real Anne Wilson please stand up? 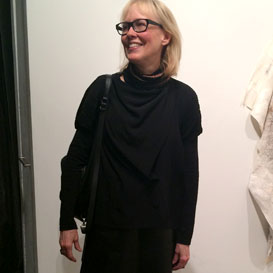 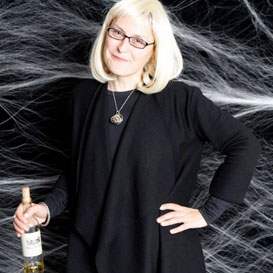 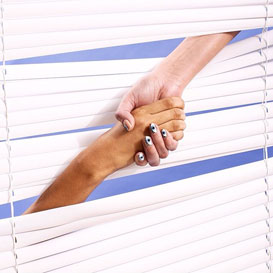 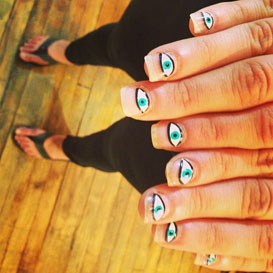 We’ve been big fans of Miss Pop Nails for a while but we’re having serious envy over this look for Refinery29 in October photographed by David Brandon Geeting. Time to upgrade our look from last summer photographed by Heaven Gallery’s Alma Wieser.

She sells sea shells by the… you know the rest. 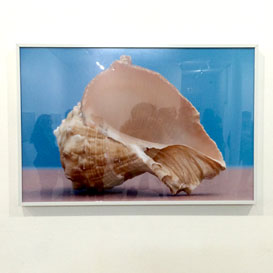 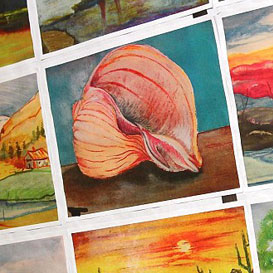 Was super interested to learn that Robert Chase Heishman’s new body of photographic work is based on still life paintings by Guantanamo Bay inmates. Learn more about the paintings here and see the paintings at LVL3 where Heishman is exhibiting alongside another triply named artist, Adam Parker Smith, through December 14th. 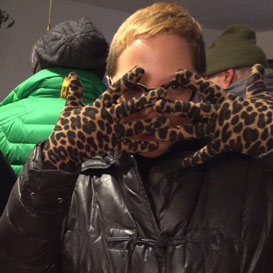 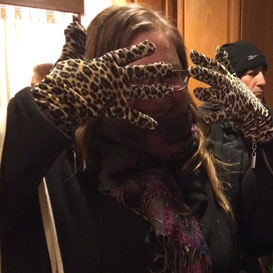 Are you my boyfriend? 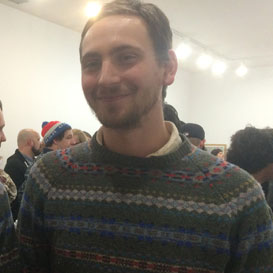 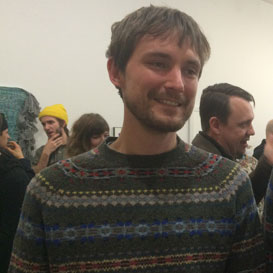 No? How about you?

Header features a detail from Dan Gunn’s piece To fan No. 2, 2014, Dye and polyurethane on plywood, 22 x 88 inches in his exhibition at Impromptu Airs on view at Monique Meloche Gallery until January 3rd, 2015.

Seriously! We want to hear from you now more than ever as we transition into managing the Bad at Sports blog! 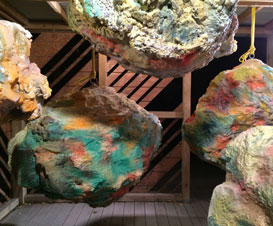 Interplanetary showers on the horizon. PLANETOIDS by the Sarah and Joseph Belknap at the Franklin Outdoor on view until December 14th.

Please don’t let this be the last time we see you until Spring! 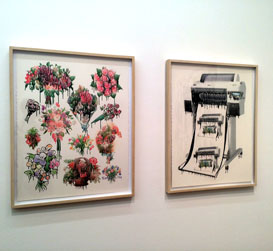 Can’t get enough of this new work by Aron Gent at Devening Projects. Recommend that you see this work before the show closes on December 6th. 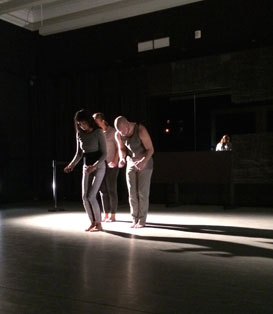 Performance shot from The Conviction of Pearl Dakota. We were pleasantly surprised by the return of J. Soto to Chicago for their choreographic debut at the Cultural Center. Part of “SPINOFF 2014: Contemporary Dance Made in the Midwest,” Soto’s piece was inspired by trips to the Cook County Clerk in 2012-13. Modern dance with line stanchions? Unlikely combo, but we’re into it. 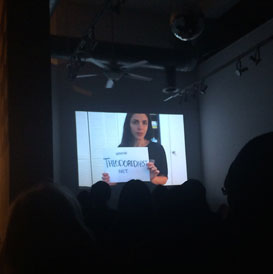 Who’s that annoying person taking photos during the Hybrid Theory screening by Theo Darst and Jennifer Chan? Oh, that’d be me. At least the artists didn’t go through with their plan to play the entire Linkin’ Park album by the same name throughout the entire screening. 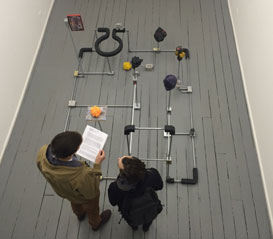 Work by New York based artist Jacques Louis Vidal on view at The Hills Esthetic Center on view through December 14th. 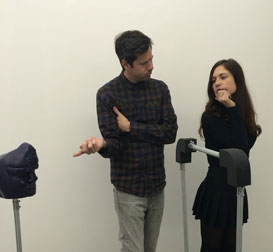 Friend’s of WTT?, artist Eric Fleischauer and AFC’s Corinna Kirsch showing the world how it’s done at The Hills opening for Jacques Louis Vidal’s Nothing is Possible In There is No Future. 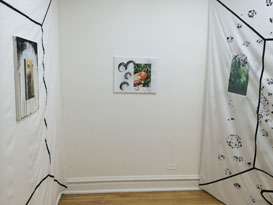 Check out the show and look out for the hidden painting by Alivia Zivich in her exhibition Bottomless on view at Night Club through December 5th. 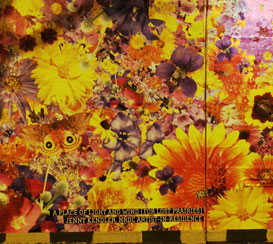 Super sweet new mural outside of the Violet Hour by Jenny Kendler through her residency at the NRDC. We wish that we could show you Kendler’s killer beehive drive fit for the Queen B that she wore at the launch, but the bar was far too dark. Hopefully Chicago Looks got a shot! Instead, you can scan the pollinators on the piece for a free seed packet! Just gotta hold out until Spring. 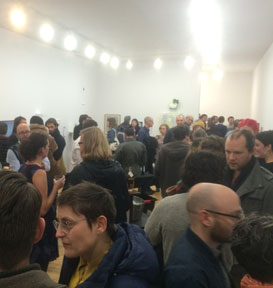 The Inside/Within auction last Saturday made us wish we had more disposable income. WTT> is taking donations! 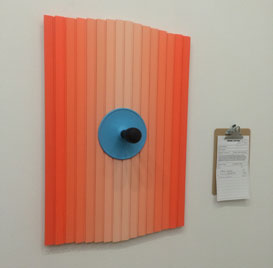 This sweet new Paul Erschen’s piece was hotly bid on throughout the auction. 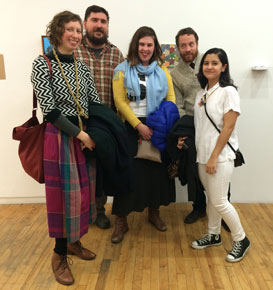 Cutie patrol at the Inside/ Within auction on Saturday, November 15th.

Get your Miami on, Chicago. 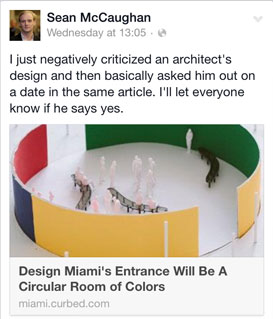 This post is click bait if we’ve ever seen it. Get even more hot and bothered than you already are about Miami with McCaughan’s analysis of Muecke’s design. Warning: Not cute if you’re colorblind.

DfbrL8r’s new space on Chicago Ave. via the gallery’s Facebook.

Open Calls for All

Defibrillator is back with a new space, new curatorial fellows and a new call for artists. On the tails of their announcement that the gallery will reopen at 1463 W Chicago Avenue with an exhibition by German artist Veronika Merklein in February 2015, the gallery has launched a call for the fourth annual Rapid Pulse Festival.

The well-timed announcement pairs nicely with Stephen Bridges Notes on Rapid Pulse 2014 on the MCA Blog. This year the RPF cocurator will be joined by new curatorial fellows Jennifer Mefford and Teresa Silva in addition to Founder, Joseph Ravens, curator Julie Laffin and Assistant Festival Director, Giana Gambino. The deadline for proposals is December 30th at midnight.

In other and somewhat related news: time based work is having a moment. ACRE TV also recently launched a call for Direct Object/Direct Action that is due by November 25th.

Community comes together for very worthy cause.

If you don’t know what Chances Dances is get out from under your rock and watch this video! There’s no arguing with their mission to be the bangingest queer dance party and DJ collective dedicated to building safer spaces and fostering creative expression in and out of the club. If you do know what Chances is and have been to their parties we don’t need to justify why this is a great organization to support. They give us all so much, give a little bit back to them. Oh, and while you’re at it, check out their super cute 10 year exhibition at Lula organized by Aay Preston-Myint.

The anticipation is killing us, so stop it. Seriously. Just donate now and we’ll celebrate together at the 10 year anniversary.