Your guide to partying for a good cause this Spring.

Nothing says Spring like “Gala,” WTT? couldn’t be more excited to see the ice finally THAW. Speaking of, have you bought tickets for the Links Halls annual spring fling? It’s on April 4th, and really more like a three-storey drunk performance art odyssey than a party. Last year I got an sickening sparkly free mani from Aiden Simon at the Girl Don’t be Dumb salon, went inside of a space photo booth, saw Hope Esser ice skate on soap and watched more burlesque than I’d like to admit. For performance art, it’s not too weird, it’s really fun and it’s not that expensive for how open the bar is, what more could you ask from a Thursday night? And the inclusion of DJ CQQCHIFruit and La Spacer this year? Too much.

Enough gushing. Clearly, this benefit season is going to be huge, but don’t worry, WTT?s got you. Here are some notes on the best auctions and charity bashes around, in my not-so humble opinion. Can not wait to see what everyone looks like without a coat on!

Spotted: Todd King getting his feet did at THAW in 2013. Andrew Mausert-Mooney does his best Jesus in the front.

You already know the scoop, tickets can be purchased through their website. 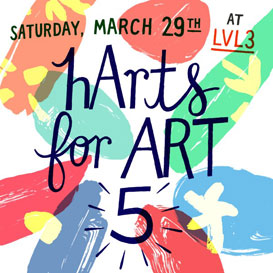 LVL3’s annual benefit auction is known to bring great names at reasonable prices with all works starting at $30. Past years auctions have featured Jon Rafman and Israel Lund amongst others. This years is no exception. We also love the LVL3 auction because the raffle prizes are copious and always awesome and it doesn’t hurt that each year the event benefits local non-profit, Arts of Life. Learn more about the auction and the organization here on the LVL3 website. Full disclosure: I take no prisoners on the auction floor. The event takes place on March 29th from 6 to 10PM at 1542 N. Milwaukee Ave. Last bid is accepted at 9:30PM so be on time!

Sandwiched comfortably in-between the LVL3 and R&C auction is the Summer Forum fundraiser and art auction at everyones favorite bite-sized boutique, TUSK. There are quite a few repeats from both LVL3 and the R&C auction, though it doesn’t look like anyone got the hat trick. E-Dogz will be on hand, serving some serious benefit crossover and unlimited food with the purchase of a ticket ($25 presale or $35 ATD). Advance online bidding begins March 31, and the IRL event starts at 7pm on Saturday, April 5th at TUSK, 3205 W. Armitage Ave.

You don’t have to be Hamza Walker to know that Roots & Culture’s Eric May throws some of the best events in Chicago. Did someone say sangria and tapas? The lineup for the auction is pretty impressive too. Britton Bertran wasn’t kidding when he called the night’s auction list an Who’s Who. The List features some of my favorite Chicago art luminaries and at least one Whitney Biennial-er.

oh shit! – @RootsandCulture announced their auction fundraiser for May 3 (always a Chicago's Artist Who's Who aka The List)

Iâ€™d tell you who I’m excited about seeing at the auction, but I want the art all for myself! Find out yourself, the auction takes place May 3, from 7-11PM at 1034 N. Milwaukee Ave.

Spring benefit season is bookended by major heavy hitters with Threewalls rounding out the season. Another reliably good time, this year’s gala is being held in the spacious digs down south at Mana Contemporary. The full lineup hasnâ€™t been revealed but, I’m jazzed on the news that DJ Earl (who you might have read about in the last edition of the T) will be there. The details might still be a little fuzzy but you can already buy tickets on their site. Looking forward to finding out what a Gunnatowski â€œwearableâ€ looks like. 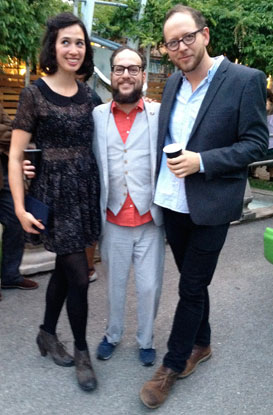 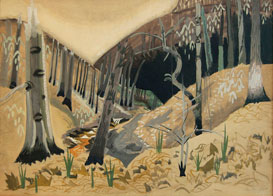 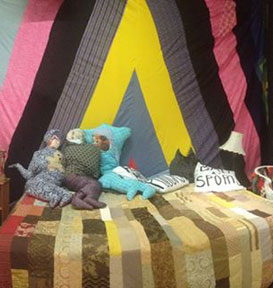 The Equinox is Totes Normcore

Pillows: After being relegated to cameos in the backgrounds of painting and photographic portraits for centuries, pillows are finally stepping out on their own. Last week during the Whitney Biennial/ New Yawk City hullabaloo the internet was plastered with images of the biennial and various fairs, but nothing stood out more than the freaky pillows of Bjarne Melgaard at the #WhiBi. With the help of NY based artist and collaborator Amanda Browder, Bad at Spots finally reached the cutting edge with their Volta bed-in installation and recording booth. As if the original Richard and Duncan aren’t creepy enough on their own, Browder created life-size pillow versions for the Volta booth. Good work, team! 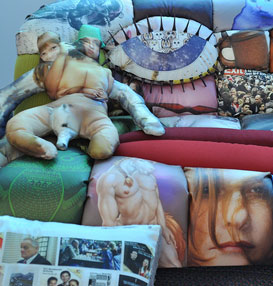 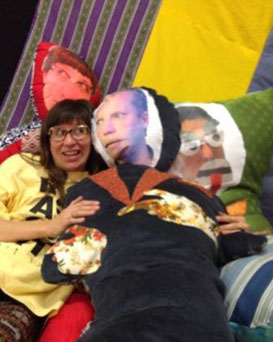 Browder with pillows only a mother could love.

Jesse Malmed: Usually it’s difficult for individual artists to be in enough places at once to qualify as a trend, by that’s no problem for trending artist, Malmed. The co-director of Trunk Show and UIC grad student must not sleep. This past weekend Malmed did double duty at the MCA, as one of The Nightingale programmers on Friday night and then again on Saturday for his own presentation of selections from The Body Electronic: What Television Taught Me about Art, a live televisual lecture performance. Trunk Show also hosted an opening/ 5-act play by artist Brandon Alvendia outside the Multiples fair on Sunday and whatever HALLWALLS2 is had an opening on Monday afternoon. And that’s just over four consecutive days. If you’re interested in getting in on the Malmed Madness, and you clearly should be, the artists’ MFA show at UIC is opening on April 18th. If you feel like waking with the sun tomorrow, he’s also hosting a dawn equinox performance, more info here. 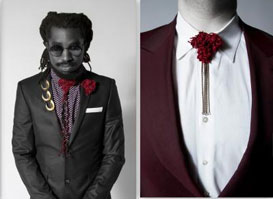 I’ll take all of it! Images from Drapes by Ashley Scott.

Drapes: Thank god standing out and looking good are finally back in style. The Ashley Scott designed brand has already been getting some much deserved exposure for her tremendous style, but the recently released images for the Chicago designers ‘Drapes of Wrath’ Collection, styled by Mister Wallace and shot by Foto by Mateo, are to die for. Not only are the boys beautiful, the accessories are killer (see what I did there?) and SO MANY TASSELS. The collection debuts April 1st, check out the rest of the images and prepare for the wrath on the the Drapes website. 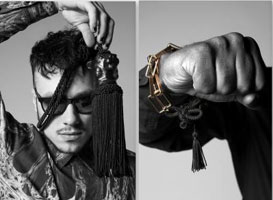 Foto by Mateo gets Draped.

Header image features a work by Kate Ruggeri and Michael Kloss in their exhibition The Vision Collection at The University of St. Francisâ€™ Rialto City Center Gallery which closed March 15th. 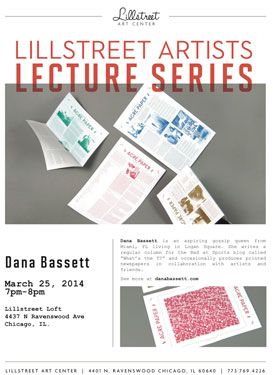 Chicago CD Showcase Back for 2nd Edition at The Mutiny

What? Did you really think we’d spend out St. Patty’s day anywhere else? Sorry Charlemagne Palestine. If you missed last year’s showcase, here’s a little refresher. Don’t do it again! 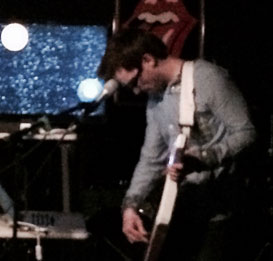 Despite reports that Thorne Brandt would never play, he softened a tough crowd with his flashing lights and “worst samples ever.” 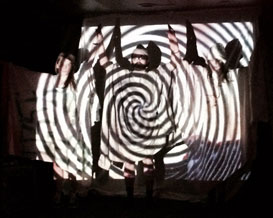 After last year’s majorly lazery blow out, Free the Universe was resurrected as Apocalypse Forever. Their “children of the corn” performance was a seriously trippy affair. 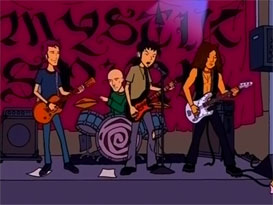 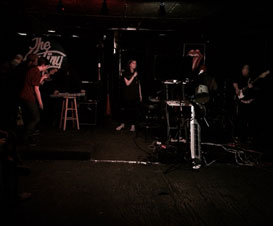 This years showcase saw the merger of two of last years performers. Pajama band made their jammy debut featuring members of Fish, Phish, Ghosts and My Bad at The Mutiny on Monday night.