The Central Techno Authority really came through this past Friday as perpetually late but perfectly on time for not one, but two rounds of seriously heady electronic music. First off, I just want to say that I had been excited for this Oneohtrix Point Never show at Constellation for-ever. I heard from a murky internet source that the show was to be opened by Chicago’s Brett Naucke. However, it later surfaced that Naucke was premiering a quadrophonic composition at Experimental Sound Studio. For this iteration of ESS’s Oscillations Series, Naucke was going cultural with a piece based on Richard Serra’s sculpture Reading Cones. Obviously, I had to go to both. 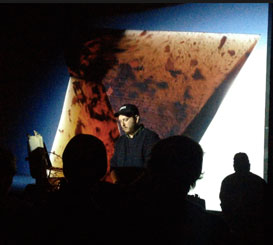 I headed off on the long journey north to ESS on first the 74 east and then the 50 northbound to wherever Edgewater is. Despite the two buses, I arrived right on time to get a seat for Naucke’s set. I closed my eyes and felt like my brain was unraveling, in a pleasant way. Naucke’s 30 minute set was distinctly metallic, and gave off the aural vibe of the sculpture, which itself appears to be some sort of Staregate-like vortex propelling industrial wavelengths into the atmosphere. The sounds were given life and movement through the quadrophonic experience, which immersed the audience who were also fully zoned. The piece culminated with a twinkly modulation that echoed into silence and eased the audience back to reality. My reality was that I needed to get to Oneohtrix Point Never stat!

I unfortunately had to skip out on Alex Barnett & Ken Camden as I boarded the 50 southbound to the 77 back west to Constellation. To be honest, I was a little panicked– I had spaced out and forgot to buy tickets. The show had sold out, but reality wasn’t going to get in the way of my destiny. After another endless bus ride, I arrived at the venue ready to scheme my way inside. Shout out to the slackers who bought tickets and didn’t show up cause I got into the shit no problem. Sat down three rows back, right in front of point never’s Daniel Lopatin right as he began to play.

Lopatin’s sound has noticeably evolved with his most recent release on Warp Records and I was really curious to see how his new sound would translate live. Oneohtrix Point Never was initially known for the mellow post-apocalyptic feel he achieved by looping his Juno 60 and pitched down samples. His set reflected this change. Instead of his trusty Juno 60 dominating his rig, Lopatin’s faced glowed angelically under the ambient light of his Mac laptop. Although the method has changed, the vibe remains the same. The audience was treated to a series of electronic compositions incorporating many of his new techniques including melodious chopped up vocal samples and pulsing synthesizers and a surprising amount of bass and percussion. The pulsating live visuals played off the hyper modern digital Wabi-sabi design of his most recent album covers. The pairing of music and visuals created a polysensorial glimpse into our inevitable cold futures wandering aimlessly in small pods across space time into nothingness. As the set came to close, I felt uplifted. That night the impossible became possible.

On the CTA, time is not linear. Manifest your own reality. 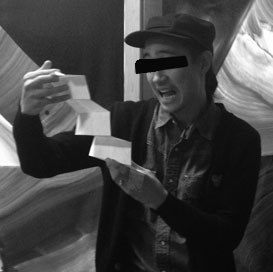 Brandon Warren Alvendia (Chicago, IL) 36 y.o. male Filipino-American is a suspect in the petty theft of 2.5 sentences of a press release text from an undisclosed New York City Art Gallery. The perpetrator attempted to invoke Fair Use Doctrine and thus waived the use of the cryptomnesia defense. The victims will remain unidentified to protect the privacy of their families. Alvendia is expected to plead guilty and accept his sentence of a lifetime of community service. 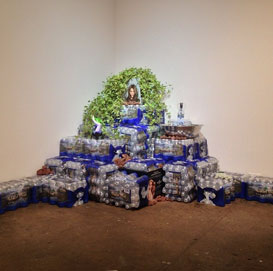 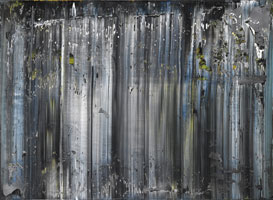 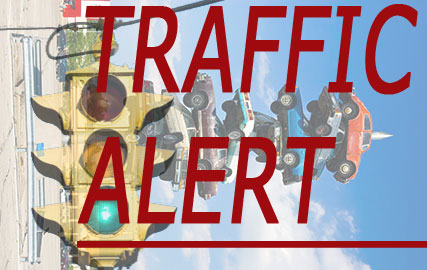 Tired of the conventional potholes and run-of-the-mill cracks that dot and line every block of the city? Bike commuters were no doubt asking for a new kind of obstacle, and Chicago has answered the call. Introducing an impressive, and hopefully temporary, cement addition to the already difficult cycling conditions at Damen and Walnut. 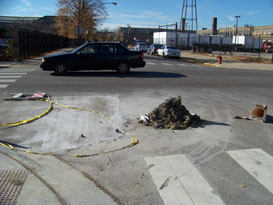 It’s existed long enough to earn some traffic cones and warning signs, though the majority of the safety equipment has fallen over and drifted into the bike lane. Other rough-riding winners of the week include the nearly bike-proof eastbound stretch of Grand, between Pulaski and Central Park, and the viaduct on 23rd street, between Western and Rockwell, which last month featured a white loveseat that was perfectly situated in the middle of the craggy westbound lane. Keep reading the Traffic Report for more roadway gossip and Chicago street surprises in the future!

Impossible to catch them all, but here’s some highlights from our night all over the town 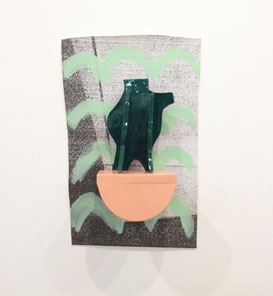 A gem by Annie Strachan. at LVL3’s Emerald City. 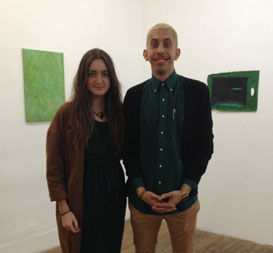 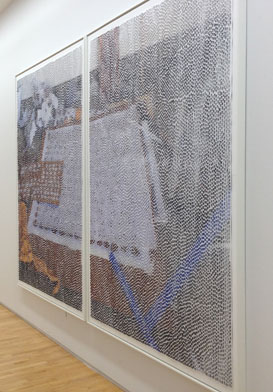 Cutris Mann’s new cutout images of his studio are to die for. 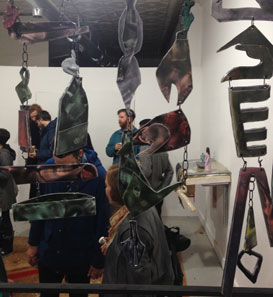 A detail of Daniel Luedtke’s large scale mixed media sculptural work at the opening for Secound Primary at 3433. 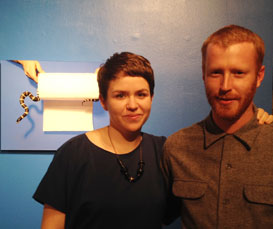 Carson Fisk-Vittori and Derek Fretch during their triumphiant return to Chicago for the opening of Women Weed & Weather at Carrie Secrist Gallery.

SO, here’s the T. Last week I was in NY for a wedding at Bryant Park.* The affair was black tie and I arrived in NY in desperate need of a manicure. In an usually unusual turn of events, I ended up in the East Village apartment of Miss Pop Nails, fashion manicurist to all my favorite drag queens, celebrities and designers. Being the So Fla yentas that we both are we totes hit it off, and Miss Pop gave me the most to die for manicure I’ve ever had. 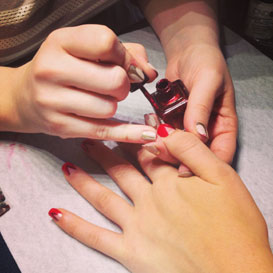 Since I can’t keep anything to myself, here are some masterpieces nails that Ms. P created for the Guggenheim before the project was unfortunately scraped due to some “other” museums nail salon. 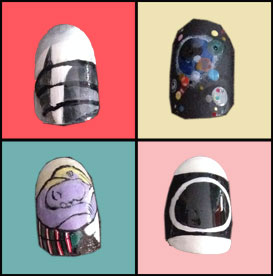 If you’re like me, and can’t get enough of fly nails, follow Miss Pop Nails on tumblr/instagram and check out her tutorials. Here’s how to do my wedding nails on Cosmo. Living for her Warhol-inspired flower mani and the project with KAWS! 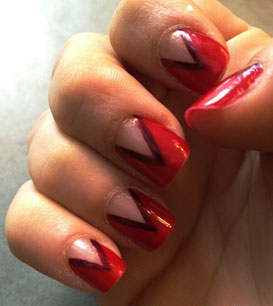 I died.
*A shooting went down on the ice rink the same night as the wedding! That was it’s whole own crazy story.

Header image is a detail of work by Carson Fisk-Vittori in her current exhibitions, Women Weed & Weather at Carrie Secrist Gallery in the West Loop through January 4, 2013.