Carrie Schneider Untitled, Pines, from the series Derelict Self, 2006-7 C-print image from collection of Evan Boris and Monique Meloche, Chicago.

Amidst the bountiful harvest of goodness promised by this weekend’s big Chicago gallery openings, I encourage you to make time to check out a show that’s already been open for several weeks:Â  Carrie Schneider’s solo exhibition Carrie Schneider: The Artist’s Hand, which is on view through September 26th, at Robert T. Wright Community Gallery of Art in Lake County, IL (about an hour outside of Chicago). Schneider, who moved to New York City from Chicago last year, shows photographs, films and videos spanning her early work through her latest projects. I haven’t seen the installation yet (though I’m getting in the car and getting my ass out there to see it this afternoon, as soon as I finish this post), but I did write the catalogue essay for the show (a very brief excerpt from that text follows below). If you’re a fan of Schneider’s alluringly creepy, evocative and emotionally complex imagery, don’t miss this exhibition–it’s one of the most comprehensive presentations of her work yet shown.

“The hand takes on a personality of its own in Carrie Schneiderâ€™s photographs and films. Whether grasping or groping, caressing or scrubbing, shadowing or doubling the movements of another person, the hand conveys a desire for connection and cathexis in abstract, gestural form. In the video On Momâ€™s Lap (2006), we see Schneider curled in her motherâ€™s lap, the latterâ€™s face lying just out of frame. In an attempt to snuggle closer, Schneider puts her hand on her motherâ€™s shoulder. Her mother gently pushes it away. Schneiderâ€™s fingers creep up again, this time more insistently, and is met with countervailing pressure from her motherâ€™s hand, which gently but firmly moves her back in a cycle of push and pull that continues until a temporary compromise is reached.

Itâ€™s a primal dance, this tango of palms and fingers, parent and child, self and other, one that anyone whoâ€™s experienced the messy conundrums of human intimacy (and that means almost all of us) has danced many times before. Whether it takes the form of a mirrored pas de deux or an awkward clinch on a barroom dance floor, the dance, in Schneiderâ€™s lexicon of images, metaphorically enacts the ambiguous relation of self and other.”

Carrie Schneider Untitled, Library, from the series Derelict Self, 2006-7 C-print image from collection of LFC/Martin Zimmerman 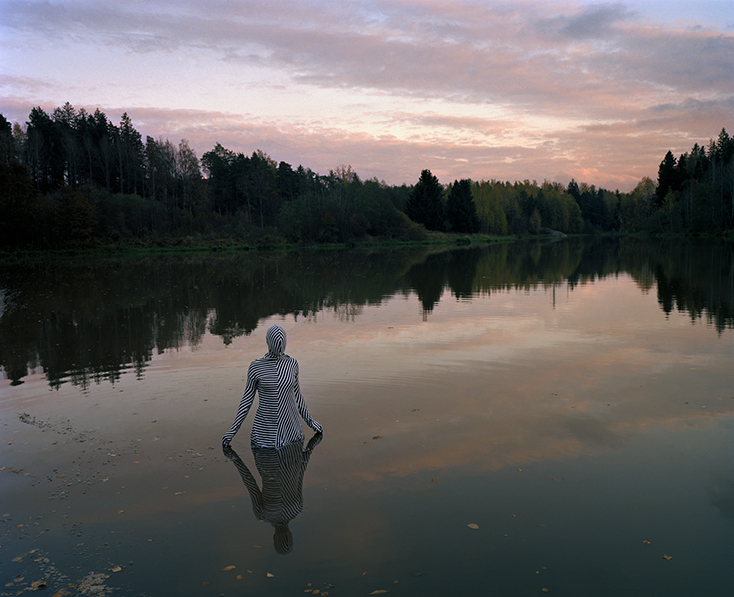